How a partner's love and devotion can help you beat cancer

Breast cancer survivor Teresa Tam and her husband, Akio Nishida, share a special moment during her last therapy session in 2013.

When Teresa Tam was diagnosed with Stage 2 breast cancer in 2011, she was devastated. Then 33, she was fearful of the treatments she would have to endure to tackle the illness and worried that she might not live to celebrate her 40th birthday.

“Thankfully, I was told that the cancer was treatable,” says Tam, from Hong Kong, who had surgery, followed by chemotherapy, radiation therapy, targeted therapy and hormone treatment. “But I was still afraid because I didn’t know what the future had in store.”

Tam’s husband, Akio Nishida, was also scared, but tried to be strong for his wife. When she told him the bad news, he reassured her that he would not leave her side.

For the next couple of years while she underwent treatment, Nishida accompanied his wife to medical appointments and chemotherapy sessions, and gave her all the space she needed to express her fear and frustration.

“I didn’t want her to feel like she was in this alone,” says Nishida, who was born in Japan but has lived in Hong Kong for nearly four decades. “The side effects of her treatment made her very emotional so I did my best to comfort her. I also read up about breast cancer and researched ways to keep her immune system strong. I just wanted her to feel supported, understood and loved.” 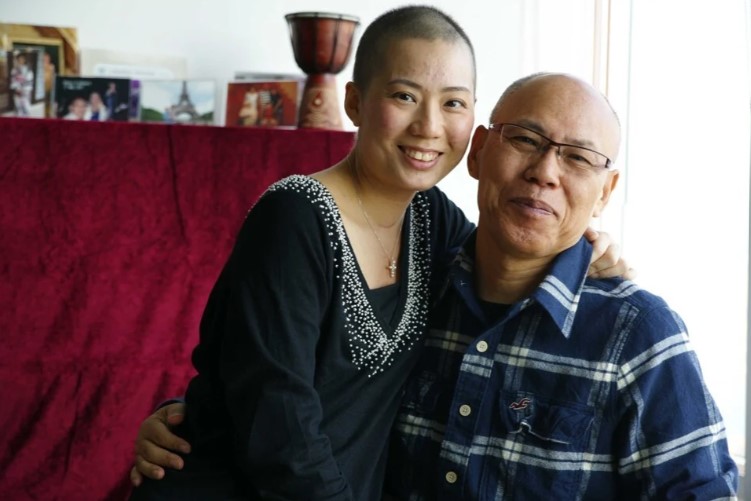 In addition, Nishida played the guitar, wrote poems and drew endearing illustrations to cheer her up. To keep her hopes alive on especially difficult days, he would remind her about their plans for the future. He even left his company so that he could spend every moment with her.

Her husband’s attention and care went a long way towards helping Tam heal, physically and emotionally. Today, nine years after her diagnosis, she says that she is “fully recovered” and happier than she has ever been. 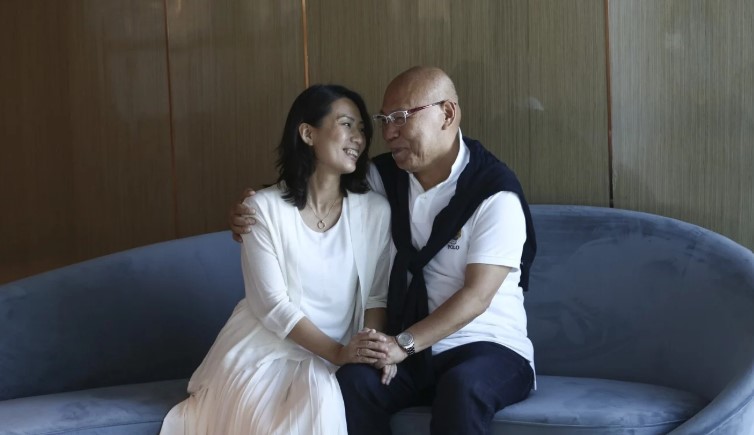 “I’m a tough woman, but I think my journey would have been more stressful had Akio not been by my side,” Tam explains. “Thanks to him, I told myself that I had to overcome the mental obstacles. Chemotherapy was one of the worst things I’ve ever had to go through, but with his love and encouragement I found the strength to endure it. As bleak as my situation seemed at times, Akio kept me going.”

Being in a fulfilling romantic relationship can indeed improve one’s ability to deal with – and recover from – a health crisis. New research from Ohio State University in the United States found a link between a happy partnership, reduced stress and lower inflammation in breast cancer survivors.

The research, published online in June 2020 in the journal Psychoneuroendocrinology, revealed that the more satisfied breast cancer survivors felt in their romantic relationships, the lower their perceived psychological stress. 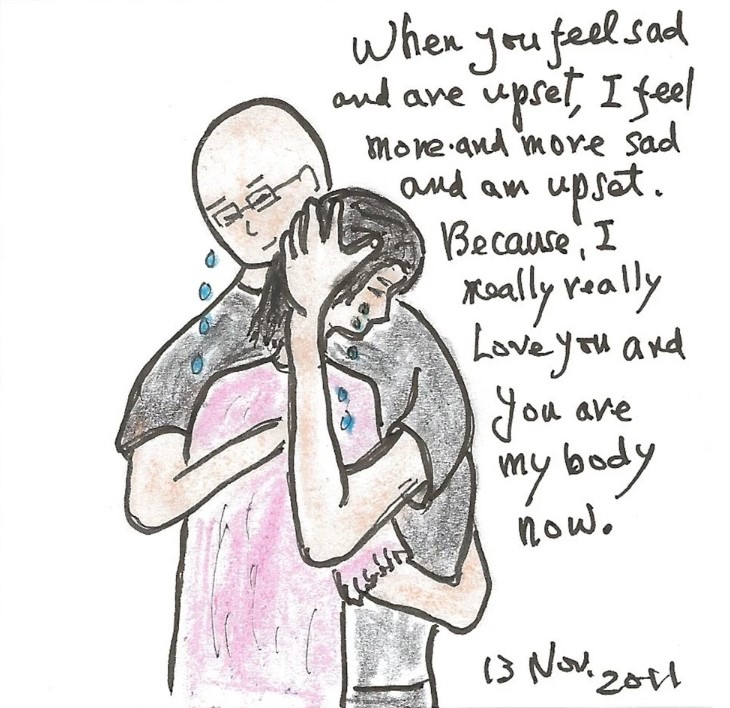 A drawing by Nishida to inspire Tam after she was diagnosed with breast cancer in 2011. PHOTO: Akio Nishida

These two factors were associated with lower markers for inflammation in their blood.

Keeping inflammation at bay is essential to promoting health, especially in breast cancer survivors; chronic inflammation may increase survivors’ risk for cancer recurrence and other illnesses, such as heart disease , arthritis and Type 2 diabetes .

“After a woman is diagnosed with breast cancer, she may experience a range of emotions including shock, disbelief, numbness, anger, fear, anxiety, guilt, grief and sadness,” says associate professor Helen Chen, head of and senior consultant in the department of psychological medicine at KK Women’s and Children’s Hospital in Singapore.

“And certainly, with better coping, her mental state will be well maintained, and with a positive outlook, she will be able to navigate the challenges better, and keep a healthy lifestyle and routine, all of which contribute to good recovery outcomes.”

Conversely, when her stress level is high – such as when faced with losing a breast, having to withstand harsh cancer therapies like chemotherapy, or not being able to look after her children, for instance – her body may respond with an abnormal immune response akin to chronic inflammation. This in turn may adversely affect the recovery process.

But psychological factors are not everything when it comes to battling breast cancer.

Chen says that if the cancer is picked up late and is of an aggressive nature, or if the cancer treatment fails for whatever reason, no matter how positive or courageous a woman is, there may be little she can do to influence the prognosis.

“Often, she is told to be strong, to fight the cancer – it almost feels as if the burden is on the woman to fight, when in reality sometimes the illness will progress as it will,” she points out. “So it is important to remain supportive and soothing, to help her feel cared for.”

If you are dealing with breast cancer but are not in a satisfying romantic relationship, Chen suggests seeking emotional support from friends and loved ones, or even health care professionals such as social workers and psychologists. Support groups are also a great source of comfort.

Other ways to improve your emotional well-being: meditation, prayer, or other practices that help you feel more at peace; allowing yourself private time and space; paying attention to your physical needs for rest, nutrition and other self-care measures; expressing your feelings through journaling, painting, music, dance or photography, for example; taking walks; creating a healthier home environment; and finding out how other patients and families cope with cancer. 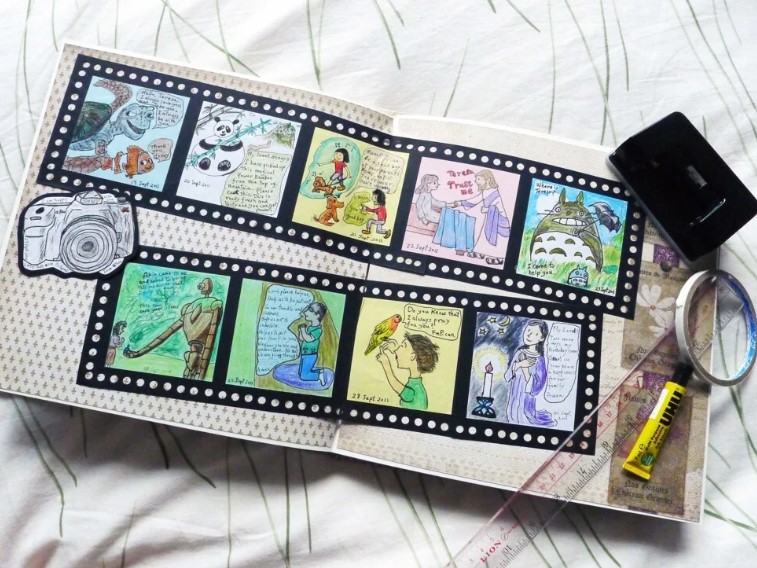 Drawings Nishida made for Tam to cheer her up while she endured harsh breast cancer treatment in 2011. PHOTO: Akio Nishida

Tam says: “The emotional aspect of dealing with breast cancer is certainly tough. Generally, women tend to hold their emotions in, or they are so busy seeing to others’ emotional needs that they end up neglecting their own.

“This is where being in a fulfilling romantic relationship comes in. Having a caring, empathetic and sympathetic partner, and knowing that you are supported and loved, doesn’t just deepen your connection as a couple and help you evolve as individuals; it also makes what is often an emotionally complex journey less taxing and traumatic.”