Makiyo was 17 when she won a photography competition. She spent the grant money on her first DSLR camera and hasn't stopped shooting pictures since.

"That moment of recognition fuelled my passion in photography, prompting me to make a decision to pursue it fully," she says.

After a year of working at two local fashion start-ups, she sold everything she had and bought a ticket to Milan as she wanted to pursue fashion photography in one of the biggest fashion capitals in the world.

A few months later, she moved to Barcelona, where she found her way by cold calling agencies and brands, and introducing herself, as she didn't know anyone there and barely spoke any Spanish.

She had a similar approach to her passion as well, not having had any formal training in photography. "I had to learn everything on the job. I had to juggle between my work and developing my own photographic vision," she says. "I assisted different artists, taught art and English to kids, while building my photography portfolio."

Her first breakthrough happened when she was hired as a fashion photographer for a major fashion company and, after a year there, she quit to become a freelancer.

In 2018, she moved to London, and since then, she has shot campaigns for Miss Selfridge and Kurt Geiger, and had the opportunity to travel to New York, Paris and Tokyo for projects.

Her work has also appeared in publications such as Conde Nast Spain, Vogue Spain, Glamour Romania, and Instyle Mexico, among others. 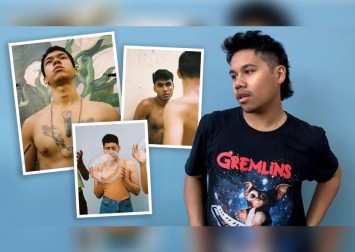 Because the Covid-19 pandemic impacted her business a fair bit, Makiyo had to come up with new ways to keep it afloat.

"I started offering portraits in my neighbourhood. This project had documented over 100 households during-and-after lockdown and I was also able to contribute a part of each booking to the Black Lives Matter UK fund during the months of June and July last year," she adds.

And if you're wondering why her pictures have a film-like quality, it's because she is a huge film buff, and that influences the narrative in her work.

"Before the pandemic, I would go to the cinema a few times a week, and when we were on lockdown in London, I would watch a film at home almost daily. I love cinema as it allows me to see art in the form of moving images, and helps me to relate to the characters and stories in a million ways."