Indonesia's iconic Indomie is beloved by millions, from students in Europe to prisoners in Australia

More than 15 billion Indomie packets are produced every year.

Indomie has reinforced its status as Indonesia ’s most-loved export product, after being the only brand mentioned twice in New York Magazine ’s latest rankings of the world’s best instant noodles.

The list saw a group of US food writers and chefs ranking 10 of their favourite instant noodles, and classified them into three categories: soupy, saucy and spicy.

Ho told the magazine that she had been eating Indomie since she was “in elementary school, when my cousins and I would prepare ourselves instant noodles when our parents were out”, adding that her favourite topping was a sunny-side up egg.

In Germany, PhD student Pia Dannhauer told This Week in Asia that Indomie was her “guilty pleasure [meal] for lunch between lectures” during her undergraduate studies in the Netherlands.

“My flatmates and I could literally look at each other and say, ‘Indomie?’ simultaneously any time we were actually planning on cooking together,” the 27-year-old said.

As Dannhauer is a vegetarian, her favourite Indomie is “the vegetable one”, which only costs around €0.40 (S$0.70). Typically, she only cooked what was in the package, although she once felt a little more adventurous.

“I actually once made a noodle salad from it, with some added Napa cabbage and a dressing made from the spice pack, plus some soy sauce and spices,” she said. “The taste was somewhere between umami and far too salty, I would say.”

The experiences by Ho and Dannhauer explain why Indomie is a cult favourite instant noodle brand worldwide: it is tasty, cheap, versatile, and convenient.

The iconic Mi Goreng flavour was launched in 1983, and has been beloved by Indonesians and overseas fans ever since. When its creator, Nunuk Nuraini, died in January this year, it triggered nationwide grief and made global headlines.

To cater to local palates, the noodles sold outside Java island carry chilli powder instead of chilli sauce, but the rest of the ingredients remain the same.

Overseas, the content is similar as Java’s version of mi goreng, but the taste is slightly different, according to Redha Kinanti, an Indonesian living in New Zealand.

“The taste of the Indomie sold here is not as yummy, maybe the MSG [content] is different,” she said.

It’s not the first time Indomie has made it to a rankings list. In 2019, the Los Angeles Times ’  Instant Ramen Power Rankings placed Indomie’s barbecue chicken flavour on top, due to its “totally and utterly heavenly” flavour. The classic Mi Goreng was ranked at No 10 as the author deemed it “slightly too sweet”.

Indomie lovers have various ways to enjoy the noodles. In Indonesia, a classic way to enjoy it is with a simple topping such as a fried egg or chops of chillies. Others have also cooked it into burgers, doughnuts and martabak (folded omelette pancake).

In neighbouring Malaysia, there is a restaurant dedicated entirely to Indomie. Called Indobowl, its menu consists of meals such as Indomie topped with salted-egg chicken or rib-eye.

In Nigeria – where Indomie is so popular it is a synonym for noodle – seafood and vegetables are sometimes added into the mix, while in Australia, a local coffee shop has turned it into a toastie. 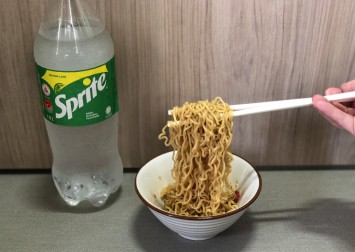 In 2019, an Australian shop’s mi goreng-scented candle caused an online uproar among Indonesians.

In 1990, Liem set up a company called Panganjaya Intikusuma, later renamed Indofood Sukses Makmur, and became the parent company of 18 of Salim Group’s food companies, including Indofood Interna Corporation, the producer of Indomie. This marked the start of Indomie’s expansion overseas, including the first headquarters in Nigeria to serve the African market in 1995.

Today, Indomie is available in some 100 countries, and more than 15 billion packets of noodles are produced every year. Aside from Nigeria, Indofood also runs factories in Kenya, Morocco, Serbia, Saudi Arabia, Egypt and Turkey.

Indomie’s popularity has prompted many to pay it homage, such as through rap songs.

So popular is Indomie in Africa, in December last year a researcher in Ghana revealed that Indomie was used a tool to lure young girls into the sex trade, alongside cellular credit and e-money.

In 2018, Australia’s Nine News Melbourne reported that the Victoria state government spends more than A$500,000 (S$500,000) for a two-year supply of Indomie – the favourite instant noodles of inmates there.