Will Smith and his wife Jada Pinkett-Smith at the Academy Awards ceremony in Los Angeles on March 27.

Will Smith's wife Jada Pinkett-Smith has hogged the headlines since her Oscar-winning spouse "smacked the s***" out of comedian Chris Rock during the 94th Academy Awards ceremony on March 27.

As far as narratives go, she's been saddled with the dubious honour of triggering Smith's reaction to Rock's jibe at her shaved pate, which has since educated the world about alopecia causing hair loss.

Smith, 53, has been lying low since slap-gate. However, rabid followers are hot on his trail; in fact, all the way to a private airport in Mumbai, where he landed last Saturday (April 23).

He is ostensibly visiting Sadhguru, the 64-year-old globetrotting yoga guru famous for establishing the Isha Foundation near Coimbatore, in the southern state of Tamil Nadu, where the spiritual leader operates an ashram and a yoga retreat.

Smith's India visit is his first overseas trip since his slap-giving which — for those who have been instead focused on other major world events — cost him a 10-year ban from attending the awards ceremony, and some lucrative projects under Netflix and Sony.

The actor has also resigned from the Academy of Motion Picture Arts & Sciences, but kept his Best Actor Oscar for his lead role in King Richard (2021).

Although Smith himself gave no media interviews, eyewitnesses say he looked "personable" and "warm".

Ajay Kandhari, a Mumbai-based textile exporter, who was at the airport when Smith arrived, speculated: "He seemed to be on a spiritual visit as he was accompanied by a robe-clad monk wearing a rudraksh (religious beads) necklace."

The sighting has led some Indians to conclude that a "troubled" Smith had come to India for spiritual solace; reportedly not his first such sojourn to the country. In 2020, the actor and his family spent time with Sadhguru at the Isha Foundation.

When we destroy the Soil, we are destroying future life. As a generation, we have the responsibility to turn this around. #SadhguruQuotes #EarthDay #SaveSoil pic.twitter.com/pqLrSVfUZz

Where is the guru?

It is nonetheless unclear if Smith has met the spiritual leader in person.

Sadhguru himself remains elusive, with his media team stating: "Sadhguru is on a global tour to promote the Save Soil movement", and that "Sadhguru has not met Will Smith recently".

Indeed, Sadhguru's Instagram account — he has 7.8 million followers, compared to Smith's 64.7 million — indicates that he is currently not in India, but on a 100-day, 30,000km biking tour across Europe to raise awareness of soil erosion.

In addition to having authored several books and frequently speaking at international forums, he is known for his love of extreme bikes, and often rides solo through countries.

Read Also
Will Smith spotted in India, said to be there for 'spiritual purposes' 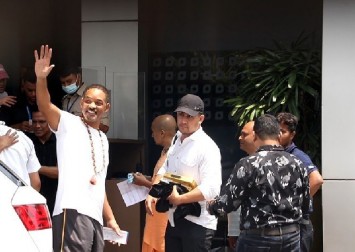 He rode a 350kg BMW K 1600 GT across the US in 2020 as part of his "Exploring Spiritual America" drive, stopping in at the Smith residence then. They shared a mini-vlog on Instagram of them meeting for the first time, showing Sadhguru entering the property on his bike, then meeting Smith and his daughter Willow.

Smith had commented in the since-viral clip: "Sadhguru is in town. I have been following him for a while. He wrote a wonderful book called Inner Engineering. I want my family to meet spiritual people, to start interacting with people who are not hooked on the material world."

In 2019, Smith visited India to shoot his reality show The Bucket List. On the same visit, he drove a rickshaw in the holy city of Haridwar while participating in the "Ganga Aarti", a ritual worshipping the river Ganges. He also shot a cameo in the Student Of The Year 2 (2019) with Bollywood actor Tiger Shroff.

Alas, for all their closeness, it is likely Sadhguru won't see Smith this time.

An ashram practitioner — B.S. Shetty — said that it is "quite possible that Smith's spiritual sessions at the ashram are supervised by other senior gurus as often happens when Sadhguru is travelling".

Smith is among several western public figures who have dabbled in Indian spiritual practices over the years.

Hollywood celebrities associated with Hinduism include decades-old devotee George Harrison, comedian Russell Brand, as well as actor Julia Roberts — who has said she was deeply impressed by Hinduism while in India shooting Eat Pray Love (2010).

"I'm definitely a practising Hindu," she said in a media interview, adding that her family visits a temple in LA to "chant, pray and celebrate on a regular basis".

ALSO READ: 'First time I've seen him go off': Will Smith's mother on the Chris Rock altercation at the Oscars

Founded by the late, controversial yoga guru Rajneesh, the retreat continues to attract high-profile personalities even after the guru's death in 1990.

Singer Lady Gaga too, has expressed fascination with Indian spirituality and said she has read Osho's works.