A ‘group Jade pendant’ piece was found in the excavation of the Changling Tomb from the Ming dynasty in Beijing.

It would be hard to think of a mineral more intertwined with Chinese jewellery as jade.

The earliest history of the iconic green-tinted gemstone dates back 12,000 years, and it has been an essential part of society almost from day one , decorating the bodies and homes of emperors and commoners alike.

During the Ming dynasty (1368-1644), a special type of jade jewellery called “group jade pendants” became a symbol of power, elegance and, eventually, represented an economic transformation of the empire.

Typically hung from cloth waistbands, these pieces of jewellery featured a series of jade carvings held together by metal chains, often made of gold or silver.

According to new research published in Advances in Social Science, Education and Humanities Research , a peer-reviewed journal, the structures of the pendants typically included four distinct “sections”.

The top section featured a large engraved jade pendant, followed by three smaller stones. Then, the chain connected to the largest piece of jade and the piece ended with four small stones surrounding another medium-sized piece of jade.

Interestingly, the designs evolved according to Ming dynasty history. For example, there was a noticeable increase in how elaborate the designs became as the Ming dynasty became more powerful.

However, much of the Ming dynasty’s transformation came under the Yongle Emperor (r. 1402 -1424), who was infamously brutal. Luo wrote: “the political atmosphere was very heavy, and the people did not dare to overstep the limits of their behaviour, and it was difficult to innovate in the arts.”

This lack of creative transformation is noticeable in the group jade pendants, Luo said.

As political and social life eased under the Hongxi Emperor (r. 1424-1425) and the Xuande Emperor (r. 1425 to 1435), the Ming dynasty entered a prosperous period, and the pendants broke out of the imperial palace and into general society, becoming more innovative along the way.

“The use of the jade pendant also gradually broke away from its status symbolism at the beginning of the Ming dynasty and transformed into its decorative nature, being loved by society as a whole,” wrote Luo. 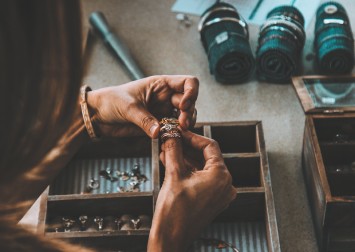 When the group pendant was still a status symbol, it was meant to be worn during weddings or by members of the imperial court.

For the imperial court, the pendants were part of a particular tradition for honouring the emperor.

When a ruler stood, and the pendant was close to their body, courtiers had to bend slightly so their pendants would hang away from their bodies. However, if the ruler leaned forward, and the pendant hung away from their body, the courtiers had to bend or bow deeply so their pendants would come close to touching the ground.

“This reflects the ancient Confucian emphasis on the distinction between the superior and the inferior, telling a person to pay particular attention to the gesture according to one’s status,” Luo wrote.

Because jade emerged in the earliest days of Chinese archaeology, it is uniquely useful for analysing developments in Chinese history.

In the case of the jade pendant groups, the jewellery provided a window into imperial tradition and its eventual transition into an aesthetic decoration accessible to ordinary people.