Jamie Chua, one of the original crazy rich Asians, says she struggles with self-doubt and uncertainty about her work

Singaporean socialite and influencer Jamie Chua has 1.2 million followers on Instagram and close to half a million subscribers to her YouTube channel.

Jamie Chua, a mainstay of Singapore’s influencer scene, is a highly strung woman.

The 46-year-old confesses to being stressed out by “a lot of things” – like when she had to spend $30,000  to replace a limited-edition Cartier earring that she had lost and spent “four days” crying over.

“I am completely high strung,” she says. “That’s why I have a lot of self-care routines – every time I sit in the garden, I burn sage to cleanse the air.”

Chua has 1.2 million followers on Instagram and close to half a million subscribers to her YouTube channel, and was an influencer long before the term was coined.

A regular on the country’s society scene, she catapulted into the public consciousness thanks to a 2016 video tour of her implausibly outlandish “wardrobe” – a labyrinthine space boasting drawers upon drawers filled with Cartier jewellery and diamond-encrusted Richard Mille watches.

The wardrobe’s pièce de résistance is a floor-to-ceiling display shelf housing more than 200 Hermès bags, said to be one of the world’s largest collections. It is less of a wardrobe and more of a museum of luxury goods.

Since then, Chua’s content has evolved to include travel vlogs and beauty tutorials, but the content that remains the most popular on Chua’s channel is almost always about her luxury fashion buys – the more outlandish and expensive the better.

Her top videos include a reveal of a rare Hermès Birkin , a vlog of a shopping trip to Louis Vuitton and Dior, and an unboxing video of – what else? – a Hermès Birkin.

This is not to say that the life of this original crazy rich Asian only revolves around luxury buys: she is just keenly aware of the type of content that viewers like to watch on her channel.

“I actually enjoy doing normal things,” she admits. “I can’t be perpetually at a shopping [centre]. That makes me seem empty and a bit vacuous – and I don’t want to seem like that kind of person. I want to be seen as a real person, someone who’s more relatable and human, because that’s what I am, honestly.”

During Singapore’s lockdown in 2020 , Chua said she (like many other bored and isolated people) took to gardening. She began landscaping the gardens of her $63 million mansion, a task she proudly affirms that she did herself.

“I didn’t even call a landscaper, because it will look too rigid and curated. It will look artificial,” she says. “I prefer a more personal touch.”

She had thought of making an extensive vlog of her green pursuits, but was dissuaded by her long-time partner, Terence Koh. Jokingly, Chua says: “Terence keeps telling me, ‘Oh please, nobody wants to watch you garden – they just wanna watch you go out and buy new handbags!’” 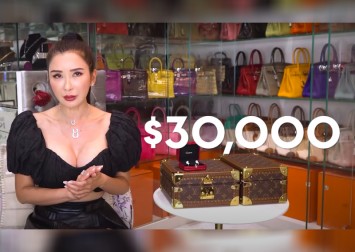 In October, Chua uploaded a vlog showing off her jewellery collection – it was in this video that she told the story of her lost Cartier earring. Internet users roundly criticised her for what seemed to be a first world problem – one that came off as especially tasteless during a worldwide pandemic.

Chua took the criticism in her stride. “It’s true – I do agree with their comments,” she says. “There are a lot more real problems than losing a Cartier earring. I’m not going to say, ‘You’re jealous because that’s my only problem’. No, I think they were right to say all that about me.”

Still, Chua understands that her usual life of opulence and designer goods might come off as boorish during a time of economic uncertainty, which is why she’s making an effort to “hold on to the normal stuff”.

Recent videos on her channel have included vlogs of her dinner parties (where she demonstrates her flower arranging skills and hostess chops) and more lighthearted ones such as her take on Uncle Roger’s comical reaction to the BBC’s disastrous and viral egg fried rice recipe.

Producing content, no matter how frivolous it might be, is never easy. Chua has a team to help her edit her videos, but she largely handles filming herself. It is also a point of pride for the mother-of-two that she has almost never deviated from her weekly uploading schedule since 2019.

Despite the glamorous world that Chua has created for herself on her YouTube channel, she doesn’t gloss over the ugly realities behind content creation.

Chua says that since she began building her social media presence in 2013, there “was not one day where [she] did not put on make-up and do a piece of content”.

“In lockdown, I was doing so many TikTok videos I swear it took over my life,” she says. “I did not take an off day for years – not until 2020.”

Eventually, her family – recognising she was wearing herself thin – staged an intervention, forcing her to take at least every Sunday off.

Like any other creative, Chua has bad days. She says she often struggles with self-doubt and uncertainty about the work she puts out, that she sometimes feels burned out by her rigorous filming schedule and the demands of having to live so much of her life online.

“Sometimes, I wake up not feeling the greatest,” she admits. “But you need to gather yourself. Start putting on your skincare – it always works for me. With just one brush of foundation I feel like I’m alive again. After I put on my foundation, I know that life is good.”