Miyako Island’s Maehama beach, which is said to be the most beautiful in the Orient.

MIYAKOJIMA, Okinawa - After arriving at Miyako Airport on Miyako Island, I got into a rental car and headed for Maehama beach - said to be the most beautiful beach in the Orient. About 20 minutes later, a contrasting landscape of a cobalt blue sea and white sand came in to view, with not a speck of seaweed in sight.

The sea's water was so pristine, it almost seemed safe enough to drink.

"It's like I'm not in Japan anymore. If there were more places to shop here, like there are in Guam, a frequent destination of mine, I would definitely come to Miyako Island [more often]," said a woman in her 30s, visiting from Tokyo with her sister and her brother-in-law.

A couple in their 40s said that they enjoyed diving and had even happened upon a sea turtle fast asleep on a rock. While they often go diving near Ishigaki Island, they said the water there was nowhere near as clear as it is at Miyako Island.

What makes the water so transparent is the fact that groundwater, that it receives in abundance due to Miyako Island being in the path of many typhoons and receiving a lot of rain, flows out to sea. Also, with there being no mountains or rivers, soil and sand don't wash out to sea.

Miyako Island saw a huge rise in the number of tourists, reaching 510,000 in fiscal 2015 and then rising to 1.14 million in fiscal 2018, mainly due to its improved infrastructure and efforts to attract more tourists.

"The opening of the Irabu Ohashi bridge in 2015 greatly contributed [to the increase in the number of tourists]," Takamori Ikema, the Miyako Island Tourism Association's executive director, said. "We urged travel agencies to visit Miyako Island, telling them, 'Just one look is truly better than a hundred words,' and also asked airlines to fly larger planes for more regular flights."

Miyako Island is one of six large and small islands that make up Miyakojima City. The 3.5-kilometre-long Irabu Ohashi bridge connects Miyako Island and Irabu Island, and is the longest toll-free bridge in the nation.

Shimojishima Airport, located on Irabu Island, was previously used for pilot training but opened as a passenger terminal in March last year.

Cruise ships carrying tourists from China and Taiwan have been arriving at Hirara Port near the centre of Miyakojima City. And in April, a mooring facility for 150,000 tonne vessels will go into service, allowing large cruise ships to berth.

Early in the morning, I made my way to the port, following a convoy of tour buses that were carrying cruise passengers. 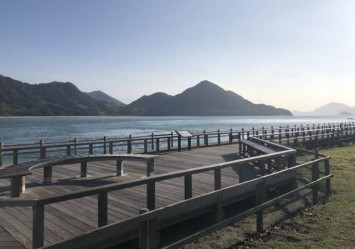 Along the way, the buses exited the highway and drove down a narrow road through a field. I thought it was a bit strange, but after a while, we arrived at Maehama beach. Chinese passengers began cheering and taking photos in the drizzling rain.

I later learned why the bus turned off the highway. One of the drivers told me, "I was told not to go past any electronics retail stores until I took them to a duty-free shop." That made sense. So, I went in the duty-free shop for myself.

There were health foods, cosmetics and home appliances all on display, but I heard that many customers only buy snacks. "We may need to lower the price of the products," the shop's Chinese manager said over the phone, as he was on a business trip to Tokyo.

Rent has been soaring on Miyako Island, which is currently experiencing a development rush. "The peak was in 2018 when there were no vacant rooms," an employee of a real estate agency stated.

"Although rents have decreased a bit, they're still double what they were four or five years ago. With cases like married couples not being able to rent a room, residents of the island are in a bit of a fix."

I saw some strange rental properties on the island - high-class shipping container houses with wooden exterior walls and marble floors. I felt that there was no end to the fascinating things on this island.

Miyako Island has the world's first large subterranean dam, with the underground water dammed up by concrete walls. A system to pump water to irrigate the fields was completed in 2000, and the farmland, which was once hit by drought, was transformed into fertile land. This mechanism is on display at the underground dam museum.

Miyako soba noodles are a type of Okinawa soba made from wheat flour instead of buckwheat flour. Established 51 years ago, Daiwa Shokudo is known as a restaurant that specialises in Miyako soba.

According to the owner, Katsuya Shimoji, pork loin and fried kamaboko are indispensable accompaniments for the noodles. He said they are usually placed under the noodles, which makes sense as many people eat the noodles first.

The soup, primarily a pork bone and bonito flake broth, has a strong impact when eaten with curry powder or Okinawa's red pepper kusu seasoning.

Yukishio, a specialty of Miyako Island, is a powdery salt that is uniquely made and is full of minerals.

At the Yukishio museum on the northern tip of Miyako Island, visitors can observe the salt factory and eat Yukishio soft-serve ice cream at a cafe in the museum. There is also a museum shop that sells Yukishio salt and sweets made with the salt.

It takes about 3 and a half hours from Haneda Airport to Miyako Airport, and slightly longer from Narita Airport to Shimojishima Airport.