The Jollibee story: How a Philippine fast food franchise took on the world

Philippine franchise Jollibee has become one of the world’s biggest fast food chains.

You only need to spend about 20 minutes in the Philippines to realise that Filipinos really love to eat.

The country has a dazzling profusion of dining outlets, in particular at the casual end of the market, but one brand is seen more than others. And it's a brand that also seems to induce warm, fuzzy feelings in more or less everyone in the country: Jollibee.

The fast food company has 1,150 outlets in the Philippines, and a bigger share of the Philippine market than its two biggest competitors combined, as well as 234 overseas outlets in 15 territories. It is the 24th largest fast food chain globally (including coffee chains) by number of branches, and fifth among companies not from the United States.

It refers to itself in promotional posters displayed in its offices in the Manila business district Ortigas Centre as the largest Asian restaurant company in the world.

This food and beverage empire was born in 1975 - and at the time served only ice cream.

It was the brainchild of company founder and chairman Tony Tan Caktiong (generally referred to by his staff as Sir Tony in a sign of respect), the third child of seven in an impoverished family who moved to the Philippines from Fujian province in China.

His father opened a small Buddhist restaurant in the southern Philippine city of Davao when Tan was a child.

Tan himself studied for a degree in chemical engineering, but aged just 22, he was inspired by a trip to an ice cream plant to spend his family's savings on the franchises for two Magnolia Dairy Ice Cream outlets, Cubao Ice Cream House in Quezon City, Metro Manila, and Quiapo Ice Cream House in central Manila.

People started asking for hot food, so he began providing hamburgers and sandwiches, and soon they were more popular than the ice cream.

The Jollibee name was introduced in 1978, first as Jolibe; it was changed to the current spelling so that it could be more easily associated with the words "jolly" and "bee" - and so that, thanks to the non-standard spelling, it could be easily trademarked.

"It compares the employees of the company to busy workers in a hive: hard working, industrious and providing the sweet things in life," says Dennis Flores, president and head of international business, EMEAA, for parent company Jollibee Foods. "And Sir Tony thought it was not enough that the employees worked hard, but they should also be enjoying their work." 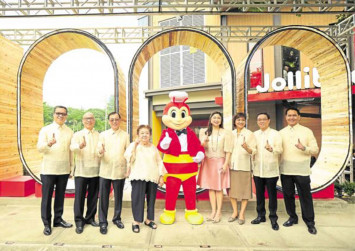 In its early years Jollibee faced perhaps the biggest challenge in its corporate history: both McDonald's and KFC entered the Philippine market in the early 1980s. Instead of having their usual effect of sweeping aside local competition, in Jollibee they found a competitor more attuned to the local market, and one with a particularly determined founder.

"As early as [owning] five stores, Sir Tony was already dreaming of being the best in the country and the world," says Flores. "He was advised to sell the business and ride on the success of the multinationals. But he believed he had knowledge of the market and great-tasting products."

The line-up of products that Jollibee is best known for today, all of them tailored to meet local tastes, were pretty much in place by the early '80s.

Its menu items include the Yumburger and the uniquely sweet Jolly Spaghetti, but the star of the show is the Chickenjoy fried chicken, introduced in 1980.

"Fried chicken is a very popular product in the Philippines," says Flores. "Chickenjoy is delicately breaded to produce a crisp, delicious feel, and there's a secret marinade."

It's also the key product in Jollibee's international expansion, because most cultures tend to appreciate it. "Chickenjoy is our number one product - the bestseller in every market in the world. It appeals to a diverse set of customers and nationalities," Flores says.

The company started offering franchise opportunities in 1979, had 10 stores by 1981 and became the local market leader in 1985. 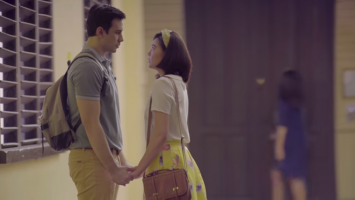 It started to expand outside the Philippines in 1987, initially in Brunei, and then in a big way from 1995, when it moved into Guam, Dubai, Kuwait and Saudi Arabia. The US followed in 1998, and the likes of Qatar, Singapore, Bahrain, Italy and the UK more recently. Its fastest period of overseas expansion, though, has been the past three years.

The company has two different strategies when moving into or expanding in a particular country, because the customer mix varies quite widely from market to market.

In the Middle East, for example, the clientele is overwhelmingly expat Filipinos; in Vietnam, by contrast, where the company has 118 outlets, more than half of its total outside the Philippines, it's almost exclusively local.

In London and Milan local custom stands at about 20 per cent, but it's rising fast. And these days it boasts a local customer base of more than 50 per cent in Hong Kong, where it has eight outlets.

Flores says the company regards Hong Kong as a particularly exciting market, and has ambitious expansion plans over the next five years.

Similarly, the level of localisation, both in the company's operations and its menu, varies from country to country. "When we enter a market, we bring the products we're famous for - the chicken, the spaghetti, the burger," he says. "Over time, we bring in local products: in Vietnam we have chilli chicken, and in Brunei nasi lemak."

Its strategy in China has been a little different from most other places, buying local brands rather than introducing its own. Jollibee bought its first overseas brand, Yonghe King in China, in 2004, and also owns chains Hong Zhuang Yuan and San Pin Wang.

It has gone down the same route in the US, buying 40 per cent of local chain Smashburger in 2015 and fully acquiring it last year.

The company is also joint owner of Highlands Coffee, with more than 300 branches in the Philippines and Vietnam, and of Pho 24 in Vietnam, the Philippines, Indonesia, Cambodia, Macau and South Korea.

The company started running TV ads as early as 1980, and in the same year it introduced what has become the focus of its marketing, its mascots - particularly the brand's instantly recognisable bee character, which appears in life-size form in its stores. It was inspired, says Flores, by the popularity of Mickey Mouse.

"Tony was trying to think of something that would represent the Jollibee brand, and the benchmark at that time was Disney."

Jollibee has been also involved in creating media content, with Jollitown, an animated children's TV series starring the company's mascots that began in 2008 and was the highest rated children's programme in the Philippines while it ran.

Children's education and health have been a focus of its charitable endeavours, along with the welfare and economic development of farmers, formalised since 2004 in the Jollibee Group Foundation.

There's a distinct family feel to Jollibee the organisation. Flores himself has worked for the company for 19 years, and he says there are many similar stories. 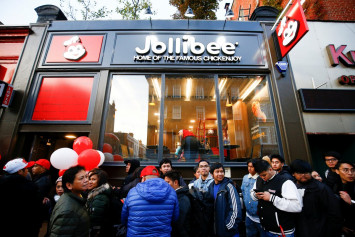 "I feel very strongly that we have a unique culture: our values are putting the customer first, speed with excellence, humility, a spirit of generosity, and integrity. These are not just words in a document framed and hung on a wall; they're values lived from the store teams to the senior management. There's a synergy and unity of purpose among a diverse set of employees."

It's also a company that many customers hold very close to their hearts, tied up with memories of home and childhood.

Flores says the reaction when he tells people he works for Jollibee is priceless.

"It's actually very heart warming to see the reactions of people when I tell them. When we opened in Saudi Arabia, it was like customers were home," Flores says.

"Filipinos are all part of Jollibee; all through their lives they've been going to Jollibee, and they feel like they have an attachment. They give you suggestions on the menu, the service. Where there's no store, people plead with us to open one. It's heart warming to have Filipinos, our core customers, love the brand."