Charlie Cameron took a bare-bones approach when it came to decorating her family’s 6,700 sq ft black-and-white rental home in Singapore.

The Singapore black-and-white is among the most culturally distinct examples of colonial architecture in Asia.

A hybrid of Malay and Indian influences developed early last century when British culture sought a home for itself in the tropics, they once accommodated magnates, magistrates and mandarins.

Perhaps an occupying Japanese army, too.

So almost five years ago, when Australian Charlie Cameron, her British husband and their two children moved into their four-bedroom, four-bathroom rental in the exclusive enclave of Ridley Park – after an arduous bidding process involving the Singapore Land Authority to secure the lease – respecting the home’s rich heritage was paramount.

While most of the bungalows in the area were built in the 1920s, this one dates from 1935, and its art deco design reflects its age: the roof is flat rather than pitched; and the doorways are square, not rounded.

But the high ceilings and generous proportions of the rooms still lend an openness and airiness that only tropical homes from this era can.

“If you’re going to live in a black-and-white, you have to do it properly,” says Cameron.

“You don’t take on this beautiful home and not do it right.”

With heritage laws prohibiting changes to the exterior of the two-storey, 6,700 sq ft (622 square metres) house, Cameron focused on the interior, bringing furniture from their previous house in Singapore and their considerably smaller flat in Pok Fu Lam, Hong Kong, where they lived for four years before moving to the Lion City. 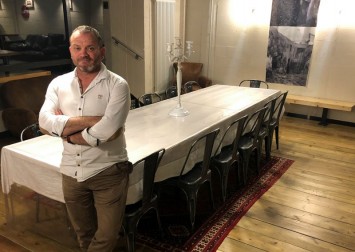 But most of it was not a good fit for the new living areas.

The modular Matthew Hilton sofas from Lane Crawford, for instance, were lost in the space.

The easy solution would have been to redecorate in the traditional trope: dark wood furniture made of teak or mahogany, with bamboo, cane and rattan elements; adorned with exotic prints, potted palms and eclectic accessories collected during world travels.

Instead, Cameron doubled down on her own pared-back, modern aesthetic, creating a juxtaposition between the interiors and the architecture that, she says, lets the bones of the building be beautiful.

“There’s something to be said for less is more,” says Cameron.

“This is a big house, and if I didn’t have the right pieces anchoring it, you’d feel like you were rattling around. But it doesn’t mean that every nook and cranny needs to be full. I think the error is in not leaving negative space. Negative space allows what you put in to shine.”

The white walls and floors help, but Cameron would have preferred pale American oak planks to the tiles on the lower level of the house.

“A completely white canvas allows for the injection of colour – as much or as little as you want,” says Cameron.

“You can add in warmth and texture without having to worry about it competing with anything.”

Cameron achieves this with an abundance of original artworks, mostly Australian.

New pieces sit on the floor, propped against walls waiting to find a hanging home. They are considered purchases. 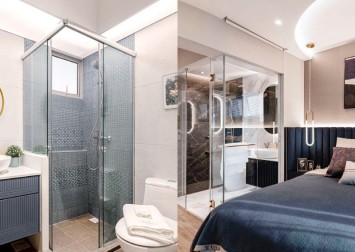 She follows the artists and the galleries, waiting for the exhibitions, ready to buy.

“I actually have a big issue with over­consumption,” says Cameron.

“I don’t like trends and the churning that follows those. But art is my absolute passion. If I buy anything at all for the house, it’s art.”

It helps define Cameron’s aesthetic, which she says has hardly varied over the years but is more honed after a career spent creating experiences.

A former event producer, she is now the owner of Lottie Lifestyle, a blog, online magazine, shop and interior styling business.

Her personal taste influences the sourcing and visual storytelling for her business, and in turn, that influences the look of her home, which often doubles as a showroom.

“If you are true to your own style, if that look resonates with you, no matter where you live you can bring that sensibility to the space that you’re in and it will always look right,” says Cameron.

Not that the entire house is picture-perfect.

Some of the smaller rooms are more utilitarian by nature, including an indoor gym and a music room upstairs, plus the office downstairs that Cameron and her husband currently share.

Another is a work-in-progress as Cameron slowly converts the space from a playroom to a teen hang-out.

“I am visual – I want to have a beautiful home,” says Cameron.

“But I also don’t want it to be the be-all and end-all. I try and just live with things and not seek any kind of idea of perfection, because I just don’t think it exists.”

Rather, she and her family are busy writing their own history in this one-of-a-kind home.

In Cameron’s favourite room of the house, the French windows have been intentionally left curtain-free so their decorative detail can be appreciated.

The Lowlife armchairs, by MCM House, hand-painted cushions, by Espanyolet, and muslin Cumulus light, by Enoki, were from Cameron’s shop, Lottie Lifestyle (lottieisloving.com).

The Robert Malherbe artwork on the left and Martine Emdur piece on the right were both from Olsen Gallery, in Australia (olsengallery.com). The Lohal rug was from Ikea (ikea.com.hk).

Cameron beside one of the many signature French doors on the ground floor of the bungalow.

Before the days of air conditioning, leaving the doors open allowed for cross-flow breezes, vital in the tropics.

Shaded by an instantly recognisable black and white bamboo blind, the outdoor living area is surrounded by lush greenery and overlooks a swimming pool.

The pendant light was from Elements Concept, Singapore (elementsconcept.com.sg).

All other products, including the coffee tables, by MCM House, came from Lottie Lifestyle.

The main entrance to the house is through a sheltering portico – handy for comings and goings in one of Singapore’s almost daily showers.

Cameron had the bench seat custom built, adding a practical element for visitors and personality to the all-white space.

The Maison de Vacances linen cushions were from Lottie Lifestyle and the Dandelion jute rug from Armadillo & Co, Australia (armadillo-co.com).

The three-part RF Alvarez artwork on the left was sourced from Uprise Art, in New York (upriseart.com) and the indigo-coloured David Hardy piece on the right was from Partnership Editions, in Britain (partnershipeditions.com).

Leading to the second level, or to the kitchen and guest bathroom, this extension of the entryway is simple and free of clutter.

Behind the Michael Muir artwork, which came from Jan Murphy Gallery, Australia (janmurphygallery.com.au), is an under-stair shoe cupboard.

The Lowlife armchair, by MCM House, Maison de Vacances cushion and baskets were all from Lottie Lifestyle.

The George Nelson Bubble lamp was from Manks, in Hong Kong (manks.com).

The workhorse of the house, the dining room is the space most used by far, says Cameron.

The Moooi table, from Space Furniture, in Singapore (spacefurniture.com.sg) is used for breakfast, lunch and dinner; entertaining (in non-Covid-19 times); packing shop orders; and as a flower table for when she returns from the market.

The Thonet No. 18 dining chairs were bought in Australia (thonet.com.au) and the white cabinet, from G.O.D. (god.com.hk), moved with the family from Hong Kong.

The addition of the Bell pendant lights, by Normann Copenhagen, from Finnish Design Shop (finnishdesignshop.com), was one of the first changes made in the house, replacing the harsh overhead spotlights left by the previous tenants.

The River weave rug was from Armadillo & Co. Above the white cabinet is an artwork by Julian Meagher from Australia’s Edwina Corlette Gallery (edwinacorlette.com).

The solid oak bench seat and Cuzzi II lamp, both by MCM House, and velvet Penny Round cushions and Pretzel tea towel wall art, both by Castle, all came from Lottie Lifestyle.

The bungalow, built in 1935, is one of just two newer art deco-style black-and-whites in the area.

The bed and side table were from Piccolo House, in Singapore (piccolo-house.com) and the lamp was from Ikea.

Providing tranquil repose in the bedroom, the Croisette armchair, by Honoré Deco, vintage Moroccan rug, by Nouvelle Nomad, and J’Jute basket, all from Lottie Lifestyle, are offset by art from Block Shop Textiles, in the United States (blockshoptextiles.com).

As is typical in black-and-whites, the upstairs flooring is polished timber boards while the downstairs is tiled, to protect from termites and flooding and to keep the space cool.

Join the rugs to avoid the cost of a custom-made floor covering in the expansive upstairs living room, Charlie Cameron joined together two Ikea Lohals natural, flat woven rugs to create the illusion of one larger rug.

As the jute fibres on the Lohals are simply turned over, and not finished with stitching at the edges, two could be pushed together almost seamlessly.

They were also used in both children’s bedrooms – Cameron trimming the rugs with scissors for a wall-to-wall fit.