'Like a medieval mirage': Seeing ancient capitals on a Thai train trip

Built in the Neo-Renaissance style, Bangkok's Hua Lamphong railway station is a rare architectural beauty. The 106-year-old terminus was due to close last winter but rumours of its demise appear to have been greatly exaggerated, as Mark Twain might have put it.

Six months after the shutters were supposed to come down, Hua Lamphong remains open, an outpouring of nostalgic remonstrations online having provoked a rethink by Thai authorities. And it's hard to think of a more fitting point of departure for a journey through Thailand's history along the Northern Line than this splendid old station.

As commuters stand for the 8am daily broadcast of the national anthem, I sip a coffee on the second-floor balcony. When the music's over, I hurry to the platform to get seated on the 75 Express.

A third-class ticket buys me only ceiling fans to help ward off the bugs and tropical heat. Yet there are advantages to travelling on the cheap, including the mixture of aromas and sounds that floods the open carriage.

Outside, Bangkok reels by in all its eclectic glory. Slums stand a stone's throw from grand official buildings, gilded high-rise blocks and, eventually, Bang Sue Grand Station, the behemoth built to supplant Hua Lamphong as the Thai capital's main station.

In little under an hour, we have swapped the city for the kind of swampy wetlands the modern Thai capital has concreted over (and which it is sinking into at a rate of 2cm to 3cm [0.8in to 1.2in] a year). This marshy landscape separates Bangkok from its predecessor, Ayutthaya, the centre of an eponymous Siamese empire that flourished for 417 years, until it was brought down by besieging Burmese forces in 1767.

After centuries of neglect, Ayutthaya has been rebuilt in the mould of a provincial Thai city. But the relics of past greatness are not hard to find.

Tuk-tuks are lined up outside the station, all jostling for business. I climb into one called Nemo, which is decorated with a marine motif, and ask to be taken to Ayutthaya Island, where the bulk of the city's heritage sites are located.

Nemo whizzes off into anarchic traffic and it's from the rear of this three-wheeled rust bucket that I catch my first glimpse of one of Ayutthaya's 40-plus major monuments when we round Wat Sam Pluem, a bell-shaped chedi (or stupa) in the middle of a roundabout.

Ayutthaya Island, ringed by the area's three rivers, was a strategic piece of real estate that became the beating heart of a vast trading empire. Today, it is home to the Ayutthaya Historical Park, which William Chapman describes in Ancient Sites of Southeast Asia (2018) as "a combination of preserved ruins, remnants of the more recent city, and managed parklands".

He might have added that it is also an oasis of avian life and tropical plants.

A shot of Wat Phra Ram - built in the 14th century by King Ramesuan and centred on an imposing prang (a tower-like spire) - becomes my quintessential Ayutthaya photograph. But it's while walking around nearby Wat Phra Si Sanphet that I develop a more visceral sense of place.

Founded in the 15th century by King Borommatrailokanat, this is one of the most revered sites in the city, not least for the three towering chedi that give it a cathedral-like majesty.

The paths linking the stony ruins together are imbued with a graveyard chill, lined by Buddha effigies that were beheaded or broken like corpses during the carnage that engulfed this city 250 years ago.

Another potent image of death and rebirth stands at the other end of the park, in Wat Phra Mahathat, one of the largest sites in Ayutthaya. Selfie-stick-wielding sightseers are crowding around a banyan tree, where the head of a fallen Buddha caught in the tangle of its roots has drawn their attention.

This image of natural reclamation is writ large in the Lord of Light's bark-framed gaze, just as it is in the moss lining the temple brickwork and the branches that sprout from the chedi like green hair.

The ruins of Ayutthaya evoke a childhood memory of the 1967 Disney adaptation of The Jungle Book , and the scene in which Mowgli meets the orangutan King Louie in his primate court. And 50km (30 miles) further along the railway tracks, fiction morphs into reality.

Visible from the train, Lopburi's Prang Sam Yot is a charcoal-coloured sandstone temple composed of three linked towers. But it's a challenge to fully appreciate the decorative features of this ancient masterwork as it has been overrun by monkeys, which swing from the rafters like a cast performing I Wan'na be Like You .

These mischievous creatures have earned Lopburi the nickname Monkey City, yet they're a distraction from the historical wonders, which, while not as numerous as those in Ayutthaya, allude to an earlier epoch.

As the Tourism Authority of Thailand's website explains, Prang Sam Yot was a "Hindu shrine built in the 13th century in the classic Bayon style of Khmer architecture".

Before being absorbed by Ayutthaya, Lopburi, or Lavo as it was known, had been a vassal of the Khmer empire, one of the spinning "mandala kingdoms", as historian OW Wolters describes the ever shifting centres of power that defined mainland Southeast Asia.

Anyone who has visited Cambodia's Angkor Wat will notice similarities in the Hindu architecture scattered either side of Lopburi's railway tracks, even if temples such as Prang Sam Yot have since been reoriented towards Buddhism.

I walk off lunch in Wat Phra Si Rattana Mahathat, a large complex of 12th and 13th century Khmer prang in well-manicured grounds so close to Lopburi Railway Station it could serve as an additional waiting area. But when the northbound Rapid Train 109 rolls into town, I end my brief dalliance with Thailand's Khmer heritage for the next leg of my whistle-stop journey.

Sukhothai is around 300km northwest of Lopburi. Its Sanskrit name translates as "Dawn of happiness" and daybreak here is a spectacle not to be missed. Having arrived after nightfall, I've splashed out on an 800 baht (S$30) fan room at the Vitoon Guesthouse, which has a front-row seat for the morning duet of nature and architecture, as it is directly across the street from the main gate of the Sukhothai Historical Park.

A backwater by contemporary standards, the ancient walled city of Sukhothai is, like Ayutthaya, festooned with archaeological sites.

Like Lopburi, Sukhothai came to prominence as a Khmer tribute state. But by the mid 13th century, it had thrown off outside influences and begun to spread its control over a large part of Thailand, which is why it shares a mythic space with Ayutthaya in the national consciousness as being foundational to modern "Thainess".

About a third of Sukhothai's key monuments have been grouped into an easy-to-navigate park intersected by jade-coloured waterways and tree-shaded pathways, which I pedal around on a sit-up-and-beg bicycle.

The most significant structure in the park is Wat Mahathat, which hove into view like a medieval mirage. The crumbling complex "dates back to the origins of the city under Si Intharathit (reigned: 1238-1270)", according to the relevant literature, and at its zenith "had over two hundred chedi" as well as shrine halls, meditation rooms and manuscript stores.

Now only skeleton structures remain. But climbing onto an elevated passageway and walking between rows of pillars leading to a statue of the Buddha in earth-touching pose, I sense the past reverberating through the masonry.

I pedal and sweat the morning away on a circuit that takes me through the park and beyond, to the Buddha-topped hillside of Wat Saphan Hin, before looping back into town. Satisfied I've seen the bulk of Sukhothai's heritage sites, I take a shuttle bus from outside the Vitoon Guesthouse back to the bus station, and from there to Phitsanulok and the nearest railway station.

The most dazzling stretch of railway is reserved for the final, seven-and-a-half-hour leg of the journey, as the train rises from the rice fields that blanket Thailand's central plain and snakes into the forest-quilted highlands and to the terminus of the Northern Line in Chiang Mai.

Founded seven centuries ago as the "new" capital of the Lanna Kingdom - a state that was largely distinct from Thailand until the 20th century - Chiang Mai is, today, a cosmopolitan city known for its food, night markets and temperate climate.

Most of its historical temples are housed within the 1.5 sq km of crumbling walls that envelop the old city. But across the Ping River can be found the little-advertised vestiges of Wiang Kum Kam, the capital of King Mengrai the Great, who reigned over the Lanna kingdom from 1292 to 1311. 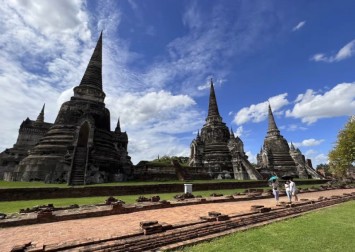 Windows and doors are typically smaller than in the south, to keep in the warmth in the cool winter months.

The Lanna wats of Wiang Kum Kam are scattered amid farmhouses and best explored by scooter. After taking in a dozen or so sites, I rest on the grass between the isolated ruins of Wat E-Kang and Wat Nan Chang. Dating back four centuries, these are not the oldest ruins in the area, but they are arguably the most evocative.

The former was named after the langur monkeys that lived there before excavation and consists of a main axis leading to a bulbous chedi. The latter is in a ruinous state. "This ancient monument is evidence of the flood […]" reads a tourist sign, detailing Wiang Kum Kam's chief weakness, its vulnerability to flooding, which saw the capital abandoned.

Given the struggle farmers are having against increasingly erratic weather patterns brought on by climate breakdown, the ruins that dot the Northern Line like medieval milestones assume a special resonance. I imagine sightseers of the future as they walk through Bangkok, 750km south down the tracks, contemplating the ruins of our time.

Then a black-crowned heron lands and starts feeding in one of the small streams that brings water from the Ping to the farms of Wiang Kum Kam. It is a truly beautiful sight.