Melaka durian 'The Rock' to get name change; aims to be more famous than Mao Shan Wang

MELAKA - Melaka is cultivating its own durian clone with one aim in mind - to make its fruit even more famous than the reigning Musang King.

The current name for Melaka's durian is Five Fingers - The Rock.

"We have proposed to rename the clone by honouring Melaka founder, " he said in an interview.

Norhizam said the new durian species was now being cultivated at Asahan in Jasin.

"Asahan is a rural area that was once linked to the Melaka Sultanate, so it is inappropriate to have an Orang Putih (Caucasian) name for a locally grown fruit.

"We prefer a name change to Durian Parameswara, " he said.

Norhizam said the original name came about as one needs to use five fingers to remove the succulent flesh from the husk. 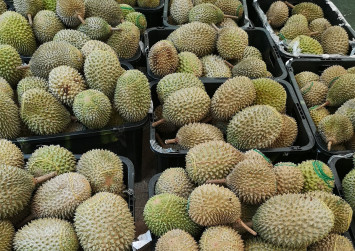 "It because of the five fingers - Dwayne Douglas Johnson - got the credit, " he said in jest, referring to the American actor.

He added that the original clone was technically known as D159 and was being farmed at a 5.2ha site.

"We are also looking at other clones and would name them after several historical figures of Melaka, " he said, adding that the state government had also given priority to local farmers to cultivate species like Tracka, Kim Hong, Black Thorn, Udang Merah, XXO, D101, D24, D13 and Mas Johor.

He said durian was the most profit-making crop and Melaka would capitalise on China's demand for the King of Fruits.

"We are in the midst of devising a mechanism to improve logistical network to market the fruit overseas.

"Even the local demand for Melaka's durian kampung and D24 have increased significantly, " he said.

In addition, Norhizam said Melaka would double its effort to promote durian by-products such as mooncakes, frozen pizza, bubble tea and coffee to foreign markets.