A Miss Longan contest? Thai town celebrates the fruit like nowhere else

Traditional dancers at the Lamphun Longan Festival in Lamphun, Thailand. This year the festival runs from Aug 5 to 14.

If you have ever eaten longans, you'll know how easily the skin peels away and how readily the sweet and succulent flesh slips off the shiny seed.

In Thailand, the tiny town of Lamphun (pronounced "lam-poon"), just south of Chiang Mai, is the epicentre of longan fever during July and August, when the fruit is in season.

The fever reaches its height during the Lamphun Longan Festival, which this year runs from Aug 5 to 14, when activities such as a longan-eating race, a fancy-dress competition and a Miss Longan contest keep onlookers amused.

The festival usually kicks off with a parade of floats smothered in longans that makes its way through the town centre, but that has been suspended this year, due to ongoing concerns about Covid-19.

For many attendees, though, the most important business of the festival is the judging of the fruit itself, which takes place on the afternoon of the first day.

To be awarded a rosette in any category is deemed an honourable achievement. Naturally, to make objective decisions, the judges need to consume vast quantities of the fruit in question.

The word longan comes from a Cantonese word meaning "dragon's eyes", and if you cut a fruit in half, you'll see that the seed resembles a pupil and the pulp looks like the white of an eye. Longans come from the same family as lychees and rambutans, and are packed with vitamin C and riboflavin.

As with all tropical fruits, there are many varieties of longans. Two of the most popular in northern Thailand are biew kiew , which has a thicker skin than other varieties, and chompoo ("pink"), which, as the name suggests, produces a fruit with a pale pink tinge to the flesh. The chompoo longan is much sought after for its sweet taste and delicate scent.

Although the leaves of the longan are nondescript, the tree itself has a peculiar characteristic. Its trunk branches out from very low down, giving it a low centre of gravity, so as the fruit matures in huge clusters, farmers must prop up the boughs with Y-shaped supports to prevent them from collapsing.

Longans are also canned or dried for export, and there's even a "longan elixir", called P80, which, its maker claims, induces deep sleep. But for Thais, nothing beats sitting on a mat around clusters of fresh longans and munching on the luscious fruit while chatting.

In Lamphun, they go a step further, by adding longans to noodle soups, stir fries, curries and ice cream.

Lamphun dates back to the seventh century and the town retains its original shape, with its walls and moat in the form of a conch shell.

Queen Chamadevi established Lamphun as the capital of the Haripunchai Kingdom (629-1292) and her statue, often surrounded by floral offerings, is visited by a steady stream of devout locals at a shrine dedicated to her in the southwest corner of the town.

Part of the fun of visiting Lamphun is the 25km (16-mile) journey to get there, along Highway 106, south from Chiang Mai. This narrow, winding road is bordered for most of its length by towering yang na trees, which are encircled by saffron robes, giving a sense of ceremony to the approach. Thais believe that nobody would dare cut down a tree ringed by this holy cloth, so they often "ordain" trees for their protection.

Before arriving in the town centre, it's worth branching off to the left from the main road towards Ku Chang Ku Ma, one of Lamphun's quirkiest sights: two brick stupas dedicated to Queen Chamadevi's favourite elephant, which supposedly had green tusks, and her son's horse. A multitude of tiny ceramic elephants and horses adorn the site.

Once the main road has passed over the moat and between the brick battlements of the town's walls, the quiet streets of Lamphun are lined with wooden houses and temples.

A model of the town at the Lamphun National Museum shows how it was built around the highly revered Wat Haripunchai, considered one of the most beautiful temples in Thailand.

The centrepiece of the temple, which is directly opposite the museum, is a slender, golden stupa about 50 metres (165 feet) high that was used as the model for the better-known temple on Doi Suthep, Chiang Mai's guardian mountain. Devoted Buddhists walk barefoot around the stupa, clutching offerings and muttering prayers, all day long. 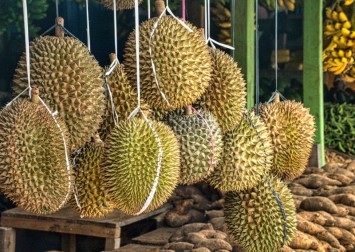 The temple compound includes a bright red bell tower containing an enormous gong that is thought to be the largest of its type in the world; a scripture library raised on a high platform; and the Suwanna Chedi, a 15th-century, stepped brick stupa with Buddha images set in niches.

Wat Haripunchai's main entrance faces east, towards the Khuang River, and an electric bus waits there to ferry tourists around the town's major sights.

These include Wat Chamadevi (aka Wat Ku Kut), with two ancient stupas that are the only remaining examples of Haripunchai architecture; and Wat Mahawan, which contains a highly regarded Buddha image called Phra Rod Luang and fearsome nagas guarding the entrance.

A covered bridge over the river in front of Wat Haripunchai houses a handicrafts market, where samples of locally woven cloth in subtle shades are on sale, while along the riverside, grilled snacks on sticks with spicy dips are sold from stalls.

About 50 metres beyond the bridge on the far side stands the unpretentious Lamphun Longan Noodle Shop, where a throng of locals can usually be found enjoying a bowl of noodles doused in a tasty broth of pork and longans, washed down with - what else? - a refreshing glass of longan juice.