Real life: 'The hardest part about getting breast cancer was terminating my pregnancy'

The year 2018 was a challenging one for Christina.

She had just discovered she was pregnant with what would have been her fourth child but, at around the same time, she also felt a lump in her left breast.

"I initially thought it was a clogged milk duct because I had just weaned my youngest daughter off breastfeeding, but massages and warm compresses didn't make a difference and it hurt a lot when my daughter accidentally kicked me in the chest as I was baby-wearing her," Christina shares.

"A detailed ultrasound was inconclusive so my gynaecologist advised me to do minor surgery, using local anaesthetic, to test out the lump tissue. I was pregnant at the time so I wanted to rule out anything scary and decided to go ahead with the surgery."

The results came back less than a week later revealing that Christina had Stage 0 to 1 breast cancer, which while in its early stages, was made up of very aggressive cancer cells.

"The hardest part of being diagnosed with breast cancer was terminating my pregnancy, which was about 10 weeks along at that point.

The doctor said the embryo might not progress because the yolk sac did look larger than normal, but it was still difficult to go through.

"So I had my second surgery, when they removed my baby and the breast lump at the same time. In a way, I think my pregnancy saved my life because if I wasn't pregnant at the time, I wouldn't have done any further tests on my lump and would have left it as it was." 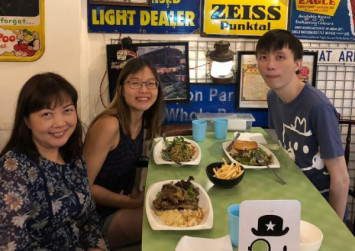 "My breast cancer journey has been a life experience that has led me to where I am today and it's part of my story even though it's been a struggle," she says.

"Now I want to use my business to fulfil the needs of new mummies, as well as use it as a platform to provide a wider social impact along the way through charity work, volunteering and sharing my story with other women."

Worried about your risk of getting breast cancer?

While nothing can prevent cancer from attacking the the body, early diagnosis is key to nipping the disease in the bud and improving your survival rate.

Learn how to self-examine your breasts at home to detect any lumps or changes with our inforgraphic below:

If you're having a mammogram for the first time, it'll be free! Find out more here.

ALSO READ: It was so tough I wanted to jump: Her life changed forever when both mum and dad were diagnosed with cancer

This article was first published in Women's Weekly.