Robot butlers, smart beds: The hotel of the future is taking shape today

Bed XYZ, one of the concepts in the Hotel of Tomorrow project, features engineered fabrics that control the temperature of the bed and filter air pollutants.

Imagine a hotel where your bed monitors your sleeping patterns and adjusts the environment to provide the ultimate night’s sleep.

Or where your guest room is on wheels: a driverless RV fitted out by your favourite hotel chain to traverse the great outdoors, stopping at partner hotels along your route for housekeeping and dips in the hotel pool. Need more towels? Your robotic butler will be right there.

These ideas may sound fantastical, but the technology to develop them is already here and it’s set to transform hotels and the way we use them after the coronavirus pandemic.

So says US design and development firm The Gettys Group’s chief innovation officer, Ron Swidler, and the 1,000 hotel executives and 70,000 travellers who evaluated the findings of the group’s global think tank, Hotel of Tomorrow.

“We’re not inventing all-new technologies,” says Swidler. “They exist in other forms. We’re just trying to apply them to the hospitality industry and think of ways that would enhance a future guest experience.”

Swidler, who is based in Chicago, will discuss the project on June 23 in a Global Conversation on Hospitality  panel that is part of Hong Kong’s Knowledge of Design Week (KODW).

He’ll appear in the hybrid event alongside Thailand-based Keith Yates, an adviser to luxury hotels and airlines on service and sustainability, and Hong Kong designer Joyce Wang , known for her work on The Landmark Mandarin Oriental Hong Kong and restaurants Rhoda, Mott 32 and Ammo. Also part of the event is Indonesian hotel founder Adrian Zecha, of Aman Resorts fame.

“The industry has felt more than its fair share of shock as a result of the pandemic,” says Swidler. “It’s been a challenge. But it’s also created opportunity for reinvention.”

It was the impetus for Gettys’ relaunch last year of its Hotel of Tomorrow project, which ran originally from 2004-2006. This time around, 300 developers, designers, owners and operators – including Four Seasons Hotels and Resorts, Intercontinental Hotels Group, Hilton and Marriott International – joined forces to envisage the hotel of the future, focusing on the challenges facing the industry in light of Covid-19 .

More than simple offerings of hand sanitiser and Plexiglas quick fixes, the ideas (mainly technology-led) aim to benefit the hospitality industry and address anxious guests’ concerns, according to Swidler.

Some of the concepts incubated by participants early in the process are already in use in the market, including online tools to reserve a specific guest room in a hotel. “It sounds like that should be easy because you can reserve a seat on a plane,” says Swidler, who is spearheading the project. “But there are more differences in hotel rooms than you might first think.”

Hilton Honors members can now remotely select their rooms from a digital floor plan across its 11 brands in the United States. The service should be available worldwide by the end of the year.

Hilton was an early user of the contactless technology slowly gaining acceptance before Covid-19 hit. Its digital key allows guests to check in, and access their rooms, via an app downloaded on their smartphone. Swidler says that technology has since had a huge upsurge in adoption.

Other ideas were whittled down to a handful, based on their viability, feasibility and desirability. The mock-ups of these proposals may look futuristic at first, but Swidler says human-centred design is at their core, meaning solutions are arrived at to take care of our needs.

Take Bed XYZ, the most popular concept of the five; perhaps because everyone appreciates good sleep. It features engineered fabrics that control the temperature of the bed and filter air pollutants. A smartphone app allows guests to control humidity and light levels in the room, block out background noise and even regulate mattress firmness.

Or Journey Pebble: A digital, encrypted wearable that shares a guest’s preferences with the hotel, although those may change with each visit.

Or Outside In, Inside Out, which aims to bring indoors the calming and healing properties of the outdoors, by focusing on lighting, scent, sound and air quality and an abundance of plant life. 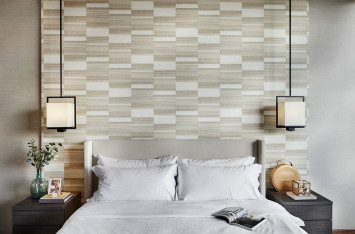 Or Robot Alliance, whose multilingual robots allows guests to drink or dine outside the hotel’s restaurants or bars.

With social distancing rules curbing numbers of people allowed in designated venues, these robots make the most of kitchens still operating at 100 per cent capacity, and can deliver temperature-controlled meals and drinks to guests anywhere in the hotel, while alleviating any anxiety that human contact may arouse.

Similarly, Hotel Rover, the autonomous adventure vehicle that can sleep four people, reduces the chance of any human contact at all, by providing mobile hospitality on the road.

With almost 80 per cent of the travellers who tested these concepts saying they would choose a hotel with these features over another, and more than half saying they would pay a premium for them, dreaming of the hotel of the future looks set to become a thing of the past.

“Covid-19 affected us in lots of different ways,” says Swidler. Not only hotel performance, but the expectations of hospitality. The industry has done an incredible job of surviving, of extending their hearts. We’ll get through this.”

The Global Conversation on Hospitality , on June 23, is part of Knowledge of Design Week, which takes place June 21-25. Key sessions of live panel discussions covering topics across health care, smart living, ageing well, and hospitality will be broadcast on ViuTV Channel 96.