Run, walk, repeat: The simple plan millions have used to start exercising, and lose weight, and my experience of C25K

New Year's resolutions are usually made to be broken, but this plan that aims to turn you from a couch potato to a lifelong runner might just be the best gift to yourself this holiday season.

After abandoning swimming and badminton - which had been part of my weekly routine for years - I was desperate to find an exercise plan to ease me back into an active lifestyle after a couple of relatively sedentary years.

I discovered the "Couch to 5K" (C25K for short), a nine-week running plan used by millions of people around the world.

The aim is to do as its name suggests - to get anyone off the couch, onto the streets or trails, and running five kilometres (3.1 miles) nonstop, in a little more than two months.

C25K runners don their running shoes three days a week, with a rest day in between. Each week builds on progress from the previous one, but always starts with a five-minute warm-up walk.

Alternating between short runs and brisk walks for about 20 minutes carries on until the third day of week five, when runners are asked to run 20 minutes without stopping.

Later weeks incrementally lengthen the run, until the runner can finish a 30-minute run without stopping by week nine. At this stage, the runner can typically run 5km.

Like many C25Kers, my plan was frequently interrupted, so it took me six months to reach the 5km goal. I was running a little over 8km regularly before a devastating shin injury dashed my long-distance dreams.

While C25K has helped runners to literally go the extra mile, many also follow it to improve their mental health.

After a break-up, Ken Wilson from Portland in the US state of Oregon spent much of the past year battling suicidal thoughts. He was diagnosed with depression.

A weightlifter for 20 years, Wilson had lost 46kg over the course of six years, but still weighed 125kg. Turning to online photos of body transformations for motivation, he came across photos of a man who had had a physique like his.

Wilson reached out to the man and asked him how he had done it. The secret was simple: to keep lifting weights, but to run, too - just like he had done on the C25K plan.

Wilson decided to take up the C25K plan anyway - and he's now nearly two months into the running plan and down 6kg.

It hadn't been easy, though, and Wilson said it felt like he was going to die on his first day. "It was the type of difficulty that felt like I could improve, I could get better. I would not give up. Day two was a breeze. It was like my body remembered how to run."

C25K was created by Josh Clark, a UX designer from New York, in 1996. The plan was inspired by his early running days, which started with trying to get over a break-up.

"I think I wanted to punish myself a little. I wasn't doing this from a happy or confident place," Clark said. "So I laced up my shoes and raced out into my neighbourhood."

He said he ran nearly half a kilometre before, bent over and gasping for air, he had to stop. He walked for a while before running again, and walking again when he was spent.

His first taste of running had resulted in sore legs and aching shins, but Clark decided to keep on running.

"I discovered that where there used to be boredom and pain, my runs were defined by a kind of meditative calm and even creative sparks," he said. "Somehow, somewhere, this painful, boring activity became something … enjoyable. I didn't see that coming."

Clark's mother became the first C25K runner, after he urged her to become more active as she approached her 50th birthday.

Though initially sceptical, she followed the plan through to her first full 5km. Millions of others have since followed in her footsteps, as Facebook users spread the word about C25K.

The running plan has spawned dozens of apps with virtual coaches that guide runners with encouragement and tips.

Even the National Health Service in Britain recommends the running plan on its website, and has free downloadable podcasts to guide listeners through the plan, step-by-step.

The early weeks of the running plan measure training by time, not distance.

Runners are free to set their own pace, but most recommend jogging at a conversational pace - one that lets you chat without losing your breath. Clark said he designed the running plan to give runners the permission to go slow.

Wilson said running has helped him cope with his illness and has helped boost his self-image. "I'm just consistently in a better mood," he said. "People are more likely to engage me and remain positive - and as a retail worker during the Christmas season, I need all the positivity I can get."

When I started the first week of C25K, I was overwhelmed with anxiety - the idea that other runners in the park might judge me for how slowly I run and how I would stop after only 60 seconds of jogging nearly kept me from running at all.

Once I had overcome this, I had to resist the temptation to try to outpace the other runners.

This mentality can cause new runners to over-exercise: they push themselves to run faster and farther, but often end up debilitated for weeks with injuries from poor running posture, bad running shoes or not properly warming up.

Read Also
Even a little running might help you live longer 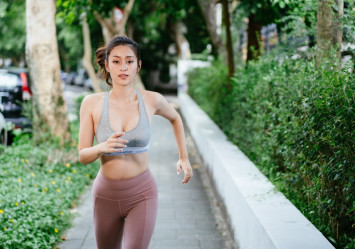 "If you do too much, too soon, too fast … you are going to risk injury and you don't progress at all if you're injured," said Wilson, adding that C25K is about endurance and stamina.

Running plans such as C25K are only guides to get you up and running; they do not tell new runners if sore shins, like mine, are just the result of muscle fatigue or something more serious - such as microfractures that might need surgery.

That's where online runner communities can help. The C25K community on Reddit, which has nearly 100,000 members, is plastered with smiling selfies and GPS tracks of runners who have recently reached their personal milestones.

Runners from around the world exchange encouragement, share new-found techniques and vent their frustrations about the cramp that stopped them from finishing a run.

Building support communities around the plan is what caused C25K to expand on a global scale, Clark said.

"C25K veterans were there to support and encourage people throughout," he said, adding that he gets notes from many who said C25K gave them confidence to apply for a new job, get back to school and start dating again.

Having put my running on pause for a year, to let my shins recover and focus on studies, I am now taking up the C25K plan a second time, advancing slowly.

Doing the programme now on a treadmill to avoid icy pavements in the below-zero temperatures in Portland, Wilson said his goal is to keep going.

"If a depressed 33-year-old with bad knees who hates cardio can do it, enjoy it, and start to thrive, anyone can."