Consumers have long fallen into the "pink for girls", "blue for boys" trap, and it can start young, from the shade of a newborn's nursery to the colour of children's clothes and toys.

It also seeps into adulthood - think pink razors, laptops and cars - as brands push the belief that people buy products based on their gender.

Companies have even convinced women to fork out more for almost identical items marketed towards men. It's called a "Pink Tax" as this is the colour of products directly marketed to females.

How could we forget Bic's "For Her" pens, pastel-coloured pens "designed to fit comfortably into a woman's hand"?

Its design flaw, however, was that they cost more than the regular pens, and they were famously ridiculed by comedian Ellen DeGeneres on her talk show.

It's just as evil as taxing tampons as these and other feminine hygiene products are subject to value-added tax.

Fiona Nott, chief executive of The Women's Foundation Hong Kong, says marketers all too often play to outdated portrayals of gender that reinforce unhealthy perceptions, subtly programming people to feel they have to behave or look a certain way.

"They persuade us that we have to buy this product to be adequate," says Nott, adding that the products themselves aren't an issue, but rather the unrealistic definition of gender that they perpetuate.

They want brands to adopt a more gender-neutral approach, to lean less on stereotypes and be inclusive towards people of all gender identities.

Some companies are embracing a non-binary approach.

Fashion shows have long been supporting the gender-fluid movement, so much so that last year the Council of Fashion Designers of America (CFDA) even created a "unisex/non-binary" category for the New York Fashion Week calendar.

Big brands are also on-board, no bigger and better than a skirt-wearing Jaden Smith who was made the face of Louis Vuitton's SS16 womenswear campaign - the same year CoverGirl took the progressive step of appointing social media sensation James Charles as the brand's first male ambassador. 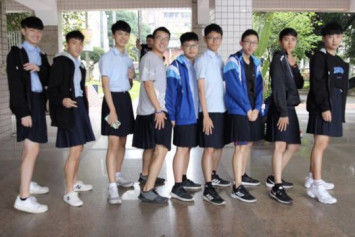 But despite a shift, some consumers continue to purchase gendered products, even though they are criticised for stereotyping the roles of men and women.

Recent research published in the Journal of Business Research came to some interesting conclusions as to why.

It found that men and women who own gendered products believed they had more sex appeal, as well as nicer bodies, than their gender-atypical competition.

The findings suggest that consumers may strategically purchase gendered products to increase their physical attractiveness and overall desirability.

"Gendered products act as flashy signals towards the opposite sex. They exaggerate signals of femininity or masculinity and influence the way the opposite sex perceives the physical appearance of their owners," says the study's co-author, Sylvie Borau, professor in ethical marketing at France's TBS Business School.

"Because typical female or male characteristics play a key role in physical attractiveness, consumers - either consciously or not - use gendered products that are inspired by sex-typical characteristics to allow others to quickly assess their level of desirability.

"Men and women can artificially increase their level of physical attractiveness by surrounding themselves with gendered products, sending stronger signals of femininity or masculinity to the opposite sex."