In this space-efficient Clementi HDB home, no room goes to waste

After living in her HDB flat at Clementi Street for 12 years and counting, Gina finally felt that it was time for a thorough makeover - and the reason for the renovation was partly due to wear and tear.

"To be honest, things were falling apart," confesses the homeowner who shares her home with her husband, two children, father-in-law, and domestic helper.

"But more than anything else, I really wanted my daughters to have their own space. They are 4 and 9 years old now, but as they grow up, I think they will need some privacy."

Eventually, this decision led to a meeting with local interior design firm Voila, and later, a top-to-toe update, which saw the entire 5-room flat upgraded with efficient layout tweaks and storage solutions.

To find out about how these changes led to a more conducive living environment for her loved ones, we sat down with Gina to chat about her renovation!

Gina (G): Initially, before we thought about renovating the house, we were actually considering moving out, so we started looking at condominium projects and things like that, even though we finally decided to continue living in Clementi.

Because of that, my husband and I realised that we both really like marble textures, and that they had to be part of the new look.

Frankly, there's no specific theme to our home - it's just cosy - but when people ask, I would jokingly tell them that it's 'Gina and Yong Lin's' style! [laughs]

ABOUT THE HOME'S NEW LOOK

G: When we first purchased the house from the original owner, the balcony was already leveled up and was part of the living room. My husband would also keep his exercise equipment there, and because of that we rarely spent time in that area, which made the nice view outside a bit of a waste.

So, with this renovation, we decided to take the plunge to remove the windows and grilles at the balcony.

At first, I was concerned about the rain entering from the balcony, but Jason, our designer from Voila, convinced us that it wouldn't be a problem by installing roller blinds and opening up the floor trap, which the previous owner had boxed up.

Other than marble, brick is another one of our favourite materials.

I've seen homes that feature white brick before, but not red brick, and it wasn't until I saw Jason's home that I was convinced to use it for our feature wall.

I think the brick wall turned out great - it really adds to the cosiness of the living room, along with the warm lights.

I'm honestly really happy with the dining area and how it has changed. Originally, there was a big mirror there, and my guests would comment on how it made the space looked large, but I didn't really feel the same way because it was just an illusion.

And even though there's now an island and dry kitchen, the entire dining area feels bigger and flows better for some reason.

I really like the island because it allows me to continue chatting with my guests even while preparing snacks and beverages; I also enjoy cutting and preparing dry ingredients there because it looks towards the balcony.

The next place I would like to mention is the new entrance to the wet kitchen, and it’s one of the main changes of the renovation.

Before that, the door wasn’t facing the living area; it was actually at the side because of a L-shaped wall, which was hacked away and is no longer there.

Although we re-oriented the entrance mainly for convenience, it also made the wet kitchen windier – that was an unexpected benefit!

I used to have a small fan in the kitchen, but I no longer need it because there’s a constant breeze from the balcony.

Other than the kitchen, the room with the biggest change in layout is definitely the master bedroom.

Before the renovation, the bedroom was occupied by our daughters and us while my father-in-law and helper had their own rooms; it could get inconvenient because we were sharing the master bathroom and we didn't have storage space for our elder daughter's mattress.

So, when Jason came up with the new design for the master bedroom, we were definitely very excited.

By tearing down the existing storeroom next to the master bedroom and building a new one at the front entrance, he created enough space for a privacy wall and also a walk-in wardrobe that lets us compartmentalise everything neatly.

Another benefit of reorganising the master bedroom's layout is that we got enough space to shift the en suite's vanity out to create a larger shower area.

The hubby and I really love the new look of the en suite, especially the contrast between the black herringbone wall and brown marble-look floor tiles; it really brings out a posh hotel vibe!

The high platform bed for the children's bedroom was our idea.

I really wanted a way to store their soft toys and books as well as our helper's mattress neatly, so my request to Jason was to have a storage space with sufficient depth in the bedroom.

The bedroom's wardrobe is a new addition as well, and to make it less plain, Jason added a herringbone pattern on the front; there are also customised drawers inside that make it really easy for me to sort and retrieve my daughters' clothes.

ABOUT WORKING WITH VOILA

G: Frankly speaking, our working relationship with Jason and Voila is great as we went from client-and-designer to becoming friends. I also noticed that he has good ties with his co-workers; he will often show concern for their well-being by buying them meals and such. 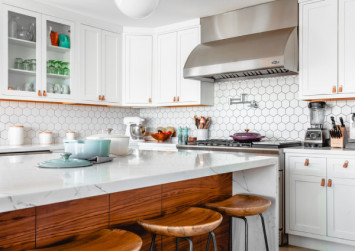 On the service side, Jason was also very understanding about our concerns and he would find ways for us to save.

For example, we initially wanted a more expensive stone for our counter and dining table, but he suggested another quartz option that saved us a fair bit.

The after-sales service is good too, because Jason just texted me asking how everything was!

G: Ultimately, for homeowners, the objective of a renovation is to create a place where you want to stay in, and I think Jason has done a great job at that and we're thankful to him for giving us such a cosy, comfortable home. In fact, it's better than we expected.

Nowadays, I just can't wait to get back from work to chill!