An orb-weaver spider. Not the species mentioned in the article.

For a species of tiny spiders commonly found around central China, generations of evolution, and a "safety harness", are required to survive the risky mating experience.

The spider, called Philoponella prominens, has evolved its front legs that act as catapults to rapidly "fling" the males away from the females after mating to avoid getting eaten by their partners.

The arthropods, a species of hackled orb-weaver spiders, live across central China and into the Korean peninsula.

Zhang Shichang a study co-author from the University of Hubei in central China said the study is the first to show arthropods used catapulting as a means to escape cannibalistic partners.

Previously, spiders were only thought to use catapulting action to "either escape natural enemies or capture prey, and were never used to flee from sexual partners".

Sexual cannibalism is not uncommon among insects and spiders — with praying mantises being the most famous examples — and other species of orb spiders have exhibited behaviours like wrapping the male in spider silk to consume him after sex.

The male Philoponella prominens have also evolved an internal belay system, using a silk web to act as a harness that catches them before they hit the ground. 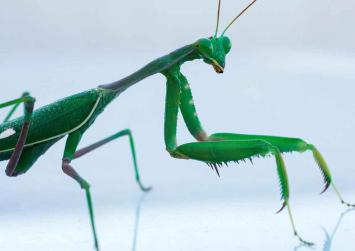 The male will then climb up the silk rope and continue mating with the female.

Males can mate with the same female up to six times, so the process creates a cycle of "bouncing off", whereby the male mates with the female, catapults away, catches himself with the silk "harness" and climbs back up to repeat the process.

For the three spiders who did not catapult away, Zhang said the spiders probably did not escape because "they had a low ability to sense the aggressiveness of the females, or were exhausted and unable to catapult away."

The female spiders end the mating process, so the males are not necessarily in control of when they should catapult away.

The team then inhibited the ability of 30 spiders to leap away after mating. All of them were eaten.

The scientists also cut the ability for some of the males to produce the silk ropes. While the males still catapulted off the females, they fell to the ground and did not return to the nests.

Zhang said that the cannibalism might be a way for female spiders to gauge if their mates are worthy of offspring. These female hackled orb-weaver spiders are able to "hold" the sperm of their mates to give them time to decide whether to accept it.

Philoponella prominens live in communal societies that sometimes exceed 200 spiders in a group, so eating a few males should not make a huge impact on the health of the populace.

Read Also
Listen to the music of a spider's web. Tell me what do you hear? 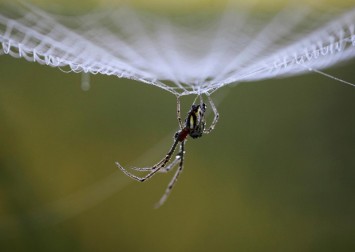 The catapulting mechanism itself is the result of "hydraulics" within the front legs of the spiders.

When the spiders are mating, the male bends its front legs on top of the female and, when it is time to escape, it releases a fluid into the legs that make them straighten with extreme force, flinging the spider into the air.

By tracking the spiders using advanced cameras, the scientists found that the males ejected at a mean speed of 66cm/s, which would translate to 2.3km/h over a longer distance.

However, it is the acceleration that is remarkable. The average peak acceleration clocked in at 201.7m/s squared, translating to 201km/h squared if the spiders kept that speed over a long period.

But acceleration does not equal speed, and these rates of movement were only clocked for about 4 milliseconds.

The discovery sheds light on the fascinating intricacies of evolution, whereby an antagonistic relationship between the sexes has forced the males to develop physical skills to avoid certain death after mating.