Sun's up: Why waking up one hour earlier can make you happier

Nicholas Moutafis has always been an early riser. Over the years, he’s gone from waking up at 6am to 5am every morning, a schedule that he says puts him “in the right headspace and mood” to have a productive day.

“After waking up at 5am, I drink some water and prepare my coffee,” says the 39-year-old marketing and business development manager, who was born in South Africa and has lived in Hong Kong since 2016.

“Then, I either read a little or write in my journal. Between 6am and 7am, I do my CrossFit workout, and at 7am I have breakfast and prepare both my and my partner’s lunches for us to take to the office. At 8am, I do 30 minutes of qigong and then get ready for work.”

Moutafis is grateful for these first few hours of the day. “Reading and journaling are good for my soul, CrossFit takes care of my body, and qigong calms my mind. This routine gives me more energy and makes me more productive throughout the day. It’s time for myself before the world wakes up and the daily pressures of life and work begin.”

Not everyone finds it easy waking up at the crack of dawn, but, according to a new study, you can enjoy the same feel-good benefits of early rising that Moutafis does by resetting your alarm just one hour earlier every morning.

The genetic study of 840,000 people, by the University of Colorado Boulder, the Broad Institute at MIT and the University of Harvard in the United States, found that waking just one hour earlier – but getting the same amount of sleep – reduces your risk of major depression by 23 per cent. Waking up two hours earlier seems to increase this benefit, according to the researchers. Their findings were published in May in the journal JAMA Psychiatry.

There are a few possible reasons for this. Early risers tend to be more in sync with typical work-rest schedules, whereas people who sleep late and wake up late often struggle to align themselves with this “societal clock”, which to them feels unnatural, leaving them feeling isolated and depressed. Morning people also get higher and earlier light exposure, which may boost their emotional well-being.

“We have known for some time that there is a relationship between sleep timing and mood, but a question we often hear from clinicians is: how much earlier do we need to shift people to see a benefit?” said senior author Céline Vetter, assistant professor of integrative physiology at the University of Colorado Boulder. “We found that even one-hour earlier sleep timing is associated with significantly lower risk of depression.”

Don’t feel bad if you find it hard waking up earlier. Our bedtimes, wake times and the amount of sleep we get every night are shaped by our job, lifestyle and whether our loved ones follow a similar schedule.

Genetics also play a part, says Kate Bridle, a lead sleep specialist and the founder of Sleep HQ, a sleep health consulting service, in Hong Kong. “Some of us are just morning people, and this is largely due to genetics and what we call our chronotype. This is our individual tendency to fall asleep at a certain time.”

That said, what matters more to your long-term health than sleeping and waking up early is sticking to a regular sleep schedule. “Getting sufficient high-quality sleep and following good sleep habits are key to maintaining optimal health,” Bridle says. “And don’t deprive yourself of sleep, because sleep deprivation is linked to poor mood and a higher incidence of depression.”

To change your sleep habits and start being a morning person, Bridle advises setting yourself the challenge of waking up at the same time every morning for two weeks, keeping the alarm away from your bed so that you’ll be forced to physically get up to turn it off, and exposing yourself to plenty of bright – and ideally, natural – light as soon as you wake up.

If you want to rise before dawn, she recommends investing in a light box.

“Light is the main regulator of our body clock, so using strategic bright light in the morning and keeping bright light exposure low about three to four hours before your new desired bedtime will eventually lead to a shift,” she explains.

“Once you’ve forced yourself up at your new regular time for a few days in a row and resisted daytime naps, you will naturally start to feel sleepier earlier in the evening. After two weeks or so, you’ll find it easier to wake up early.”

Feeling drowsy in the early afternoon? Head outside for a short walk to get some sunlight and fresh air, Bridle suggests. Stay well hydrated, as light, movement and hydration are all essential to optimising energy levels, and avoid caffeinated drinks at this time; they can affect your sleep quality later.

If you can go without caffeine for the entire two weeks, you’ll feel more energetic and enjoy better sleep quality in the long run. 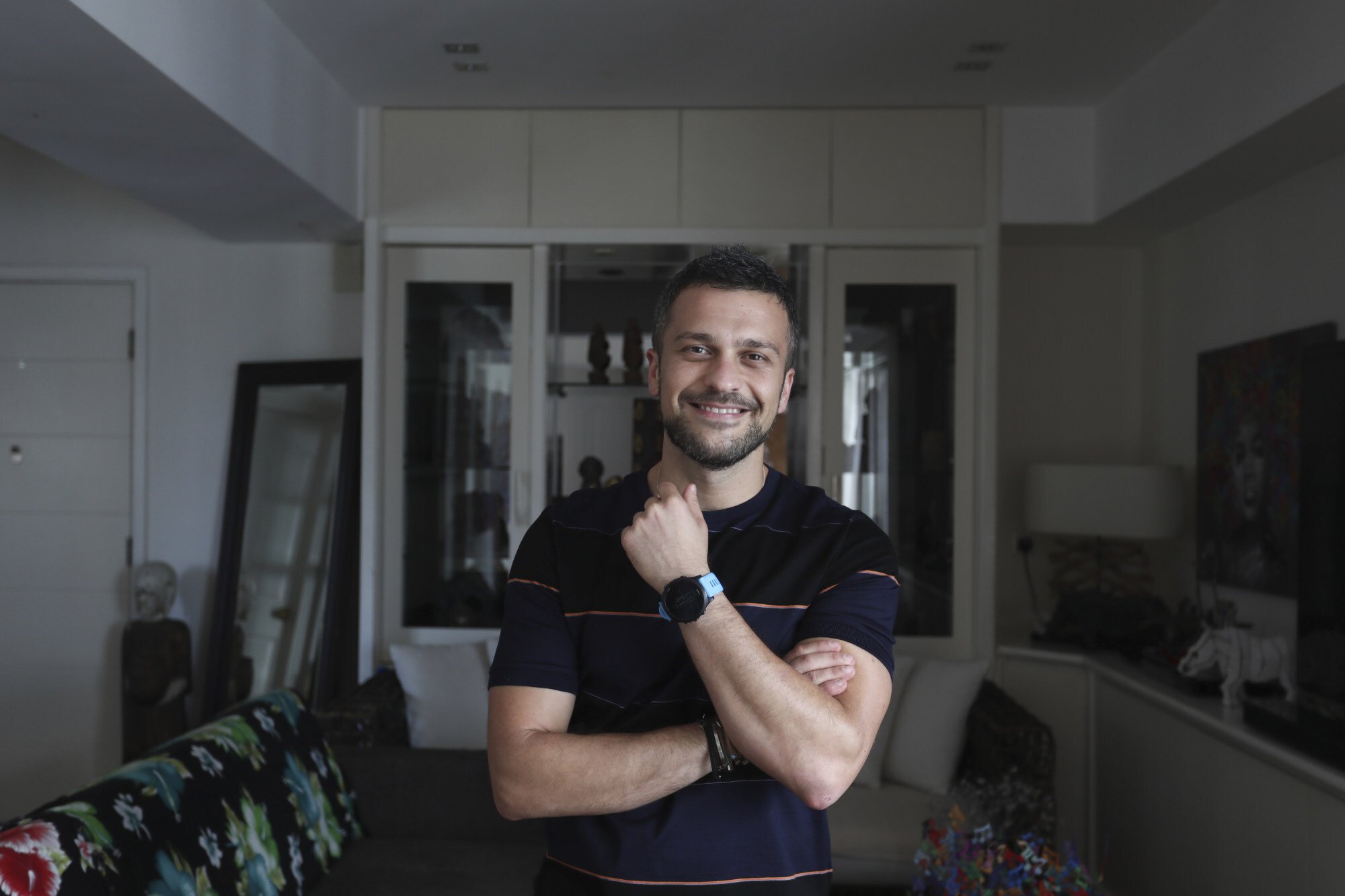 Moutafis gets an average of seven hours of sleep on weekdays, and more on weekends. Photo: Jonathan Wong

Moutafis gets an average of seven hours of sleep on weekdays, and more on weekends. He uses firm sponge pillows that keep his neck straight, and ensures that his room temperature is a constant 23 degrees Celsius (73 degrees Fahrenheit). Being an early riser is something you have to work on and get used to, he admits.

“When I decided to wake up at 5am instead of 6am, I did it gradually, waking up at 5.45am at first, and then at 5.30am, 5.15am, and finally, 5am. Initially, waking up one hour earlier did leave me feeling tired during the day, but I was adamant about sticking to my schedule.

“I also monitored what I ate, because certain foods can make you feel sluggish, plus I tried to be active in the afternoons and went to bed a bit earlier every night.”

Moutafis recently qualified as a qigong teacher, and when he finds himself getting drowsy in the middle of the afternoon he sometimes turns to the principles he learned during his training.“I focus on my breath and do stretches and activation exercises to get my chi (energy) flowing. One of my favourite moves is called “Knocking on the Door of Life”, which involves swinging your arms and allowing them to knock against your lower back and lower abdomen. This revitalises and rejuvenates my body so that I can get on with my day.”