A top made using 100 per cent recycled silk yarn, designed by Grace Lant for The R Collective.

Feed old garments to a yellow-fronted, 40-foot-long container in The Mills, a co-working retail and arts complex in Hong Kong, and you'll receive new, clean, wearable clothes in return.

That's all thanks to a hydrothermal recycling process that separates polyester and cotton blends, turning the polyester into new, healthy fibres and the cotton into a cellulose powder that can be applied to other products.

It's an impressive feat by The Hong Kong Research Institute of Textiles and Apparel (HKRITA), one that has been adopted by H&M, which released a collection of recycled clothing in 2020 through its youth brand Monki, and has since invested in an industrial-scale system in Indonesia that should be launched this year.

But it's also just one of many hi-tech solutions for a more circular fashion industry that Hong Kong has helped pioneer.

From collaborating on the creation of biofibres to advances in carbon-absorbing T-shirts and silk recycling, designers, mills and researchers are cleaning up the world's wardrobes, one garment at a time.

Hong Kong has long played a polluting role in fashion, going from a prominent textile manufacturing hub in the 1950s to a sourcing centre with strategic links to mainland China and Asean countries, but is "taking on its next role as a source of innovation and solutions for the industry", says HKRITA's chief executive Edwin Keh.

"We're able to have this great visibility to see what the issues and opportunities are, and then as a result of that we are also able to create these interesting research platforms with all the stakeholders involved," says Keh, who was formerly Walmart's chief operating officer for global procurement.

"We think of these not as purely science problems, but as business problems and logistics challenges."

The institute's solutions have profits in mind, which is important as the fast fashion market continues to grow - swelling from US$25.1 billion (S$34 billion) in 2020 to an expected US$30.6 billion in 2021, according to Research and Markets - despite the pandemic and the industry's environmental issues.

According to the UN Environment programme, the fashion industry produces more carbon emissions than the airline and maritime industries combined.

Hong Kong sends an average of 392 tonnes of textile waste per day into landfill, 50 per cent of which is clothing, reports the Environmental Protection Department's (EPD) statistics unit.

"We have less than a decade to crack the code on these types of processes," says Keh, who hopes to show companies that being sustainable can save them money by using less energy and materials, producing less water in the manufacturing process, and using the waste by-products. "But it's 'changing tyres on a moving vehicle' type of challenge."

During this pandemic period without travel, HKRITA has focused its experiments on the cellulose powder created by its hydrothermal recycling process. It has been able to use this powder in the production of a super-absorbent material used to grow cotton faster, with longer fibres and a bigger yield per acre.

This also means that cotton could be grown closer to manufacturers, making it easier to trace - which could do things like help brands that avoid using cotton grown in Xinjiang, where China has been accused of forced Uygur labour. Currently, around one in five cotton garments sold around the world contains cotton or yarn from Xinjiang.

"There's this great quote, which I'm happy to adopt as my own: 'Unfortunately, the easiest option is often the most regrettable,'" says Christina Dean, founder of Redress, an environmental NGO focusing on the fashion industry, and The R Collective, a social impact business working to reduce waste.

Dean has spent more than a decade advocating for a more circular fashion industry and her latest mini collection - designed by Grace Lant in collaboration with the High Fashion Group - uses IP (intellectual property)-sensitive fabric that's typically incinerated by brands.

Brands argue that incineration is the most cost-effective way of maintaining their exclusivity by preventing products with logos or distinctive prints from flooding the second-hand market.

"We can put a man on the moon, but we can't seem to recycle clothes, which is really annoying," Dean says.

In 2018, it was revealed that Burberry had destroyed more than US$120 million worth of clothes, accessories and perfume over the previous five years.

The brand defended itself by claiming to capture the energy generated from burning the products.

But critics - pointing to the release of carbon dioxide, greenhouse gases and plastic microfibres into the atmosphere during the process, as well as the fundamental waste of natural resources needed to create the garment in the first place - soon won. The company stopped incinerating later that year. 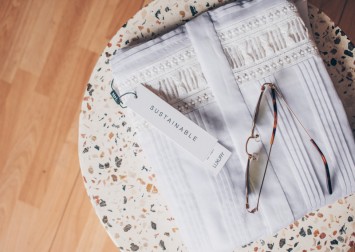 "Many global fashion businesses are sitting on waste materials [that include] fabric and garments and everything in between: trims, buttons, interlining, packaging, mannequins, hangers," Dean says.

Closed shops, cancelled orders and changes in consumer preferences, all as a result of the pandemic, have made the issue of waste impossible for brands to ignore.

Luxury group LVMH recently launched the online market platform Nona Source, where it resells fabrics and leathers by Louis Vuitton, Dior, Fendi, Givenchy and more, instead of letting them pile up in warehouses or having them destroyed.

However, Hong Kong's High Fashion Group has another solution. "To protect the brands' intellectual property, we shred the waste into smaller pieces before sending to a professional fabric recycler, making sure there is no easy way to directly make use of the fabric in any improper way," explains William Lam, executive director of the manufacturing company.

"Once the fabric is chopped into fibre, any prints or pattern would be non-existent."

Using 100 per cent recycled silk yarn, Grace Lant designed a top - with a mesh stitch on the body and solid trim - and a ribbed dress with a low back for The R Collective.

"For knitwear, the most important thing in a piece [of clothing] is the yarn," Lant says. "A lot of the time, you find the yarn and then think of the design and the stitches around the yarn. It was really exciting starting with this yarn." The brand that donated the silk fabric also offered deadstock buttons, which she also incorporated.

Lant says demand for recycled yarn has been growing, but as it is often an inferior material to regular yarn - it is much coarser - businesses want to pay less, but the current recycling process makes it more expensive. As these new recycling techniques reach the mainstream, she hopes to change people's minds.

There's also a need for clear, concise, authentic, verifiable information when it comes to sustainability. Every item of clothing has to go through tests: washing, durability, colour, as well as more obscure ones like water resistance and flammability, depending on the garment and the function. If consumers had all the information, it would make people understand why they're paying more for something made in a sustainable way, Lant says.

"You go into any food shop and it has to have the nutrition breakdown on it, calories, sugar," she says. "Why is that not applied to the garment world?"

It's not only recycling that can help tackle the climate emergency. Among other technological breakthroughs are carbon-negative fabrics that can suck CO2 from the atmosphere. In April, HKRITA won a design award for a cotton T-shirt that can absorb about one-third of the amount of carbon dioxide that a tree can absorb every day.

Other breakthroughs being pursued in Hong Kong include the development of virgin fibres made with the planet in mind, with researchers at Hong Kong Polytechnic experimenting with making a vegan leather out of a symbiotic culture of bacteria and yeast.

"One challenge for the fashion industry today is we basically have an outdated model and an outdated curriculum," Keh says. "We are promising people who are interested in fashion that they are going to be the next Coco Chanel, and so we attract creative, artistic types" but fashion today needs scientists as well as artists, he explains.

"We need people who understand materials science and engineering, who are able to work on some quantitative solutions. Those are the people that I think will actually change the industry and make a difference."