Swirls of fancy: Why India's jalebi is more than just a sweet snack

Fresh jalebis at a street stall. Unlike other Indian sweets, which are largely milk-based, this snack is made by deep-frying a batter made of flour, yogurt, cardamom powder and saffron, which is then dipped in a sweet syrup.

Their versions of the bright orange dessert were made to weigh 71kg and distributed to devotees to honour Modi.

But jalebi is not just a celebratory food for special occasions such as weddings and temple events. It is even considered a treatment for a range of ailments.

Its spirals remind some of the human intestine and grandmothers have been known to advise youngsters to eat hot jalebi along with a glass of warm milk to cure anything from headaches to intestinal problems or skin diseases.

The popular snack came to India in the 15th century, brought by Persian traders from what is now Iran.

The name originated from the ancient Sanskrit word jalvallika, meaning full of water, or thick sugar syrup, said George Mathew, the food and beverage manager of the Holiday Inn Hotel in Gurugram, a global outsourcing hub near New Delhi.

“After its arrival in India some 500 years ago, jalebi got a new avatar, new colour, crystallised texture and it became crispier,” said Mathew, who has extensive knowledge of jalebi and its history.

Since then, it has become intertwined with the gastronomic demography of South Asia.

Jalebi served with creamy rabdi (a sweet dish made by simmering milk until it thickens) is a year-round favourite not just in parts of India but also in Pakistan and further afield in Dubai, home to a thriving Indian diaspora.

READ ALSO: As if 2021 couldn't get any weirder, coriander cake is now available in Singapore

In Iran, zoolabiya is prepared on special occasions and also distributed to the poor during the Muslim holy month of Ramadan.

In Hong Kong too, jalebi is popular not only with the Indian diaspora (meaning a group of people who can either trace their origins to India or are Indian citizens living abroad) but also in the wider community.

“I love jalebis, and I often visit Chungking Mansion on Nathan Road, the Little India of Hong Kong, with my friends to relish jalebis,” said Nadia Ali, a 31-year-old online gold trader who is of both Indian and Chinese descent.

Unlike other Indian sweets, which are largely milk-based, jalebi is prepared by deep-frying a fermented batter made of all-purpose flour (maida), gram flour, yoghurt, cardamom powder and saffron, and then dipped into a sweet syrup known as chasni, made of sugar, spices, and water.

The batter is whisked until a ribbonlike consistency is reached.

It is then transferred into a muslin cloth shaped into a cone with a small pierced hole in the centre, and is artistically squeezed in circular loops into boiling hot ghee or oil, or is deep-fried.

The mushy, white swirls of batter quickly turn into crispy, golden jalebis, which are then immersed in chasni for a few minutes to retain the crispiness on the outside with a crystallised sugary exterior coating, and soft and chewy on the inside.

“The preparation consumes almost the entire day. We have to start early in the morning for customers coming for breakfast, and in the evening returning after a hard day’s work,” said Ramlakhan Yadav, owner of a roadside stall in New Delhi who has been selling hot milk and jalebi for two decades.

Read Also
Where and what to eat in Hainan, from coconut chicken to crab congee 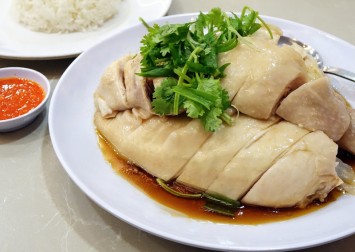 To chef Anuf Wadhawan, who owns a Pan Asian restaurant in Delhi, jalebi can also be enjoyed with savoury accompaniments, such as with chole poori (a dish of flatbread with masala chickpea) and yoghurt, or with fafda (a crispy savoury snack made of gram flour).

“Our menu has jalebi as a savoury dish and is named Jalebi Chaat that we make by adding sweetened yoghurt, sauces and toppings to the crisp unsweetened coils to produce a snack that is sweet, spicy and sour at the same time.”

Such is the popularity of the snack that it has even inspired a hairstyle – the Jalebi Juda, where women tie their hair in a spiral form resembling a jalebi.

The style is common in eastern India, particularly among women with very long hair, and is often worn on special occasions. But it is seen as going out of fashion elsewhere as younger women prefer to wear their hair loose.