Bidhya Shrestha is on a mission to change a commonly held prejudice about marginalised women in developing countries.

"Many from privileged backgrounds assume that women of colour in some countries are uneducated and helpless … in desperate need of a voice. They have a voice - we just need to listen to them," she says.

Born and raised in Hong Kong, Shrestha is majoring in gender studies at the University of Hong Kong. Earlier this year, the 22-year-old formed the non-profit organisation Aama Ko Koseli, which aims to empower marginalised women.

"The name loosely translates as 'a mother's token of love'," she says. "It aims to bridge the social divide between us and them - the 'others' from a 'third-world' country."

The organisation's first major project is a documentary called Project Untouchable Goddesses that aims to remove the taboo of menstruation, normalise discussion on the topic and show that women in developing countries are informed on issues such as menstrual hygiene.

For the project, Shrestha and members of the organisation visited Tatapani village in western Nepal to raise menstrual awareness and distribute chemical-free reusable pads that would last each woman for two years.

"We also talked with children from ages 10 to 17 and made comic books about menstrual hygiene to help get the message across."

One area they focused on was the tradition of chhaupadi that sees menstruating women and girls deemed "impure" and separated from family and village life. They are banished to huts, typically a livestock shed, where they are forbidden from touching other people and objects.

In 2005, the ancient Hindu practice was banned by the Nepalese Supreme Court following a number of deaths - many women have died from smoke inhalation while trying to stay warm in the huts during freezing winter months, while others have died from snake and scorpion bites.

But the practice still continues in some remote parts of the country, even after the country went a step further and criminalised it in 2017.

Studieshave shown that menstrual exile also causes health issues including diarrhoea and dehydration, hypothermia, and infections of the reproductive and urinary tracts. It also affects mental health, inducing feelings of abandonment, insecurity, guilt and humiliation for being labelled "untouchable".

"In one village, three girls were staying in a hut at the same time, some for up to seven days. The huts are small and basic - straw beds and no bedsheets," Shrestha says.

"For our project we are changing the dialogue. We are honouring these women as goddesses blessed with the gift of womanhood: menstruation."

Men were included in the discussion.

"It is essential that we teach both boys and girls to speak about menstruation and normalise it from a young age," Shrestha says.

"Some boys were shy at first, but quickly opened up. It was amazing to have boys and girls in one room discussing menstruation. The boys got a better understanding of what women experience, and that they shouldn't tease girls during this time." 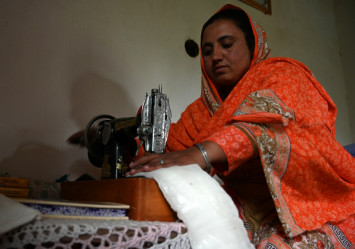 Many women Shrestha talked with - and many boys - do not like the practice, she says.

"But it's deeply rooted in the culture, with many believing they were going against the gods if they don't do it. There's a lot of fear. Many women believe something bad will happen to their family if they don't carry out the practice."

"In Hong Kong, women are automatically prescribed painkillers or birth-control pills when they suffer period cramps or something like endometriosis," she says, referring to a painful condition in which endometrial tissue grows outside the uterus, often in the pelvic area.

Little holistic treatment is offered for such conditions, she explains. "There are also few options when it comes to sanitary pads and tampons, with most available in Hong Kong not chemical-free.

"In these workshops, we want to arm women with knowledge so they can make better - and healthier - choices."

A screening of Project Untouchable Goddesses will be held on September 24 at the Rayson Huang Theatre, University of Hong Kong. For details, visit the Facebook page of Aama Ko Koseli Hong Kong.