These men used Iyengar yoga to banish knee and back pain, and control diabetes

As a former professional tennis player, Asif Ismail was used to living with injuries. Years of playing left him with a torn meniscus (the fibrous cartilage in the knee joint) in his left knee for which he had undergone surgery in 2008. Eight years later, in 2016, when Ismail suffered a meniscus tear in the right knee, the prognosis was grim.

He would have to undergo another operation and it was unlikely he would be able to play tennis again.

“While I understood the doctors’ concerns, I was inconsolable. Tennis was my life,” says 50-year-old Ismail, who is the tennis director at the Aberdeen Marina Club, a private member’s club in Hong Kong, and has represented the city and India in the Davis Cup .

Much to his doctors’ surprise, Ismail was back on the tennis courts and playing in the city’s club leagues barely a year after his second operation. He credits his recovery to yoga, which he started at his wife’s insistence by joining the specific needs class at the Iyengar Yoga Centre in Hong Kong (IYCHK).

Iyengar yoga is named after the late yoga master B.K.S. Iyengar, who believed that yoga was for everyone and formulated a system that allows people of all physical abilities to practice it and reap its benefits.

The specific needs class is for students with musculoskeletal problems such as pain in the shoulder, back, knees, or hips and other health issues such as hypertension, multiple sclerosis and chronic fatigue syndrome.

The centre’s head teacher, George Dovas, says the class differs from a conventional class in which all students are led through the same sequence of poses.

ALSO READ: Here's how yoga can help you combat all the ill effects of staying home all day

“Each student has a sequence tailor-made to address their condition with experienced teachers guiding them,” Dovas explains.

“Research suggests that movement is key in the recovery process of musculoskeletal injuries. In Iyengar yoga we prioritise quality of movement, and if a student is struggling, props such as ropes, bricks, bolsters and belts are used to enable the student to do the pose.

“Props are like training wheels. They allow students to learn a skill safely, and when the body has gained strength, the student is weaned off them.”

Ismail learned sitting poses such as virasana (hero pose) supported by bolsters, and bhekasana (frog pose) in a standing position, using ropes behind the knee to create space and length in the back of his knee.

“This made the asana and its benefits accessible to him. The original form of the postures would have been difficult for him,” says Dovas, who has been teaching for 15 years.

Ismail’s knee pain went away within a year. Although he couldn’t do the full poses initially, he was able to work his way into them using the ropes and bolsters. “I felt I was in a safe space with the teachers guiding and assisting me,” he says.

Yoga asanas involve movements that stimulate injured parts of the body by increasing their blood supply, and heighten the body’s ability to bear pain. The pose combination and sequencing is key for an effective healing process, Dovas says.

“Before designing the sequence, we consider several factors. How is the student feeling? Are they in more pain or less pain than normal? We sequence the poses in a way that the more demanding work is done in the first half of the class, with resting poses at the end. It’s the blend of active work and passive work that is key to the recovery process.”

In 2015, he suffered severe back pain and was unable to stand or sit. An MRI indicated he had spinal claudication, a narrowing of the spinal canal, which puts pressure on the nerves to the legs. He was also diagnosed with spondylolisthesis, a condition in which a vertebra slips out of place, putting pressure on the nerves and causing pain in the lower back and legs. Doctors said that he would need surgery.

“I was in acute pain, but the idea of surgery terrified me,” says 59-year-old Lee. Instead, three years ago he joined Iyengar’s specific needs class after a colleague recommended it.

“When Nelson first came to class, he could not stand straight. We focused on postures that straightened his legs, keeping his spine long, such as ardha uttanasana (half standing forward fold) with ropes around his legs to traction his back and help him straighten his knees.

“We gave him postures that allowed him to bend the legs such as virasana (hero pose), and several variations of bhekasana (frog pose) to reduce his pain,” says Dovas.

Lee says: “I was able to practice inversions such as sirsasana (headstand), hanging in the ropes. It took the pressure off my lumbar [area] and enabled me to strengthen my spine.” He has not needed surgery and has started attending regular classes as well.

“Through yoga I was able to build strength in my back and was able to sit and stand comfortably for longer periods of time. Seeing people with different ailments working on asanas guided by the teachers gave me a sense of comfort and motivated me. I felt I was not alone in my struggles.”

Chandan RoyChoudhury, based in Delhi, India, was diagnosed with Type 2 diabetes in 2009 and was put on oral medication and prescribed medication for high cholesterol. He was overweight and did not exercise. 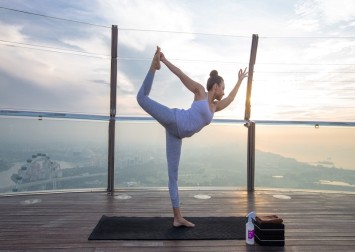 Inspired by a friend who had gone off diabetes medication by changing his lifestyle, 57-year-old RoyChoudhury decided to follow suit. He consulted a nutritionist and started on a diet and exercise plan that incorporated yoga. Within a few months, his blood sugar and cholesterol levels dropped dramatically, and he no longer needed medications.

“Yoga along with changes to my diet played a large role in helping me control my diabetes,” says RoyChoudhury, who runs his own corporate training business.

He focused on asanas that involve twists, such as vakrasana (seated twist) and ardha matsyendrasana (half lord of the fish pose). “These poses massage and improve the function of the liver, pancreas and spleen, which in turn facilitates better insulin production.

Bhekasana (frog pose) enables the pancreas to function properly,” says RoyChoudhury, who began practising yoga with a teacher and now practises on his own three times weekly.

The experiences of Ismail, Lee and RoyChoudhury show how a regular yoga practice under the right guidance can heal bodies that have been injured or even ignored and neglected. It can enable bodily systems to function as effectively as possible, to prevent and cure disease.