Travelling for 261 days around China on an electric motorcycle

A handout photo. The picturesque Kanas Lake, Xinjiang Uygur autonomous region, draws numerous tourists. The photo was taken by traveler Zhou Xiaobing, who undertook a 261-day journey on an electric motorcycle between June last year and the end of May.

The beckoning road proves too tempting for a traveler with an adventurous spirit and a passion to explore the country's natural beauty, Xu Lin reports.

When your destiny is the road less traveled then excitement and adventure is your destination. Zhou Xiaobing, 35, was back in Shanghai in late May after a bittersweet 261-day journey on an electric motorcycle.

In early January, he left his vehicle in the Inner Mongolia autonomous region and flew back to his hometown, Baiyin city of Gansu province, to spend Spring Festival with his family. The sudden outbreak of Covid-19 forced him to wait until the end of March to continue his adventure.

"The scenery along the road in our country is so fantastic. I've fallen in love with traveling. My journey will not end," Zhou says.

"It's great that I've made many friends, who are from all over the country. We still keep in touch through messaging apps.

"Also, I've learned to keep a cool head when things crop up, rather than acting in an impetuous way."

He traveled through summer, fall and winter, from sun-drenched fields to snow-capped mountains, from plains to plateaus.

He visited Rongpo Monastery, perched at an altitude of about 5,100 metres, to see Qomolangma, known as Mount Everest in the West.

He went camping at one of the coldest places in the country, where the mercury can sometimes drop to - 41 deg C during the night. 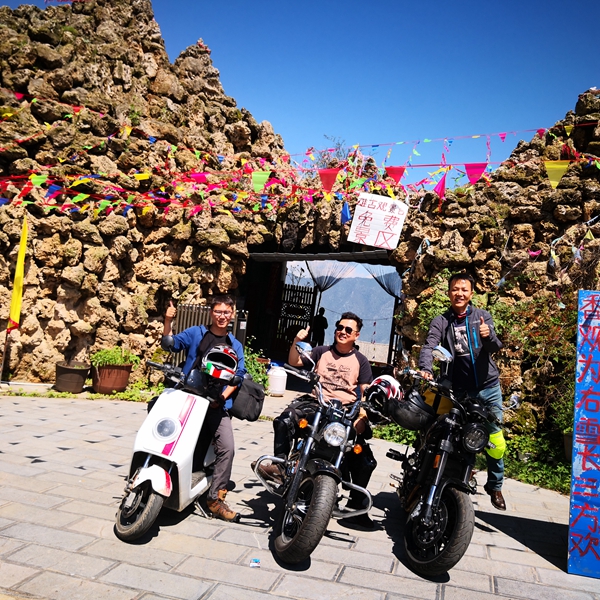 A handout photo. Zhou (first from left) meets two other travelers near a scenic spot in Yunnan province in August, before the duo head for Tibet autonomous region on motorcycle. PHOTO: China Daily/Asia News Network

Zhou runs an advertising studio with a friend in Shanghai, and it just so happened that the business was quite slack last year, so he started to plan a tour.

"Suddenly, the idea of biking around China struck me," he says.

"It's a dream that can be traced back to a decade ago, but I never had time for it."

Before he changed to a career in advertising, he was designing decorative patterns for bicycles. He always liked cycling and used to cycle around Shanghai with friends.

He decided the open road, not an office, was the place to be. He was brimming with confidence after reading online about others embarking on similar travel adventures.

His choice of vehicle was a practical decision. Riding an actual bike for a whole day would be tiring, and it was also hard to get a motorcycle license plate in Shanghai. So he chose an electric motorcycle.

However, charging the batteries can be a huge problem. He had two extra ones and every day he had to chart the distance to be traveled to make sure he had enough stored energy to get there.

"The faster the speed, the sooner the battery would run out. I had to anticipate the speed I should use so that I could arrive at a place to charge the battery," he says.

He rode about 140 km on average every day. In the afternoon, he recharged his vehicle in a restaurant or store, while he went on an excursion nearby. At night, he recharged it at a hotel. 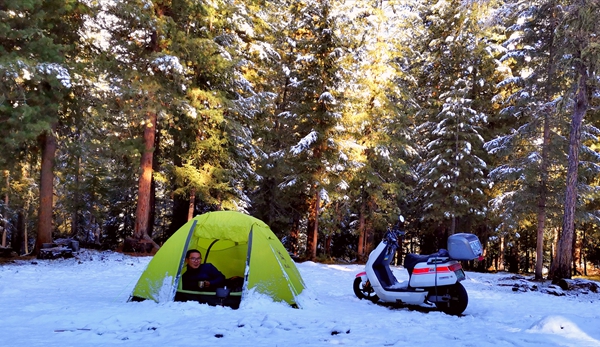 A handout photo. Zhou Xiaobing camps nearby the Kanas Lake in Xinjiang in October, when it welcomed its first snow of the year. PHOTO: China Daily/Asia News Network

He went camping at well-chosen sites to get close to nature. One such place was the picturesque Kanas Lake in the Xinjiang Uygur autonomous region.

In January, Zhou arrived at Genhe city, Inner Mongolia. He set up his tent there to experience the extreme cold.

He kept himself warm and wind-proofed with professional outdoor apparel in daytime, and used three sleeping bags and other items at night when the temperature could drop as low as - 41 deg C.

"Your eyelashes would freeze. In daytime the temperature is only around - 20 deg C," he says.

The scenery from the Tibet autonomous region to Xinjiang deeply impressed him.

"I would go for days without seeing anyone else on the road. At an altitude of about 4,500 metres, I slept on the vehicle. When I woke up an hour later, I was still alone. It was the most lonely moment of my life," he says.

So, when he did meet people, he would enjoy making friends and would actively chat with others on the road. He occasionally traveled with some companions.

"I had the same travel route as Zhou, but I was driving an SUV," says Gu Liang, from Xuzhou, Jiangsu province, who traveled with Zhou for a week in Xinjiang. "It requires willpower to travel so far on an electric motorcycle."

When Gu's car was stuck in snow, Zhou tried to help him to pull it out and stayed with him until a rescue team came.

"We just met each other. He could have gone, but he waited until the nine-hour rescue ended. He's a wonderful friend," Gu says.

Zhou was moved that many strangers extended a helping hand, especially the hospitable people of local ethnic groups.

In remote regions, Zhou stayed with them, offering him an opportunity to learn about local customs and dining habits.

"At a Tibetan's home in Sichuan province, I was expecting local dishes, such as yak meat, but I was served with rice, fried dishes and steamed buns. I then realized that they especially made these typical Han dishes for me as a guest," he says.

In Xinjiang, he arrived at a place guarded by a group of armed police, who allowed him to stay overnight, as there were no hotels nearby.

From Tibet to Xinjiang, he passed by an area that extended about 1,500 km, where locals rely on solar power and generators for electricity.

Once he stayed overnight at the home of a Kazak family in a remote village in Xinjiang where there was a power cut, and the hostess cooked noodles for him by the light of a candle.

Thanks to a national project, he says, the area will have steady power supply by the end of 2020.