In all its retro glory, an alley in Seoul -- serving grilled "seagull meat" -- has risen as a popular dining spot.

Though the name may indicate its location to be near a port city, "seagull meat alley" is actually situated at the heart of central Seoul, near Jongno 3-ga Station.

Don' let the name galmaegisal, which could mean seagull meat in Korean, mislead you. The name refers to skirt steak, the cut surrounded by spare rib, tenderloin and pork belly. Galmaegisal actually derives from "garomaksal," meaning the cut that blocks organs, and evolved over the years.

In Korea instead of being cooked as a piece of steak, it is enjoyed chopped into pieces that are grilled as at a typical local barbecue restaurant.

In a back alley of Donui-dong, 11 restaurants serving grilled skirt meat form a triangular cluster, with the restaurants occupying streets with tables and chairs placed outside. 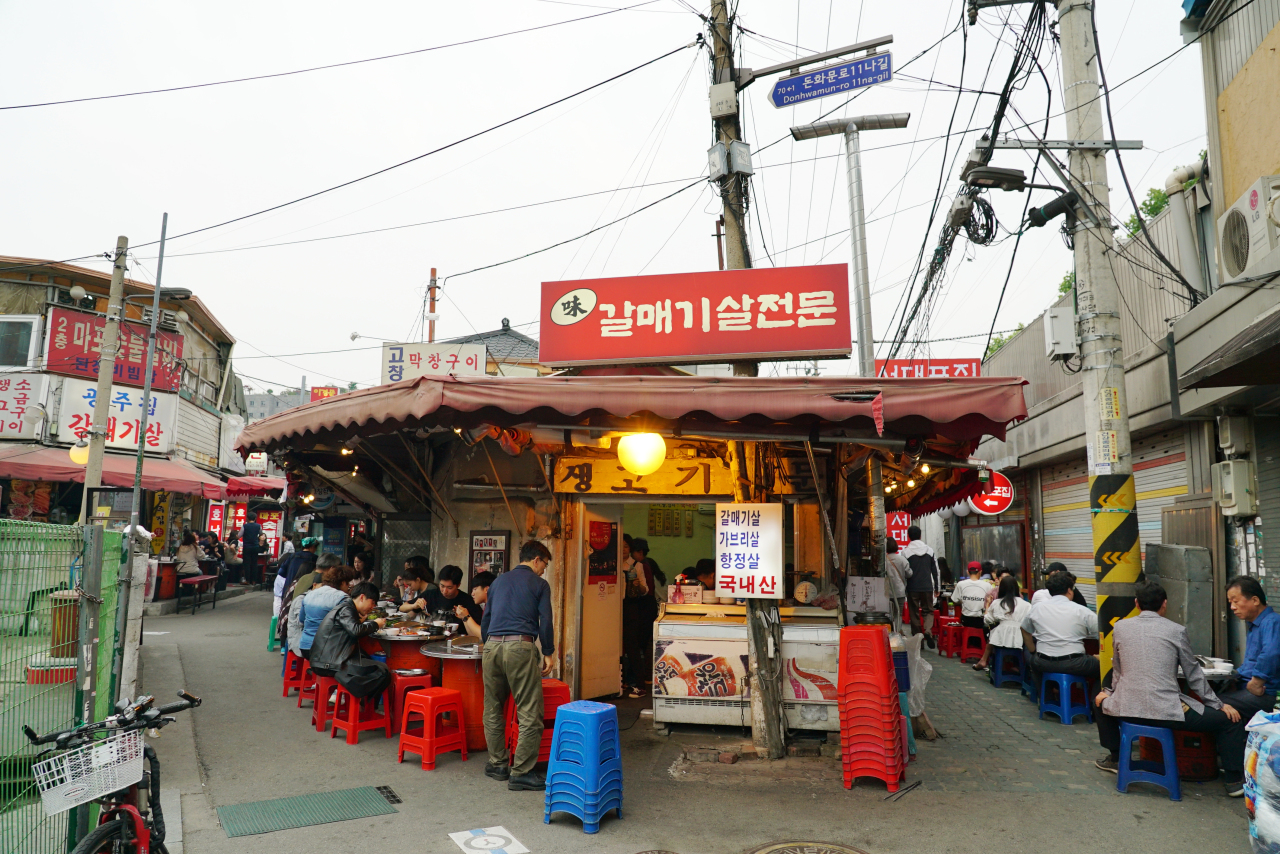 A back alley in Donui-dong, central Seoul, is home to a cluster of 11 restaurants serving grilled skirt steak. Photo: The Korea Herald/Asia News Network​​​

As diners grill meat at the table, smoke and the smell of meat being barbecued, fill the entire alley, making it impossible for passers-by to escape without an envious glance.

Galmaegisal is a flavourful treat at a much more affordable price compared to beef or other parts of pork. It is usually priced at 14,000 won (S$16.20) per person in the alley.

Though this particular cut of pork looks, tastes and smells much like beef, it is quite tough and sinewy.

Another specialty of the alley is gatkimchi, or leaf mustard kimchi. With its unique pungent taste, its mix with the meat is near perfect. The spicy, sweet and sour taste somewhat covers up the meat's sometimes-too-flavourful pungent smell.

The restaurants are packed early in the evening with diners of all ages -- from the men who have been visiting the area for the past 30 years to young college students looking for a retro-infused experience.

Adjoining Ikseon-dong, a hip district with traditional Korean houses that have been turned into trendy cafes, restaurants and shops, the seagull meat alley has been seeing a sudden rise in the number of young customers, and may be well on its way to being reborn as a hip new dining spot.