Eileen Gu is going to Stanford this year, that much is clear. But beyond that, the three-time Olympic medallist is keeping her cards close to her chest, for now anyway.

The 18-year-old leaves the Beijing Winter Olympics a bona fide star, a household name in China, and someone who has the world in the palm of her hand. After her historic two golds and one silver at Beijing 2022, California-born Gu now looks ready to slide from the Olympic podium into being one of China's biggest stars.

Her success at the Winter Olympics, her unblemished public persona, and a rare media savvy that crosses geographical lines, leaves the door wide open for a career in fashion, media, as a brand ambassador, a writer, academic, not to mention more competition.

"I've always said my goal is to be an ambassador for the sport and create bridges by breaking boundaries and records, and I'm proud to say that in addition to plenty of sleepless nights, moments of doubt and fear, and immeasurable growth, I had the best two weeks of my life," Gu wrote on Instagram.

But when it comes to questions about competition, it is a different story. "I'm a very competitive person and I'm also a very goal-oriented person," Gu told media during the Olympics. 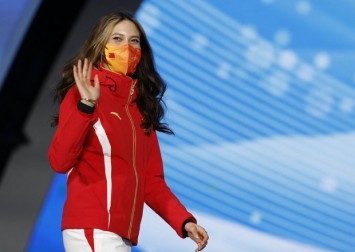 "In terms of competing, I have no idea what I am even doing next year. I would love to continue competing. But in terms of resources and time and what else I'm juggling, it depends. I'm gonna do whatever feels right and hopefully be able to create some positive change out of any decision that I make.

"I have a lot of big goals coming up in the future, but I don't really know what I'm going to be doing," she said. "You guys will have to stay tuned on that one."

Gu's success at the Games made her a rare athlete who is able to bridge the divide between the United States, where she was born, and China, the country she decided represents as an athlete. The ease at which she was able to wear both hats has earned her millions of new fans both within and outside China.

After the Beijing 2022 Olympics, the freeski phenomenon appeared live on Douyin, China's TikTok precursor, with superstar singer and actor Lay Zhang to talk about recording a song together.

As Gu and Zhang talked on the show hosted by Liu Yuxi, one of China's most famous TV sports hosts, the views and the likes racked up in their millions: Eighteen million were watching live at the peak with the video racking up more than 120 million likes.

Gu's Douyin account picked up 17.6 million followers in 15 days on the platform, with that number still rising fast.

And it's not just Douyin where growth is coming. On Weibo, China's Twitter-like platform, she now has close to six millions followers. Throw in another 1.4 million on Instagram and Gu has a global fan base at the tip of her fingers.

It's that celebrity power that has seen a growing list of Chinese and European brands sign Gu as a brand ambassador. The likes of Chinese milk company Mengniu, coffee chain Luckin Coffee, Quark APP, Cadillac and home appliance group Midea are just a few of a growing portfolio she holds.

Gu is not just digitally savvy, but has a certain kind of authenticity that brands want. She also has the special gift of being honest and open with her fan base — something she attributes to family, friends, coaches and "all the girls" who show their support.

"They not only push the envelope, but they do it with smiles, friendship and sportsmanship. You guys inspire me every day and I'm so fortunate to be a part of this amazing family," Gu says.

In addition to being the youngest freeskiing Olympic gold medallist in history, the first extreme athlete to win three medals in the same Olympics, the only person to win a grand slam, X Games, freestyle skiing female athlete at the World Championships and the Olympics, it's safe to assume that Gu will continue to keep breaking down doors in whatever she chooses to do next.

"My life belongs to me, I just do what I love. It's great if people support me, as I can encourage more children to get into in winter sports or to do whatever they want."