Why bag brand Medea, loved by Beyonce and Rihanna, is here to stay

On Feb 14, 2019, as most of the Western world was celebrating Valentine’s Day, Camilla and Giulia Venturini – the twin sister founders of handbag label Medea – were in for a big surprise courtesy of singer Rihanna.

Celebrities can do wonders for a fledgling label, putting it on the map just by being photographed wearing or holding its wares. What Rihanna did for Medea, however, went much further: she artfully staged an Instagram shot in which her hand appeared holding Medea’s signature shopping-bag-shaped tote with a rose inside – a subtle, carefully curated way of paying homage to Valentine’s Day.

While Medea had been around for almost a year by then and counted stores like London’s Selfridges among its stockists, that was the moment the twins realised that what started on a whim was now a real brand, as they explain in an interview from Milan, Italy.

Camilla and Giulia both studied fashion in Italy and moved to New York after graduation. Giulia spent two years there before returning to Milan, where she joined Toilet Paper, an irreverent publication founded by artist Maurizio Cattelan. Camilla, on the other hand, stayed in New York for almost a decade, and worked with photographer Ari Marcopoulos.

Their art background defines their brand, which they established in 2018 after meeting the owner of a leather factory based in Verona, Italy. Their idea was to make a leather version of the ubiquitous shopping bags from luxury stores. They named the company after Medea , a 1969 film starring opera singer Maria Callas as the mythical sorceress.

The bag that Rihanna posted on Instagram – Beyoncé is also a fan, by the way – was part of Medea’s first collection and was printed with a photo from New York artist Nan Goldin.

“Art collaborations were at the centre of the brand from day one,” says Giulia. “We wanted to make the bag a canvas for artists and had a wish list of artists we wanted to work with, and Nan was at the top.”

Getting someone like Goldin to team up with an unknown brand was quite the coup for the sisters, who say their success with the artist set a template for how they undertake all their projects.

“We know how to deal with artists and what to say and not to say and how to talk about their work. Often, when fashion professionals talk about art and do these collaborations, they do it in a very [transactional way],” says Camilla.

“We were just talking about art, and she appreciated that and trusted our vision and was attracted by the idea of working with a new brand – and being the first to work with us.”

While the Medea sisters may come across as artsy types who prize creativity above all else – even commercial success – there’s more to them than meets the eye. 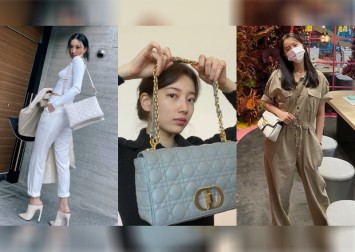 “If you ask me what kind of bags we like, I say Hermès because we love simplicity and things that are well done and adaptable,” says a confident Camilla.

The two have grand ambitions but have taken a cautious approach to building their brand. Unlike many up-and-coming labels under pressure to expand into new categories from investors who often know very little about how to grow fashion businesses, Camilla and Giulia believe in gradual and sustainable growth.

They co-own Medea with the owner of the factory that makes the handbags and with the founder of the showroom in charge of their sales campaigns.

“Oftentimes when you work with a factory or a showroom [as a new brand], you’re at the end of the list and there are other priorities and you’re just a client for them. For us, it’s different because the people responsible for the creativity, distribution and production all have [something at stake],” says Giulia.

Giulia and Camilla work with a small team of three, based at the factory, and a bunch of creatives from around the world to develop Medea’s striking visual identity.

“When I look at other similar brands, I’m surprised by how fast they move on to jewellery and sunglasses and other categories. We’re very cautious and want to be ready,” says Giulia. “We like to make bags so we want to perfect that and prefer to focus on side projects related to music or the arts rather than ready-to-wear [or other categories] that, in the end, you don’t really need.”

“We don’t compromise on quality. If you look at the first prototypes of our bags and the ones in stores now, there’s a huge difference; it looks like a simple bag to make but it’s actually very complicated and also very hard to copy,” adds Camilla.

As young creators and entrepreneurs, the Venturini twins also have to grapple with the overproduction that is typical of the fashion industry, especially as luxury consumers are becoming more invested in responsible consumption.

Making leather goods is not kind to the environment, but Camilla and Giulia explain that all their bags are made in Italy and all their suppliers are local, thus reducing their carbon footprint when it comes to transport. Their hides are also free of polluting chemicals such as chrome. 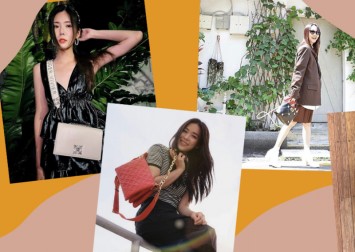 The designers, however, stop short of using faux or alternative leathers even though they have considered them.

“We got really excited about faux leather and mushroom leather and all kinds of alternative materials but, to be honest, we were disappointed. In the end, it was plastic and the breakdown was very fast,” says Giulia. “It’s never like real leather, especially for our bags [that have structure].”

Instead of compromising on what they believe is the best quality they can achieve, the two have launched Medea Scraps, a line of bags made with leftover pieces that allow them to reduce waste and use up more of the materials they order.

The twins’ simple yet genius idea of making an everyday item into a luxury object and their gradual approach to growth have helped them find the winning formula for independent labels that want to marry creativity with commerce.

Add to that the approval of a global tastemaker like Rihanna, and you have all the makings of a successful brand with staying power.