Why the Mercedes-Benz CLS53 feels out of place in Singapore

It may look the part, but the dynamic capability and drama of the updated CLS53 feels woefully untapped in Singapore.

I'll be honest, I never really got the CLS-Class (or really any other four-door coupe/fastback).

Based on the E-Class platform, the CLS-Class is meant to be positioned between the E-Class and the S-Class, offering a more sporty disposition.

In essence, it's taking an E-Class and making it less practical by deleting headroom and interior space. The previous two generations were also four-seaters, though this generation now sits five.

Clearly, though, I'm in the minority, because such cars seem to be highly popular among buyers.

If nothing else, it offers a more visually dynamic alternative to your standard executive saloon. And the stats bear this out - Mercedes has sold over 450,000 CLS models globally.

Now, there's also an AMG model for the CLS-Class, somewhat confusingly badged a '53'. Yes, the numbers don't really mean anything anymore (they used to correspond to the engine's displacement, once upon a time), but the 53 series uses a 3.0-litre in-line six engine supported by EQ Boost.

It looks quite similar to before...

So, couple of things then. This is a facelift. On the outside, there is a new front grille design, with the vertical slats giving the car a toothy grin.

Of course, this being an AMG model you also get the requisite AMG bits, including sporty air intakes, a chrome front splitter, an AMG-specific front apron, as well as an AMG spoiler lip on the boot lid.

It is a pretty-looking four-door coupe, especially from the side profile. The curvy shapes and elongated wheelbase makes for a stylish and distinctive looking car.

Inside, while the cabin look and feel is very similar to the previous CLS350 and CLS450 that we've driven, look closely and you'll see that some features have been updated.

The steering wheel and central control touchpad is new. And, the twin 12.3-inch screen MBUX infotainment system has been updated to the new interface as well.

I'm not a fan of the new steering wheel. The idea behind it is sound enough - to have literally all of the controls located on the steering wheel so you never have to take your hands off it.

So, the left touch controls operate the infotainment system, while the right ones control the dashboard. There's also the left rotary knob that controls all the functions otherwise operated by buttons around the central touchpad. The right knob lets you select between the different drive modes.

My biggest gripe is with the touch controls, which are just less precise than the previous generation design. I also find that this AMG-specific steering wheel (with the double stack spokes) feels too busy and chunky.

What kind of AMG are you getting?

This is also an AMG model, so there are performance enhancements as well.

While the electrified powertrain is the same one found in the CLS450, here it has been tuned to produce 429bhp and 520Nm of torque. Plenty of power, of course, but in today's bhp arms race it is far from world-beating.

Hell, Mercedes already manages to wring 416bhp from the 2.0-litre powerplant in its 45 models The powertrain is also supported by EQ Boost, which adds a heavy dose of refinement.

Engine start/stop is seamless, and because the 48V system helps to torque fill, the engine pulls hard across the rev range. At low speeds, the car is pretty grumpy.

It's long, the steering is heavy, and you definitely feel the heft of the car. U-turns are a pain, and the car feels extra large in tight spaces.

Get up to speeds, swing it through a few flowing corners, and it is a much happier affair - you can definitely feel the car shrinking around you.

The steering is accurate, the chassis well-controlled, and there's plenty of power and traction when you need it. This car also gets variable all-wheel drive, so you can feel the power being shuffled across both axes.

Of note, this AMG model gets the AMG Ride Control+ air suspension, and it's definitely on the bumpier side. It's great for when you want to drive fast, but in the Comfort setting it’s not very comfortable.

To AMG or not to AMG?

While it may not necessarily be my cup of tea, I must admit that the CLS-Class is a good car. It fulfils the brief - it's got the premium flashiness of a high-end Merc, it looks great, and it's still practical and functional enough.

But for an AMG model, I can't say I'm particularly excited by this CLS53. It's not that the CLS53 is bad. It's just perfectly unsuited for Singapore. 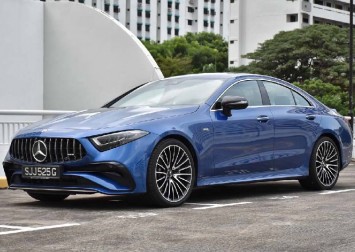 The visual enhancements can be had on the CLS450. And, the performance capabilities of this car are just woefully untapped in a place like Singapore.

Given sweeping country roads or winding mountain passes, this car would be a joy to drive. You can fully take in the drama that the car has to give.

But in Singapore where few such roads exist, what you end up with is all the compromises of this AMG model, without being able to exploit its advantages.

So if you really wanted a pretty-looking four-door coupe, you are probably much better off with the CLS450. This CLS53 just doesn't make sense here.