Yes, a dress really can save the world, says a 62-year-old Chinese artist

Kong’s latest work is a dress in the shape of inflatable glaciers.

Most women choose what they wear to flatter their bodies. For Chinese artist Kong Ning, though, fashion is a soapbox she can employ to call people's attention to some of the most pressing issues affecting the world.

And when she uses that soapbox, Kong goes the whole hog.

In 2015, she wore an outfit dotted with hundreds of 3M N95 masks (anti-pollution breathing masks) and traipsed around smog-choked Beijing.

In 2013, she stitched 999 respirators onto a wedding dress which she titled "Marry the Blue Sky" and wore it at the Beijing Exhibition Centre. In 2016, she wore a wedding dress - made of 100 inflatable white doves - at the National September 11 Memorial site and in Times Square in New York.

As Indian winters turn into not so mild summers, once again the topic of global warming become too relevant. Art has always been the catalyst to change : Global Chinese artist Kong Ning in a wedding dress made of the ubiquitous respiratory masks seen on the streets of her city, to motivate people to take individual actions and initiatives to fight air pollution and climate change. #gosustainable _________________________________________ #globalwarmingisreal #sustainablefashion #artistsoninstagram #kongning #performanceart #fashionrevolution #costumedesign #fashioncurator #ecofashion #gogreen #saveenvironment #love #weddingdress #womenfashion #ethicalfashion #instagood #instafashion #instafollow

To make people aware of how important heritage preservation is, she attached plastic models of Notre Dame Cathedral to a dress.

"I was heartbroken by the fire which destroyed Notre-Dame [in April]," says Kong. "I had to attend a solo exhibition on my works at the Museum Ludwig in Germany in early May. I went to Paris afterwards and wore the dress [when walking around Notre-Dame] to show that its spirit is still alive, even though it was destroyed."

Kong has made more than 60 such statement outfits since 2000 - the year she left her legal profession to become an artist. Most of her creations are themed around promoting world peace or environmental protection.

While these hyperbolic displays - often showcasing China's ills - can draw frowns from passers-by and police, Kong says the most common public reaction is bemused encouragement.

"Passers-by gave me a thumbs-up. Some gave me a hug. When I am in foreign countries, maybe people say I am crazy, just I couldn't understand their language. In Beijing, police used to see me [with my behavioural art], but they recognise me from media reports [and didn't give me any troubles]."

The 62-year-old says her behavioural art - or performance art - can be physically demanding; some of her dresses weigh 50kg. "[Sometimes] I feel I am going to faint. In 2016, in Heilongjiang [in China's northeast], to make people conserve water, I wore a dress [made of dried leaves and flowers and hemp cloth] called 'A Bride Who Does Not Bathe'. It was nearly 30 degrees Celsius."

The goal of her outfit was, she says, to highlight the problem of water scarcity and to get people to limit their bathing time to five minutes at the most.

"I have ancestors from [the] Daur [ethnic minority group], from Inner Mongolia, who see water as sacred. When I bathe and see [clean] water pass over my body [then go to waste], I feel heartache. I don't really like bathing."

Read Also
Half of China's rivers and lakes severely polluted 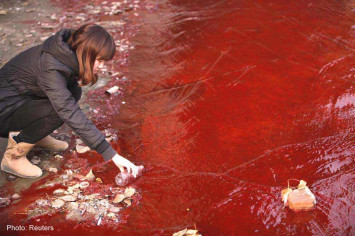 Kong was born in Manzhouli in Inner Mongolia, a city which borders Russia. She saw many military drills growing up, and she suffers from anxiety and paranoia as a result of them.

Kong can still remember when Russia and China fought over Zhenbao Island, or Damansky Island, in 1969 - a border conflict which resulted in her taking a gun to bed every night.

"My parents were taken from us during the Cultural Revolution [which lasted from 1966 to 1976]. Every day, I felt like war was going to come to us. I couldn't sleep lying prone - I had to curl up. At the sound of sirens, my brother and I would run to the cellar. My longing for peace stems from the fear in my childhood."

After she left Inner Mongolia in 1979, Kong took up residency in Beijing.

In 1992, she co-founded a legal practice with several lawyers, and families of convicts on death row would commission her to be their defence counsel.

She would put in so much work to help them that she began to suffer from insomnia and exhaustion. Eventually, she had a nervous breakdown and she tried to kill herself.

"In 2000, I was sent to a mental asylum. I started making artwork after leaving." Now, Kong is a prolific artist who has done 1,200 oil paintings and 20,000 ballpoint pen drawings, and who has written several thousand poems. Art, she says, is her therapy. "[After taking up art], I have never gone back to the asylum."

Kong's latest work is a three-metre-high dress in the shape of inflatable glaciers. She says she wants to make people aware of the urgency of global warming, and says she will soon begin a tour of Latin America in it.

"I want to wear the dress and go to the hottest places to raise a hue and cry. I have found an outlet for expressing my feelings. Even though I am in my 60s, I feel I have unlimited energy," she says.

"No one collects my art. Some of my works are displayed in museums. I don't care about [commercial art] collections. Earth is my artistic space. As long as I still live, I will clamour for earth's protection."