Why I Do What I Do: This ex air steward sells carrot cake now

Why I do what I do is a weekly series where we showcase uncommon professions and what it takes to go down that career path. In this episode, we feature Walter Tay, 31, who runs two carrot cake stalls together with his parents. Growing up in a family of hawkers, he had never intended to be one himself. We find out what made him change his mind and how he brought business to both stalls through his passion and fitness. #Whyidowhatido #hawker #hawkerculture Hawker: instagram.com/walkwithwalter

After leaving behind his cabin crew life in Singapore Airlines, Walter Tay embarked on an entirely different journey.

The 31-year-old first joined a multi-level-marketing company, then went on to importing Korean cosmetics and organising fitness competitions.

He was that boy with the good looks, living the high life with nice cars and expensive watches. It was a perfect life, until his later ventures failed again and again.

"I didn't want to be a hawker, it was a 'no choice' kind of situation", said Walter.

He believed that hawkers were being stigmatised as a low-SES (socioeconomic status) job and that helping out at his parents' stall when he was younger and getting treated rudely by customers caused him to be reluctant to become one.

Thankfully, Walter has since overcome his mental barriers and found a passion for whipping up plates of carrot cake and char kway teow.

Being able to spend more time with his family at the stall was a big factor that kick-started this career.

When asked what his biggest motivation to continue as a hawker is, he exclaimed, "Singaporeans!"

This is because he gets lots of DMs (direct messages) on his Instagram account rooting for him and his parents to continue what they're doing.

'THERE'S NO FUTURE IN THIS'

Walter's initial struggles as a young hawker were veterans asking him why he wanted to be a hawker and warning him that there was no future in this.

He also suffered from FOMO (the fear of missing out) when he saw friends going on vacations and partying at the coolest clubs in town while he was stuck at the stall.

But he is now bent on chasing his dream as a hawker and doesn't see a difference between his dreams and those who are running the corporate race.

He believes that everyone is doing what they love and it's important not to do it just to impress others.

The happiest experience in three years as a hawker was when kids came up to him and asked for a photo.

And the most interesting experience was a female customer telling him that she could not eat at his stall because her boyfriend didn't allow her to.

When asked which stall gets more business — his at Admiralty or his parents' at Bukit Panjang — he humbly shared that both stalls see quite an equal number of sales each day, but Admiralty draws a younger crowd coming to interact with him.

Of course, the media spotlight on him for being hunky and a young hawker has improved the business too.

LOOKS MATTER TO HIM

On that note, we found out that he is single and ready to find a partner with whom to settle down.

Looking slightly abashed, Walter said good looks are very important to him when asked for the qualities he's looking for in a partner.

He quickly clarified that by "good looks" he meant someone who is happy and approachable.

Most importantly, someone who loves life.

As for the plans for his business, "For the next three to five years, I hope to train more interested young people. I want to provide a platform for them to try out [hawker life]."

Walter has already started recruiting hawker interns and one of them is his cashier's daughter who is learning the day-to-day operations and frying up plates of carrot cake. 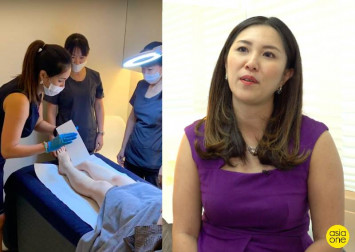 Eventually, he hopes to move away from cooking and focus on the marketing aspects of the business.

His advice for people who want to start their own hawker stall is that "it can be tough, but if you have the passion for Singapore hawker food, I will recommend you to try it out".

He added that instead of diving in headfirst, approach stalls that are willing to hire and train you, as the idea of pumping in $30,000 to $40,000 to set up your own and then failing can be quite daunting.

Walter sees his popularity within the fitness community and as a young hawker an inspiration to others.

"Being a hawker is like a reset button to my life."

#why I do what I do #hawker food