From Zendaya to Chloe Grace Moretz, women in suits and ties are everywhere — as men change out of theirs

While men seem to be ditching suits and ties, a lot of stylish women are wearing them these days, including actresses Zendaya (left) and Chloe Grace Moretz.

Call it a power move, a reaction to the dissolution of dress codes or a desire to subvert ideas of "feminine" and "masculine" dressing, but there sure are a lot of stylish women wearing suits and ties right now.

It's a look that's been seen on fashion catwalks in recent seasons.

Ties were paired with grey three-piece suits at Ralph Lauren's autumn 2022 show — fittingly, given that Lauren started his career with ties and provided the wardrobe for Diane Keaton in the title role in Annie Hall, a character who is, without doubt, the patron saint of women in ties.

At Dior pre-autumn 2022, Maria Grazia Chiuri paired ties with short-sleeved shirts, checked skirts and jumpers reminiscent of rebellious teenagers (the ones smoking behind the bicycle sheds).

Celebrities have been trying out the look, too. A non-exhaustive list includes actress Chloe Grace Moretz in a striking floral shirt, tie and cream trousers at the Louis Vuitton cruise show in San Diego and actress Mandy Moore in a Thom Browne suit with a pocket square for a press event for television series This is Us.

Alana Haim, dubbed the "queen of menswear" by magazine GQ this year, rocked Louis Vuitton leather trousers and a bomber with a tie, while Dakota Johnson paired her velvet suit from Saint Laurent with a tie for an appearance on US talk show The Tonight Show.

Zendaya was a knockout at the Vanity Fair Oscars after-party in a sharp Sportsmax suit and tie from the autumn 2022 suited and booted collection.

Meanwhile, actress Jessica Chastain made a statement just this week, accessorising her black Ralph Lauren halter neck dress with a white tie for the premiere of film The Forgiven at the Tribeca Festival in New York.

At fashion weeks around the globe, one of the key street style trends among attendees was slouchy tailoring worn with ties, as well as the return of the waistcoat; foulards and vintage scarves have been trending too, knotted around many a stylish neck.

This is certainly not the first time women have worn ties — they are a signature for singer Patti Smith, French actress Charlotte Gainsbourg has worn them and ties (and bow ties) were part of 1930s and '40s Hollywood star Marlene Dietritch's inimitable style.

Dietrich once said of her oft-copied look: "I dress for the image. Not for myself, not for the public, not for fashion, not for men."

The return of ties around women's necks comes at a time when men, for whom they were once a fashion essential, are more or less ditching them.

Even the most corporate environments hardly require a tie except for certain occasions, causing the Financial Times to declare the tie was, if not dead, then extremely ill.

As FT writer Robert Armstrong, who owns some 80 ties, said on the newspaper's Working It podcast: "I mean, you just walk around midtown Manhattan, you look around the FT office, and even if you visit a real business, a bank, law firm, whatever, it's very unusual to see a man in a tie, except in one of those very specific contexts where you're meeting with a CEO, you're doing a pitch meeting or you're presenting at a conference where something like that is expected.

"I love ties. I think they look great and I'm going to miss them, but it seems to me it's over."

It makes women wearing them seem slightly subversive, and a definite aesthetic choice. It also speaks to the continuing influence of menswear on womenswear — especially when it comes to suiting.

Suits for women have never been better. Holly Tenser, womenswear and children's wear buying manager at Browns Fashion, clocks the return of the waistcoat, and the influence of Annie Hall, as a prime example of this swing towards natty dressing for women.

Read Also
How to wear your WFH clothes to the office: A guide to help you get dressed in under 30 minutes 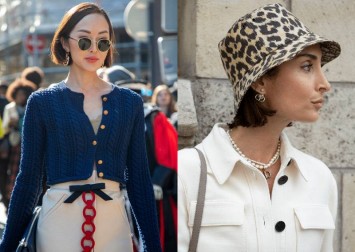 "Waistcoats are one of my favourite trends of the season. Worn simply and with nothing underneath gives this classic Annie Hall aesthetic a fresh, modern spin," Tenser says.

"We're seeing a real resurgence of tailoring within the womenswear sphere, worn dressed up and down, and three-piece suits are a great, versatile way to make a statement with your wardrobe, whether worn with a heel, boot or pared back with a trainer."

Those seeking inspiration, she adds, could turn to the likes of Kendall Jenner and Bella Hadid, who have been spotted in the rather spiffy look.

As for where to find the style, Tenser is a fan of cool girl label Frankie Shop.

"There were some incredible versions shown on the runway, but Frankie Shop is a firm favourite at Browns. The brand has created a perfectly proportioned wool waistcoat and paired this with some incredible oversized trouser styles to create a suiting update for a new generation," she says.

Libby Jane Page, senior market editor at Net-a-Porter, agrees the suit is having a moment for women as they readjust to office (and event) life. The Annie Hall -style waistcoat, she says, is a chic, and useful, addition to the suit.

"As we adjust back to office life, suits have taken back their rightful place in our wardrobes and they provide a versatility that can transcend seasons," she says.

"However, substituting a blazer for a waistcoat during warmer months is no doubt a smart move. Styling a waistcoat with nothing underneath is the easiest, chicest option for me and I love anything that makes getting dressed easy."

Page is also a fan of the versatility of a scarf and bandana, spotted both on and off the runway.

"The best thing about scarves and bandanas is that they can be styled in so many ways — knot them around your neck, add them to your ponytail or tie one to your handbag," she says.