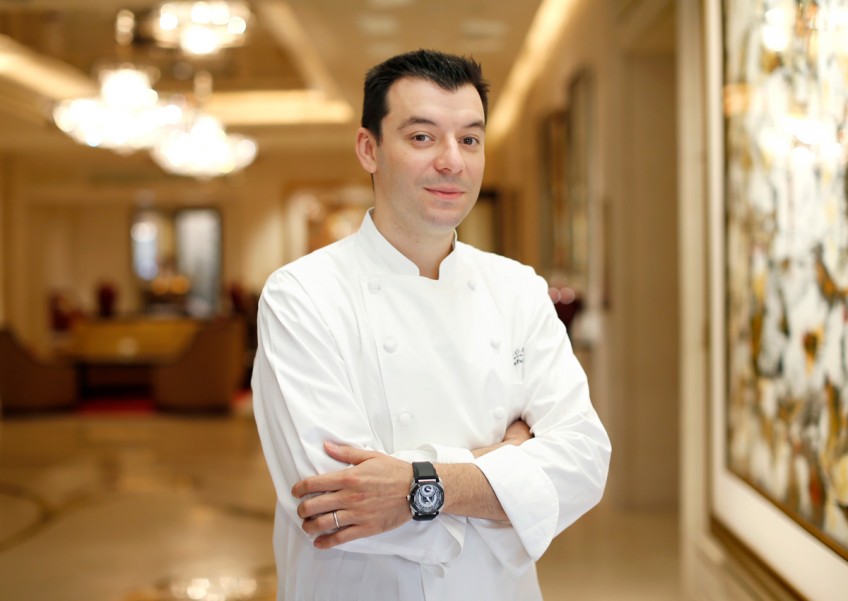 With the famed Tsukiji Market at his door step, it is surprising to hear Luca Fantin say that seafood is hard to source for in Tokyo.

The executive chef at Bulgari Il Ristorante Luca Fantin in Ginza says: "The fish in Tsukiji Market is good for sushi, but for my cooking, I need to go to the supplier."

And the process of getting the seafood that he wants is not merely a matter of going up to the supplier and getting them. He admits that as a foreign chef, Japanese suppliers are wary about selling their produce to him. "They worry that the working relationship may not last long, but I convince them that I'm serious about buying from them, by inviting them for dinner," he says.

Sometimes, getting suppliers to say yes involves going on fishing trips to see where the produce comes from. Chef Fantin rattles off a list of places he has been to: Oma on the northern most point of Honshu island has the best tuna; Mie prefecture is famed for its oysters and lobsters; while Hokkaido has quality scampi and scallops.

Compared with porcini grown in Italy, the Japanese ones are lighter in taste, he says, but they are fresher, and he much prefers them that way. He still imports about 20 per cent of ingredients from Italy, such as cheese, truffle and olive oil. "But by using local produce, I'm better able to create dishes that are more suited to local diners."

Chef Fantin was in Singapore during the week, where he was the guest chef at Amici Di Peroni, an exclusive event for a selected group of diners, where a one-night only dinner is held at a secret location and the menu is paired with Italian beer.

The dinner, held at the Robert Borsch headquarters in Bishan, featured a five-course menu, prepared by chef Fantin, with ingredients hand-carried in from Tokyo. Diners were wowed by Gambero pino, a raw prawn paired with a deep fried prawn head, as well as Garganelli molluschi, or pasta with mussels and abalone.

This is the first such Peroni event in Singapore and the company plans to host more.

Chef Fantin says that the dishes are similar to what he serves at Bulgari Il Ristorante Luca Fantin, a one-Michelin starred restaurant, where he serves a degustation menu that changes with every season.

The 36-year-old says that he has always wanted to be a chef since young. He started working when he was 13, in a trattoria in his hometown Treviso, before going to IPSSAR Castellena Grotto, an Italian culinary school.

Over the years, he's worked at several Michelin-starred restaurants, such as Cracco restaurant in Milan, and Gualtiero Marchesi's Osteria dell'Orso in Rome. He later worked outside of Italy, such as at the two Michelin-starred restaurant Akelarre in San Sebastian, before heading to Tokyo in 2007. The general manager of Bulgari Il Ristorante had called him over to be their executive chef. The restaurant then changed its name to Bulgari Il Ristorante Luca Fantin in April this year.

Despite working in Michelin-starred restaraunts, he doesn't forget his roots. "All chefs need to have a strong understanding of traditional food, and the only way to get that, is to start from working in a trattoria, and then work your way up," he says.

He brushes away the idea that chefs today are seen as celebrities. "I am an artisan," he says. "It is my job to make customers happy, to give them something special. After all, customers are the ones running the business."

He describes his cooking as contemporary Italian cuisine. "Traditional foods but transformed to suit contemporary times," he says. "The food is light and clean."

Perhaps this is why he says he doesn't have a favourite ingredient to work with, while he has three that he doesn't like using.

"No chopped garlic in my dishes, because I find the taste of garlic too strong," he says. He also keeps the use of butter to a minimum, and lastly no coriander. "It tastes like insects," he quips.

The restaurant closed for two weeks earlier this month, as a new kitchen was being fitted out. Chef Fantin tells us it is a very high tech kitchen, and his team are excited to head back in there. But one thing doesn't change - his way of working. Unlike in other kitchens where there are screaming matches happening (perhaps we've been watching too much Gordon Ramsay), chef Fantin and his team work in silence.

"The cuisine is very delicate, and one wrong move can ruin the whole dish. Focus is important, and the quiet environment allows everyone to focus," he says. "The new kitchen will be even quieter than the old one, since we are not using gas but electricity."

He adds: "I've worked in kitchens where it is a very noisy environment, but I told myself, when I head a kitchen, it will not be like this. This is my style."

This article was first published on August 22, 2015.
Get The Business Times for more stories.