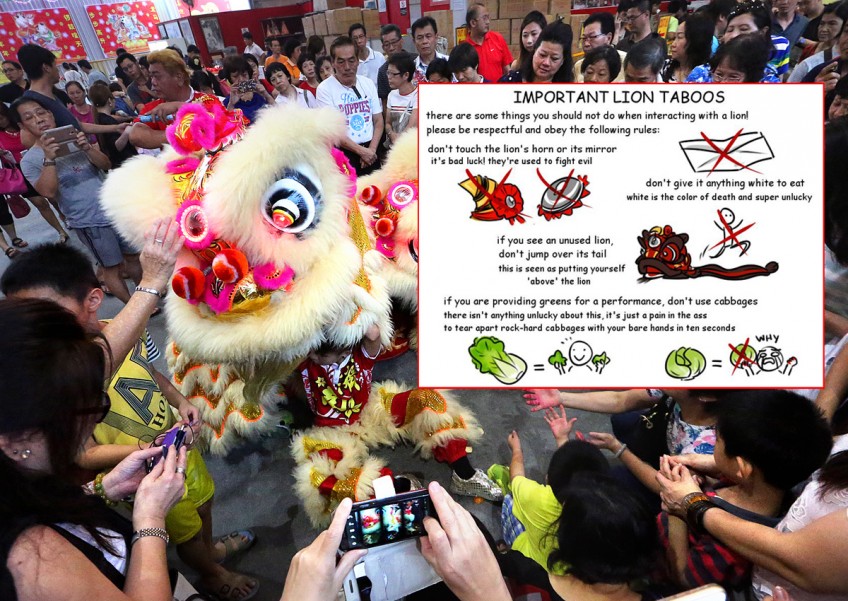 A colourful lion with huge blinking eyes and food hanging from its mouth dances towards you and rubs its head against yours. What do you do?

An artist, featured on the Facebook page of Singapore Hequan Institute of Wushu & Lion Dance, sheds some light on the traditional lion dance through a series of illustrations. The album has since garnered close to 800 shares.

The illustrations trace the origins of the traditional lion dance, highlight the misconceptions about lions, and point out the taboos of what you should or should not do when interacting with a lion.

It's the time of the year again when Chinese New Year (CNY) is around the corner. During this period, you might come face to face with a 'lion' as such dance performances are especially popular during this period to usher in the Lunar New Year, and chase away evil spirits.

Perhaps, you've also seen dragons in some of these dance performances. What is the difference between a lion and a dragon? According to artist Ireny, the lion has "four legs" and "two people", unlike the dragon which has no "legs" at all.

When it comes to taboos, one no-no is giving the lion something white to eat as the action symbolises death and bad luck. Definitely inauspicious.

Want to know more about what lion dance is about? Explore the gallery.

[[nid:253223]]
SUBSCRIBE TO OUR NEWSLETTER
Your daily good stuff - AsiaOne stories delivered straight to your inbox