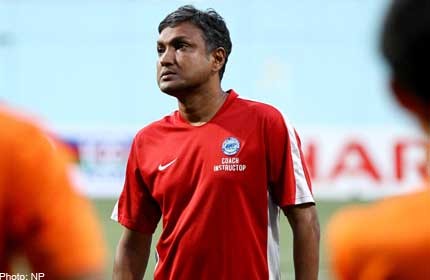 Dubbed "The Dazzler" for his skills, V Sundramoorthy was a household name during his playing days.

Now, 15 years into his coaching career, the 48-year-old has earned a reputation for himself as a coach.

In his second season with the LionsXII, Sundram masterminded a Malaysian Super League (MSL) title-winning campaign earlier this year.

Malaysian teams took notice, and no fewer than three clubs offered him lucrative contracts for next season since the league ended in July.

Sundram eventually opted for Negeri Sembilan, who will compete in the secondtier Premier League next year after finishing last out of 12 teams in the MSL this season.

While he is satisfied with the success in the last two years, Sundram said he's yet to hit the peak of his coaching career.

"To be honest, I haven't fulfilled what I want to achieve in my coaching career.

"That won't happen until I become the national coach of Singapore," he said.

"That is, for me, the ultimate test. Even if I last just six months in the job, I can at least tell myself that I've been there."

After his two-year contract with Negeri is over, the Dazzler said he is open to a return to Singapore, hopefully to take charge of the Lions, currently helmed by German Bernd Stange.

Another attractive option would be to coach the Singapore side that compete in the ASEAN Super League, which could begin as early as 2015.

"The ASL is something I'm looking at as well. That would be a very unique challenge, one that's on a higher, regional level," Sundram said.

"But we never know what's going to happen in two or three years from now. We will have to see the situation and if I'm given the opportunity.

'But I've always said I would love to coach the Lions. That hasn't changed."

Sundram began his coaching career as a player-coach for Jurong FC in 1999.

He led the club to two Singapore Cup finals (1999, 2002) where his team finished runners-up on both occasions.

After three years in the National Football Academy (NFA), he took charge of the Young Lions in 2007 and again in 2010.

Asked if he ever thought he would come this far, Sundram said: "It's not about myself as a coach, but what I can offer Singapore football. That's really all I think about.

"I was lucky to be given the chance by the Jurong bosses K Suppiah, Benjamin Pakiam and Ooi Chwee Kim.

"Since then, it's been a real challenge for me in the NFA and with the LionsXII.

"Whether I succeed in my next chapter (at Negeri), we will have to see.

"In football, anything can happen."