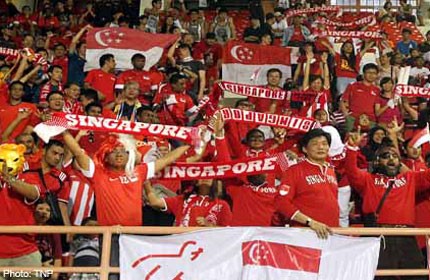 The $40 million Sports Excellence Scholarship does not disciminate against non-mainstream and disability sports as it will recognise and honour the achievements of diverse athletic talents. Athletes in sports like football, which may have yet to reach world-class standards but have a unique ability to unite a nation, will also be well-supported.

SINGAPORE - They have never made it to the World Cup Finals or Olympics, let alone won a SEA Games gold.

But Singapore's footballers can now take a slice of the funding pie meant to nurture the best of the nation's top athletes.

The Straits Times understands that a handful of footballers are part of the 218 nominations across 28 sports that are now being considered for the $40 million Sports Excellence Scholarship (SEC).

Unlike previous elite athlete programmes which focused mainly on those with the potential to deliver at the Olympic level, the scholarship aims to be more inclusive.

Apart from recognising the potential in both able-bodied and disabled athletes, athletes in sports like football, which may have yet to reach world-class standards but have a unique ability to unite a nation, will also be well-supported.

In fact, plans are being put in place to set up a special fund to bolster the Republic's chances to win its first SEA Games football gold on home soil, when it hosts the 2015 edition.

The idea was mooted during discussions the 11-member High Performance Selection and Performance Sub-Committee had, said Minister of State for Trade and Industry Teo Ser Luck, who chairs the committee.

"Special consideration should be given to football as it is one of the sports that can fill the whole stadium," he added yesterday after a media briefing to introduce the 11 members. "The sport has a special place in our hearts, that goes without saying. We realised that they should have a separate scheme and be put on a special track for the 2015 campaign."

However, it is understood that it could involve sending entire teams on overseas stints as well as securing attachments for promising players at clubs based overseas.

Malaysia, for example, sent its 2011 SEA Games team for training stints in Europe and were rewarded with a SEA Games gold. One footballer who could benef it from such moves is 17-year-old Adam Swandi.

Currently a trainee with French club FC Metz, he is expected to be a key member of the 2015 SEA Games squad.

"It's not cheap pursuing the dream of a professional football so any funds will come in handy," said Adam whose stint is funded by the Football Association of Singapore.

"When we have good financial backing, our minds can concentrate on getting the job done on the field."

The initial batch of SEC recipients are expected to revealed by September.

And while some surprises can be expected - it is understood that athletes from other team sports like netball and hockey are also being considered - bigger-name athletes such as swimmer Joseph Schooling and table-tennis player Feng Tianwei will be likely to feature prominently.

Mr Teo said his committee will pick successful candidates based on several criteria.

First, selectors will not discriminate against non-mainstream sports and disability sports.

The committee will select recipients based on their dedication to their craft, performance on the international stage and their ability to inspire Singaporeans.

In total, about 60 athletes will benefit from the scholarship.

Said Mr Teo: "What we are looking for is... those who can do well internationally, and we think they are promising and have a future."