Living in HDB flat as good as in condo 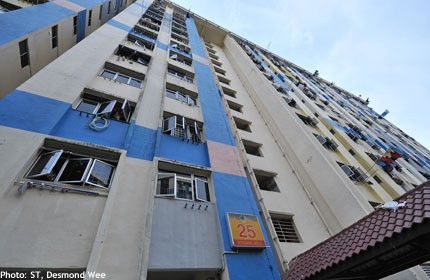 With the demand for condominiums rising lately, Singaporeans seem to have adopted a mindset that condos are better than HDB flats. But I do not think this is really the case.

First is the aspect of luxury. I do not deny that condos provide a luxurious environment where owners can enjoy the use of various facilities in the development, for example gyms, swimming pools and barbecue pits. However, all these can also be found around HDB estates.

Security is another aspect. There are security guards stationed at the entrance of the condo round the clock, and a verification card for access to the lift lobby.

However, this does not mean living in an HDB flat is unsafe. Police posts are situated around every neighbourhood and officers patrol the area routinely.

Third, some people may think that parking their cars in spaces provided by condos is safer than parking in public carparks.

However, condos provide only one parking space for each household unit. This means that if a household has two cars, only one can be parked in the condo's carpark, otherwise another resident would not have a space.

This is not the case in HDB carparks, which have numerous spaces, allowing residents to park more than one car there.

Living in an HDB flat is as good as living in a condo even as the Government's main aim is to ensure that all residents get a roof over their heads. So, why is there a need to chase after luxury goods and condos over an HDB flat?