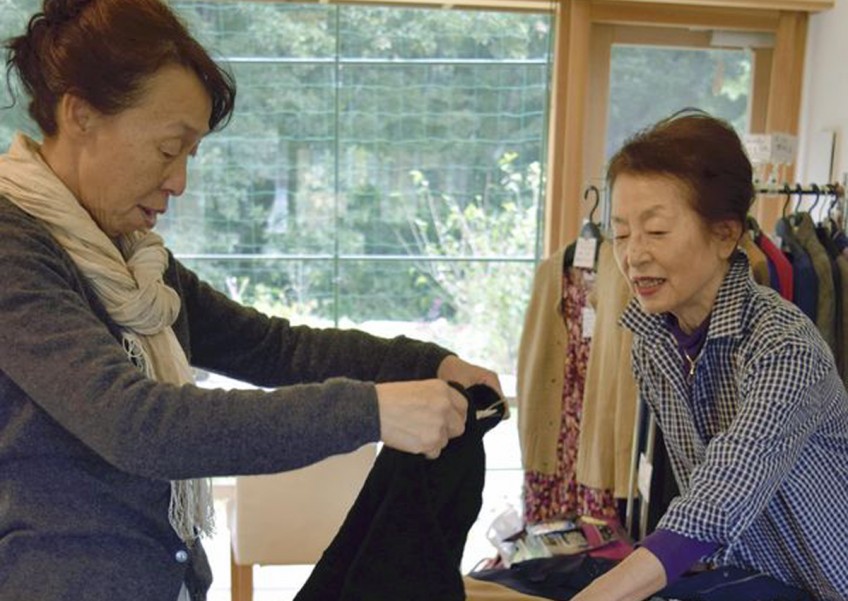 Teruko Maruta (right) works in a shop at Yuimaru Nasu in Nasu, Tochigi Prefecture. “This shop does not make a profit, but I’m glad customers are pleased with our products,” she said.
The Yomiuri Shimbun/ANN

Attempts are under way to get healthy senior citizens in urban areas to move to regional communities featuring integrated housing, medical care, nursing care and other services - in addition to a component known as "ikigai," or sense of purpose. The move is part of a government initiative to urge citizens to stay active throughout their lives.

How can community development that focuses on "being active" win the hearts of the elderly?

About 15 minutes from the Tohoku Shinkansen line's Shin-Shirakawa Station is the villa-like location of Yuimaru Nasu in Nasu, Tochigi Prefecture. It is operated by the Tokyo-based firm Community.Net Co.

The housing at Yuimaru Nasu comes with integrated services and is geared toward senior citizens. The location is barrier-free, while staff confirm the safety of residents on a daily basis, as well as offer life consultation services. The facility has a total of 70 lodge-style buildings, and their are currently about 60 residents.

Yuimaru Nasu has seen a flurry of visits from central and local government officials who have come to see the "activeness" of its residents.

Teruko Maruta, 72, who moved to Yuimaru Nasu from Tokyo this May, runs a shop in tandem with another resident in one corner of the dining hall building, which is open to the public. She uses her experience of having managed a boutique for a long time to sell residents' hand-crafted items, local products and more, in addition to clothes she has procured on her own. The shop has also been popular among tourists.

Aside from the shop, two men operate a shuttle service from the community that does a circuit of local stations and other locations, while one woman, who formerly worked in the kitchen of a nursing facility for the aged, works in a restaurant where outside visitors are welcome. An izakaya Japanese-style pub opens there once a week, and one man makes and sells soba noodles.

Maruta said her decision to move was because she became dissatisfied with a life of leisure including travel, watching plays, and so on. "I am glad I can do what I want to do," she said.

A new initiative was incorporated into the Basic Policy for Overcoming Population Decline and Vitalizing Local Economies in Japan 2015, which was approved by the Cabinet this June. Issues including large urban cities with insufficient medical institutions and nursing care facilities, along with concerns over weakening regional areas due to population decline, are behind it. The aim is to solve both problems by equipping regional areas with places where senior citizens can live actively and without worry.

More than 200 local governments across the country have expressed their intention to push forward with laying the groundwork for the initiative.

Residence exceptions, whereby the cost of nursing care for residents who have relocated will be borne by the municipality in which they originally lived, are to be expanded, thereby mitigating the burden on the municipality to which they relocate and adding momentum to the initiative.

Gojikara Mura village, which is located in Nagakute, Aichi Prefecture, has also received attention. The premises of more than 33,000 square meters have facilities including a nursing care home for people aged 60 years and older, day services, a home nursing station and a special nursing home. There are also facilities for younger generations, including a day nursery, kindergarten and vocational school.

Yaeko Yokochi, 72, and her husband relocated to the nursing care home from Nagoya five years ago. She keeps busy with work, such as taking care of children at the day nursery and welcoming kindergarten children. "It is fun, since I like children. I can also rest assured if I need care," she said.

At Yuimaru Nasu, an upfront payment for rent of more than ¥10 million is required at the time of move-in. Food, maintenance and other fees total around ¥120,000 (S$1,400) per month. People living at the Gojikara Mura nursing care home, which has income-adjusted measures to reduce the financial burden, pay from about ¥70,000 to ¥120,000 per month.

In late October, the central government determined it would grant subsidies of about ¥6 million to ¥87 million to 37 local governments eyeing development in line with the new initiative. Model projects will begin next year.

Each of those local governments is expecting the relocation of energetic senior citizens to jump-start their communities and lead to employment in connection to medical and nursing care.

In terms of convenient amenities, such as shopping, urban areas currently take the bigger slice of the pie, meaning the key will lie in whether the charms of these local governments can be promoted to counter the urban lifestyle.

Keiko Chikayama, vice president of the Community Network Association, currently lives at Yuimaru Nasu. She has been involved in residence development for the elderly for a long time and said: "It is imperative that local governments properly provide information to [would-be residents] to allow them to determine whether a location meets their needs. There may be a need for policy measures to keep costs down and ensure transportation convenience facilities."

However, Akitaka Tamura, the representative director of Tamura Planning & Operating Co., which engages in consulting on housing for the elderly, has a grim outlook regarding the situation.

"Leaving an area that you have grown accustomed to is hard on the body and mind. It does not seem like there will be that many senior citizens taking the step to actually relocate. There is quite a chance that what ends up happening is just an increase of nice buildings built on government subsidies," he said.