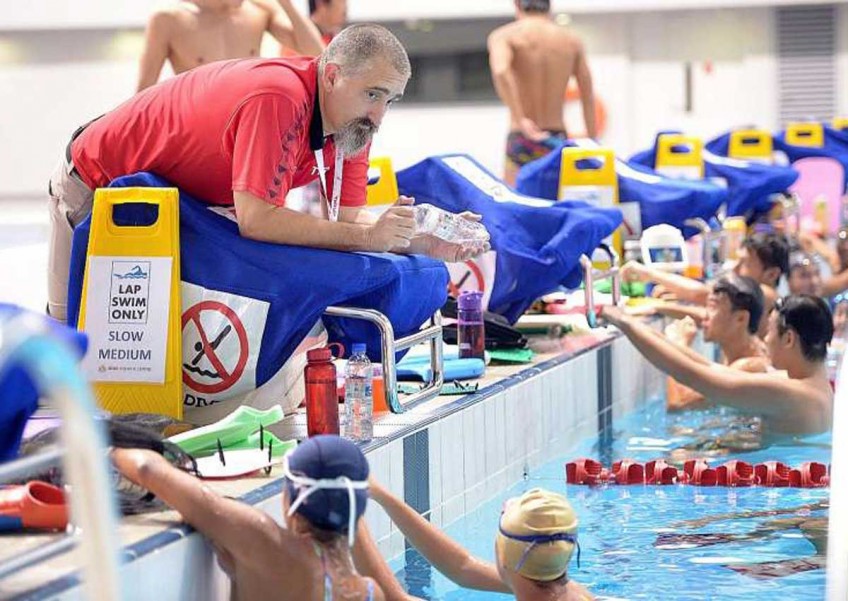 In a move that sent shockwaves rippling through the local sporting fraternity, national swimming coach Sergio Lopez announced yesterday that he will step down after the Olympics in August - less than halfway into his five-year contract.

In a press statement sent by the Singapore Swimming Association (SSA), Lopez, a Spaniard with American citizenship, said he is stepping down after receiving a better offer from the United States.

Lopez, a 200m breaststroke bronze medallist with Spain at the 1988 Olympics, said: "I've had a wonderful journey over the past 15 months and garnered much success with the wonderful talents in Singapore. However, I have received a good opportunity to move back to the US with my family and made the tough decision to leave my role here and return home."

Lopez, whose wife and two children are living here with him, will join the Auburn University swimming and diving team in Alabama as associate head coach. The Auburn Tigers compete in Division 1 of the National Collegiate Athletic Association, the highest tier of the American collegiate programme.

In the same statement, SSA secretary general Oon Jin Teik promised "minimal, if any, disruptions" to the national swimmers' training programme as SSA embarks on a search for his replacement.

Upon Lopez's departure, SSA said assistant coach Gary Tan will take over as acting national coach while they expect high-performance manager Sonya Porter, who was recommended by Lopez, to stay on.

A committee to headhunt the next national coach will be formed. The Straits Times understands that Lopez has offered to be on this committee to help ease the transition.

National swimmers were emotional when Lopez, 47, broke the news to them yesterday evening at the OCBC Aquatic Centre. Many, including the coach, broke down in tears, while others were stunned into silence by the bombshell.

SSA executive committee members and staff from the Singapore Sports Institute were present at the announcement. Some swimmers' parents were also present. The athletes were told to bring their parents for an announcement but had no idea what was in store.

A swimmer, who spoke on condition of anonymity, said there was confusion as to why Lopez stepped down. Some wondered if there was more to his departure.

After all, events in the pool have gone swimmingly since he was appointed, with the coach forging a strong bond with his charges.

That said, Lopez had voiced his dissatisfaction at the Singapore system, citing national service and the prioritising of academic pursuits as obstacles he had to deal with.

Another swimmer said Lopez was "an amazing coach in and out of the pool". And it showed. Under his guidance, the swimmers won a record 23 gold medals at last year's SEA Games.

Swimmers have clocked faster times. Quah Zheng Wen met the Olympic 'A' mark - which guarantees a spot at the Games - for three events. Addressing the concerns, SSA said it will further engage the national swimmers and their parents, including seeking their feedback in the search process.