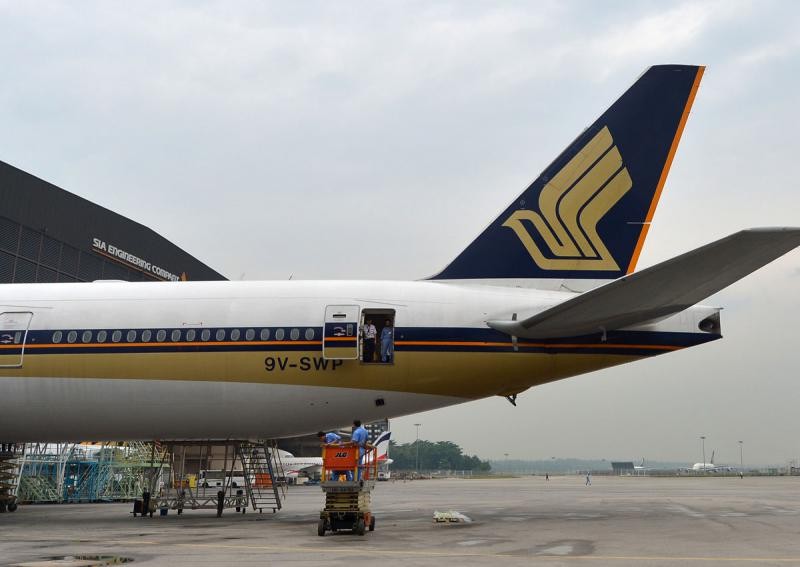 WHILE Singapore Airlines' return to its glory days of billion-dollar profits is hard to envisage at this stage, what is clearer is that its outlook is now looking a lot more positive than it has been in recent years.

This brighter outlook has not escaped the attention of analysts.

Even amid weakening yields, a number of them see it as an attractive "buy", their reason being that low jet fuel prices and a better hedging position will bolster the bottom line.

Bloomberg data shows that 11 analysts have a "buy" call on the stock, while six have a "hold" rating and two advise selling. The average target price is around S$12.41 while the counter closed at S$11.46 on Monday.

One of the main challenges facing the SIA group today is yield erosion as the Gulf carriers continue to expand, adding capacity in lucrative markets such as Europe. In Q3, passenger yields at the group's parent airline deteriorated 4.6 per cent year on year although it did rise 5.8 per cent quarter on quarter.

As analysts rightly pointed out, other potential downside risks include softer travel demand owing to a slower economy, currency volatility, continued weak performance from its cargo unit as well as higher-than-expected losses from associate companies.

But unsurprisingly, the current environment with jet fuel trending at 12-year lows is giving the industry a much-needed lift. Cathay Pacific, for instance, recently unveiled a 90 per cent jump in profit for 2015 to HK$6 billion, despite suffering heavy hedging losses.

For the fourth quarter ended March 31, about 47 per cent of the SIA group's fuel requirement was hedged at US$90 per barrel, while jet fuel prices are currently hovering at roughly half of that. However, even with hedging losses, the carrier's total fuel costs should still come down year on year. According to Nomura, SIA's total jet fuel bill should fall by S$515.1 million in FY17. (SIA is due to release its full-year results for FY16 on May 12).

At the same time, other elements of its growth strategy are coming to fruition such as its joint-venture pilot training centre with Airbus in Singapore - where 17 airlines have signed up - and the arrival of new, more fuel-efficient aircraft. In March, it took delivery of its first of 67 A350s on order, which it says will give it opportunities to grow its network with new destinations via direct flights. The new aircraft will also add to its inventory of premium economy seats, which offer fatter yields than regular economy seats.

Where its subsidiary airlines are concerned, OCBC Research analyst Eugene Chua expects profitability on both SilkAir and Scoot to improve further. Nomura expects Scoot to be a key topline driver for the group as it takes delivery of more Dreamliners. Scoot could also receive a lift from increased interlining traffic between Tiger and Scoot now that SIA has successfully won its bid to delist Tiger and take it private. With full ownership of the short-haul budget carrier, the group will be able to push for even closer ties between Scoot and Tiger as well as between Tiger and other airlines in the SIA group.

In addition, the group is expected to continue to build partnerships and collaborate with other carriers worldwide to expand its network and fend off competition from rival airlines such as Emirates and Qatar Airways.

SIA already has strategic partnerships in place with carriers such as Scandinavian Airlines, Air New Zealand, Virgin Australia, Lufthansa and Turkish Airlines. More recent tie-ups include a two-year partnership between SIA and Tourism Malaysia to drive tourist flow into Malaysia by tapping SIA/SilkAir's network as well as a new codeshare agreement with Air China. In the case of Air China, the agreement is currently limited to Beijing and Chengdu but this could lead to other opportunities if the two carriers deepen their partnership.

Meanwhile, speculation is also rife that SIA could boost its stake in Virgin Australia (VA) - which could trigger a take-over bid in line with Australian takeover laws - after Air New Zealand flagged that it might divest or pare its near 26 per cent stake in VA. While SIA has declined to comment on market talk, with its strong balance sheet, it has the financial muscle to make the purchase.

SIA, which already has a 23 per cent stake in VA, is among the Brisbane-based carriers' three biggest shareholders, the other two being Air NZ and Etihad Airways. Other names bandied as potential buyers by market watchers include Delta Air Lines, China Southern and China Eastern.

But a recent move by SIA was perceived by some analysts as a sign of SIA's willingness to continue to invest in the Brisbane-based carrier; it increased its stake in VA slightly from 22.91 per cent to 23.11 per cent after it paid A$3.18 million to settle a series of return equity swaps. And a bigger stake in VA may also give SIA the arsenal it needs to take on Qantas as well as block the Chinese carriers from swooping in and channelling traffic via Chinese hubs.

"Apart from Europe, Australasia is another key market of SIA, and a majority stake in VA may help SIA compete more effectively with the existing dominant player - Qantas," wrote Mr Chua in a report. "Therefore, we do not rule out the possibility of SIA buying over Air NZ's stake in VA. Gaining control of VA could lift SIA's competitiveness in the Australasia market with a larger presence and network synergy with the main group."

SIA's various growth strategies hold promise. While they may take a while to bed down, in SIA's favour now are cheap jet fuel and its better hedging position which are expected to contribute to its earnings recovery for the next one to two years.

This article was first published on April 19, 2016.
Get The Business Times for more stories.