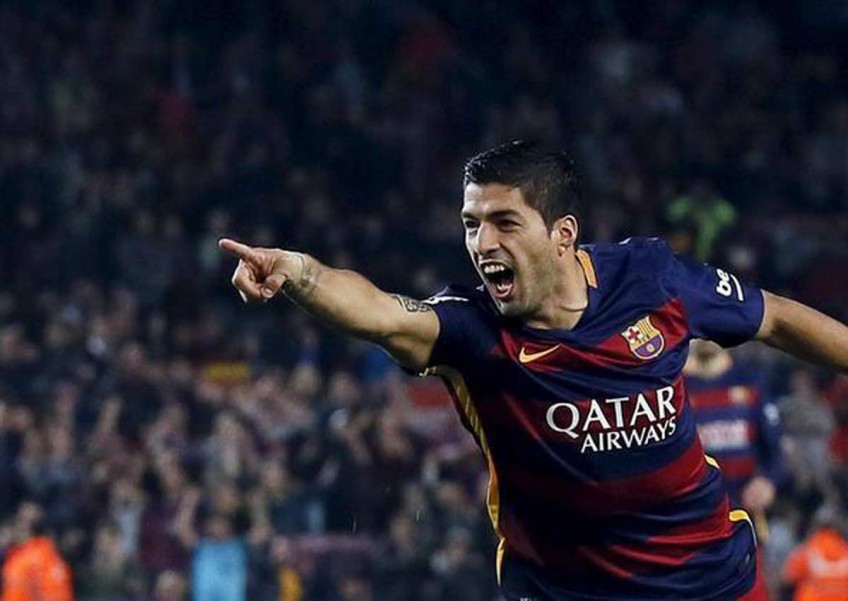 MADRID - Barcelona needed Luis Suarez to be at his clinical best with a hat-trick in a 3-1 comeback win at home to modest Eibar on Sunday which put the champions level on 21 points with arch-rivals Real Madrid at the top of La Liga.

Atletico Madrid, the only other team apart from Spain's Big Two to win the league in more than a decade, stayed firmly in the hunt when Yannick Carrasco scored the pick of the goals in a 2-1 victory at home to Valencia.

Real, who host Barca in the first of the season's two La Liga 'Clasicos' on Nov. 21, lead on goal difference with nine matches played after they secured a nervy 3-1 win at 10-man Celta Vigo on Saturday.

Atletico, the 2014 champions, are third on 19 points, one ahead of fourth-placed Celta, who are a point clear of Villarreal in fifth after they drew 0-0 at promoted Las Palmas on Sunday.

Barca's defence has been ragged this season and more poor play at the back allowed Borja Gonzalez in to give Eibar a surprise 10th-minute lead at the Nou Camp.

A well-worked move resulted in a simple header for Suarez to level in the 21st minute and Neymar drove into the area and fed the Uruguayan to make it 2-1 with a low strike into the corner three minutes into the second half.

Chances were scarce after the break until Neymar lifted a pass over the top for Suarez in the 85th minute and he chested the ball down and arrowed a shot past Asier Riesgo in the Eibar goal for his second La Liga hat-trick.

Suarez's third goal, his seventh in the Spanish top flight this season, came moments after Barca's Javier Mascherano was shown a straight red card for verbally abusing one of the assistant referees.

"We started off going behind, it was a difficult game because of that and that's what we need to start looking at," Suarez told Spanish television.

"Last season we conceded very few goals," added the 28-year-old, who made his Barca debut exactly one year ago on Sunday.

"These are phases in which every time the opponents get forward they score and we have to correct that."

Valencia centre backs Shkodran Mustafi and Aderllan Santos failed to clear the ball and Jackson Martinez pounced to put Atletico ahead in the 32nd minute at the Calderon.

Belgium midfielder Carrasco weighed in with a goal Cristiano Ronaldo would have been proud of to make it 2-0 five minutes later when he dashed down the left, cut into the middle and cracked the ball into the bottom corner.

Paco Alcacer pulled a goal back with a penalty 18 minutes from time after Diego Godin bundled Mustafi over in the area but Valencia were unable to find another goal against a typically robust Atletico defence.

Basque side Eibar, who were relegated last season but gained a reprieve when Elche were thrown out of the league for tax irregularities, are seventh on 13 points, level with sixth-placed Deportivo La Coruna.

Valencia are one of four teams on 12 points along with Sevilla, Real Betis and Espanyol.

Real Sociedad pulled away from the relegation places and up to 14th when they won 4-0 at Levante, with Mexico forward Carlos Vela hitting a double.