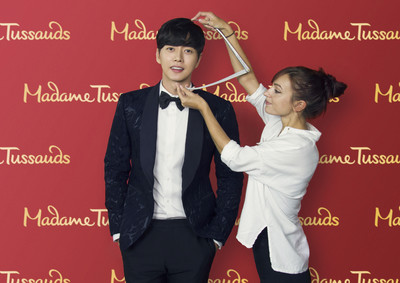 Park Hae-jin made his debut in the 2006 weekend drama Famous Chil Princesses . He is a prominent Korean actor who known for acclaimed roles in dramas such as blockbuster series My Love from the Star , Doctor Stranger and, most recently, Cheese in the Trap . The drama gained him nationwide recognition and he was awarded the Best Actor in Korean Cable TV Awards 2016. Park's figure will join other Korean heartthrobs like Suzy Bae, Lee Jong-suk and also Kim Soo-hyunat K-Wave Zone.

During the 7-hour sitting process, Park worked closely with the sculpting team and demonstrated his professionalism. ''I can't believe I'm getting my own figure,'' commented Park Hae-jin. ''The team took very precise measurements and short hundreds of photographs from every angle. It was an unforgettable experience and I am looking forward to see the finished figure!"

''The arrival of Park Hae-jin at Madame Tussauds Hong Kong will definitely create more memorable experience to our visitors. Guests will soon be able to see Park Hae-jin at our attraction. We are thrilled for him to be joining our K-Wave Zone alongside other red-hot Korean celebrities," said Jenny You, General Manager of Madame Tussauds Hong Kong.