Magical views from top of the world for solar eclipse 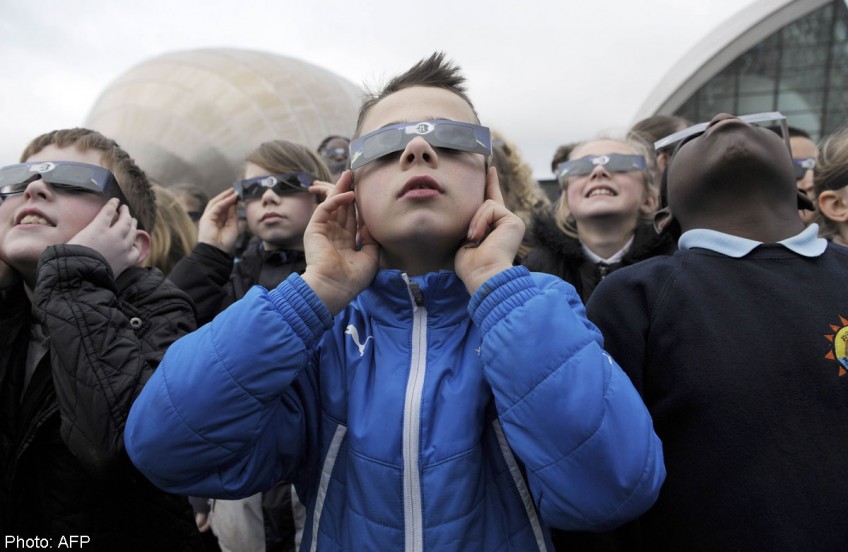 LONGYEARBYEN, Norway - All eyes were turned to the heavens early Friday for a solar eclipse offering spectacular views from selected airplane seats, European countries with clear skies and a remote Arctic archipelago.

Die-hard eclipse junkies flew in from around the world to the Faroe Islands and Norway's Arctic Svalbard archipelago to observe the less than three minutes of daytime darkness, a phenomenon that has fascinated mankind since the beginning of time.

Europeans got their first glimpse through cloudy skies in Spain's Canary Islands in the early morning.

"We can see perfectly well the disc of the moon... It is one of the most marvellous astronomical spectacles you can see," Alfred Rosenberg, an astrophysicist at the Canaries Astrophysics Institute told AFP from the island of Tenerife.

In the Swedish capital Stockholm a crescent-shaped sun shone through overcast skies as temperatures dropped, prompting people in the city's business district to stop and take pictures with their smartphones.

"There are drifting clouds, and there is a large blue hole on the way. We've just had a quick sighting of the sun which is now almost half covered," Ole J. Knudsen, an astrophysicist at Denmark's Aarhus University told AFP from the rainy Faroe Islands capital Torshavn.

As with previous eclipses experts warned the public not to look directly at the sun due to the danger of eye damage.

Around 500 people gathered in London's Regent's Park under an overcast sky, hopeful of a glimpse of the partial eclipse as it moved across European skies before heading northwards via North Africa and the Middle East.

Eight-year-old Rufus Aagaard had brought along a home-made viewer, fashioned out of a cardboard tube.

"It's made of cardboard, paper, Sellotape and tin foil, and a pinprick on the end," he told AFP.

A group of 50 Danes bought tickets aboard a Boeing 737 chartered by a science magazine to watch the event from the skies above the Faroe Islands.

While they will be shielded from the vagaries of Faroese weather, there are some things they won't get to experience when watching the eclipse from the sky.

"If you're on the ground you can hear the birds behaving differently, and the temperature falls," John Valentin Mikkelsen, a 63-year-old teacher from the Danish city of Aarhus told AFP.

The threat of polar bears

In Svalbard, which is just emerging from four months of winter darkness, hotels have been fully-booked for years ahead of the event, the 10th solar eclipse of the 21st century.

In the Arctic archipelago, where everything is extreme, visitors must contend with temperatures as low as -20 Celsius (-4 Fahrenheit) at this time of year.

And then there's the threat of roaming polar bears.

A Czech tourist who was lightly injured in a polar bear attack on Thursday served as a reminder of the danger posed by the animals, which have killed five people since 1971 in Svalbard.

Total eclipses occur when the moon moves between Earth and the Sun, and the three bodies align precisely.

The moon as seen from Earth is just broad enough to cover the solar face, creating a breath-taking silver halo in an indigo sky pocked by daytime stars.

Elsewhere, the eclipse was partial, to varying degrees: the sun was 97 per cent hidden in Reykjavik, 93 per cent in Edinburgh, 84 per cent in London and 78 per cent in Paris.

The next total solar eclipse visible from Europe is not due until August 12, 2026.

Another celestial phenomenon is also expected on Friday.

Earth's satellite will appear as a "supermoon," which happens at its closest point to our planet, its perigee.

This, and the moon's alignment with the sun, will add to the gravitational pull on the seas - creating what is literally a high point in the 18-year lunar cycle.

The celestial ballet will on Saturday result in major tides most perceptible in Canada's Bay of Fundy, on the French Atlantic coast, in the English Channel and North Sea - but even the Mediterranean will feel the difference.