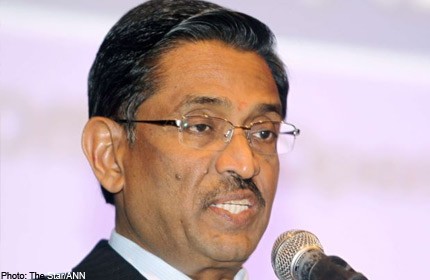 BANGI - The Education ministry has been directed by the Cabinet to look into weaknesses in the selection procedures for entry into local universities in light of the failure by top scorers to gain admission.

Health minister Datuk Seri Dr S. Subramaniam said the ministry also needed to be more transparent in the manner which the selection process was currently being done.

"I think this can be solved with more transparency, for people to know how the selection process is conducted. It's the system (that is the problem), not so much on the number of places," he said after launching the National Science Fair for Young Children 2013.

Elaborating, Dr Subramaniam said a lot of students with a cumulative grade point average (CGPA) of 4.0 wanted to do medicine but universities could only take in selected numbers due to limited seats.

He said there were mechanisms in place to evaluate the suitability of the students, taking into account their co-curriculum and their performance during the interview admission process.

"The issue is transparency and to let people know what exactly is happening. What's happening here is not that much different from other countries. In all countries, not everyone who applies get a place in universities," he said.

He said majority of eligible top scorers were given places in local universities, and only about 30 per cent of those failed to either gain entry or courses of their choice.

As a result, he said these students could appeal.

"The Cabinet will look into how to place them in private universities if their appeals are unsuccessful," he said, but cautioned that they had yet to discuss whether to provide those who were placed in private institutions of higher learning with scholarships.

Hundreds of students, including 55 with perfect cumulative grade point average (CGPA) of 4.0 had not gained places to study courses of their choice or failed to be offered places in universities.

They had cried foul and had approached MCA and MIC for help.

In a tweet, Prime Minister Datuk Seri Najib Razak had pledged to discuss the matter in Cabinet on how to help the affected students.