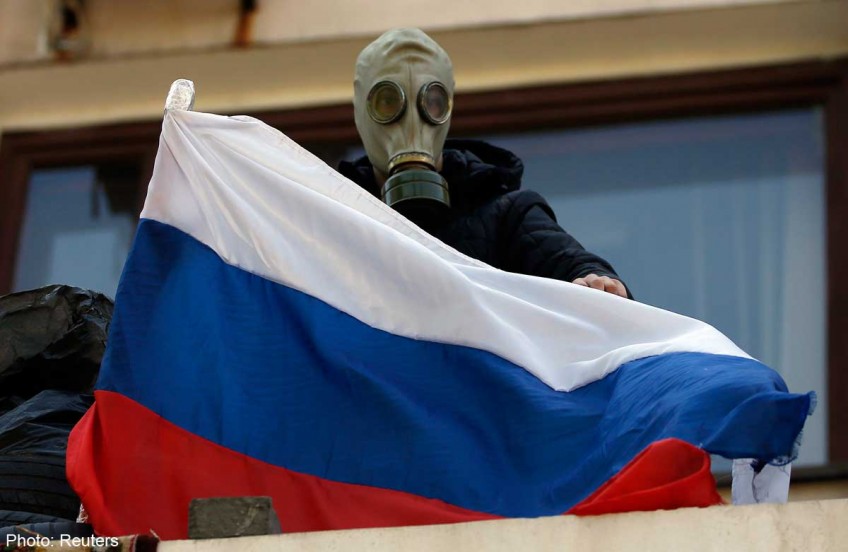 A pro-Russian man stands guard at a barricade in Slaviansk.

Life is cheap in the rebel-held areas of Donetsk, Ukraine, where Malaysia Airlines MH17 was shot down by a ground missile.

And what makes life cheap there are what many describe as trigger-happy executioners.

The aircraft, with 298 passengers and crew, crashed near Torez, Donetsk, in Eastern Ukraine - south-east of the capital, Kiev.

Just last week, journalists who were allowed into Slavyansk - a two-hour drive from Torez - were horrified by what they uncovered.

Mr Euan MacDonald from Interfax news agency told The New Paper: "The journalists learnt of death warrants allegedly signed by a rebel commander in the city of Slaviansk.

"Two men, along with a third man who had stolen a shirt, were executed."

Added the Ukraine-based editor of the news agency's English section: "Civilians get killed in the crossfire between pro-Russia rebels and Ukrainian soldiers. To hear about 10 to 20 deaths every two days is normal."

The Ukrainian authorities have accused the estimated 10,000 rebels of being trigger-happy and firing on civilian areas to provoke outrage. By doing so, the rebels hope to get Russia into the fray.

"The rebels are mostly Russian mercenaries with basic military training. But mistakes are made in war all the time," said Mr MacDonald, alluding to the shooting down of MH17.

The skies over Donetsk may still be under a cloud of uncertainty since the rebels are said to have seized missile batteries previously held by government forces.

Retrieving the aircraft's black box would be difficult, especially when there's still a war being waged there.

Added Mr MacDonald: "If the authorities can get their hands on the flight recorder, then we can learn pretty quickly what happened to MH17.

"People here are shocked, too, at how all this could have happened. I can't think of any reason (that MH17 was shot down) other than assume it was a mistake."