10-month baby in Malaysia dies after fall at babysitter's house

MUAR - Ten months ago, Naufal Amsyar was born at the Sultanah Fatimah Specialist Hospital. Yesterday (July 21), the cherubic firstborn of Nabil Fikri Anwar and wife Noraziqah Rahman died - four days after being admitted for injuries to his head.

Naufal is said to have had a fit and collapsed while under the care of his babysitter. He was rushed to the hospital on July 17.

This is the second case of fatality involving an infant while under the care of a nanny this month.

On July 3, police found the body of five-month-old Adam Rayqal in the freezer of his babysitter's house in Batu Caves, Selangor.

A post-mortem revealed that the baby had died of brain haemorrhage. He also had a skull fracture.

The babysitter was charged on July 14 for abusing and concealing his death.

In the case of Naufal, police detained the 35-year-old nanny on Thursday to assist in investigations into the case.

For four nights, the parents of Naufal kept vigil over their only child.

"Initially, we had hopes that Naufal would recover," said Nabil.

"But, it was not meant to be,'' he told reporters outside the Sultanah Fatimah Specialist Hospital Forensic building here.

Nabil said he and his wife Noraziqah, 28, accepted fate and that Naufal was no longer around.

However, the 28-year-old father does not blame anyone, not even the babysitter over the death of his baby.

"I leave it to the relevant authorities to conduct a thorough investigation to identify the cause of death,'' he said.

Nabil said Naufal had fallen twice from a cradle at his babysitter's house.

He said if the post-mortem revealed that the death was unintentional, the family would accept the results.

"But, if my son was abused, let justice prevail."

Doctors had found injury marks on Naufal's forehead, blood clot in his eyes and a crack in his skull. 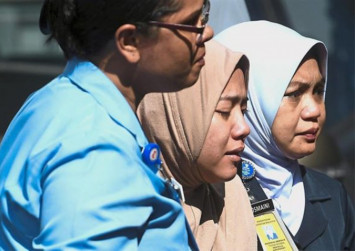 Earlier, Nabil said that the babysitter had told him that Naufal collapsed after eating porridge prepared by his wife.

"The babysitter told me that my baby's eyes were wide open and there was no reaction.

"Initially, she suspected that he had choked while eating.

"But it was only after he was admitted to the hospital that we were made aware that he sustained injuries after falling from the crib," he said.

Nabil, who is an enforcement officer, urged the public not to speculate on the incident until police had completed their investigations.

Nabil said he did not know the babysitter well and only got to know about her through his wife. Noraziqah had asked around on Facebook for recommendations before sen­ding her baby to the nanny.

Noraziqah posted Naufal's passing on her Facebook with a poignant note. "I had carried him in my tummy for nine months and only managed to raise him for 10 months and five days.

"You were born here (in this hospital) and you also left me and your father forever at the same place," wrote Noraziqah.

Naufal was buried at the Bukit Kontang Muslim cemetery in Tangkak, here.