PETALING JAYA - Some 14.4 million Malay­sians will be casting their votes today from 8am to 5pm at 28,115 polling streams nationwide.

They are part of the country's 14,940,624 registered voters who are eligible to cast their ballots in this general election.

Of that number, 278,590 are advance voters who cast their ballots last Saturday.

Gen Y voters, or those aged below 40, comprise 40.94 per cent of the electorate and are the biggest age group among the voters.

A total of 2,333 candidates will be contesting 222 parliamentary seats and 505 state seats.

Read Also
No income tax for those under 26, 2 public holidays, and no toll charges for 5 days during Hari Raya, says Najib 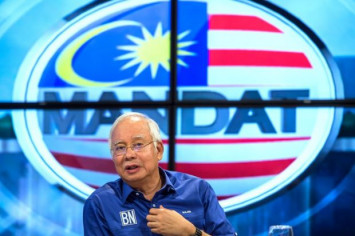 The Election Commission (EC) has said that it expects to announce the results from 8pm.

A simple majority of 112 parliamentary seats will be needed to form the Federal Government.

The Star will provide updates on polling and results on its portal www.thestar.com.my.

12.30pm: As of 11am, the turnout rate of voters in Perak is at 34.79%, according to a short statement issued by the Perak Election Commission.

9.37am: Datuk Seri Najib Tun Razak has cast his vote for the Pekan parliamentary seat. The Barisan Nasional  chairman arrived at his polling station Sekolah Sains Sultan Ahmad Shah at 9.20 am together with his wife Datin Seri Rosmah Mansor. Najib was all smiles when he was greeted by other voters who were present at the station. The Barisan chief is in a four-cornered fight for the Pekan seat.

9.30am: Incumbent Rembau MP Khairy Jamaluddin Abu Bakar arrives at SMA Hj Mohd Yatim in Ulu Gadong to cast his ballot. However, after queuing up for 20minutes, Khairy decides to leave to visit other polling centres in Rembau. He will return to his polling centre later in the afternoon to vote.

9.29am: PKR president Datuk Seri Dr Wan Azizah Wan Ismail has voted in SK Seri Penanti in Permatang Pauh here. After casting her vote, she immediately left and returned to Selangor where she is contesting for Pandan parliamentary seat there.

Her daughter Nurul Izzah Anwar, who is two-term Lembah Pantai MP, is contesting the Permatang Pauh parliamentary seat in GE14. She voted in SK Bukit Bandaraya in Kuala Lumpur and is expected to return to Permatang Pauh later this afternooon.

9.13am: Datin Paduka Chew Mei Fun joined hundreds of voters up early to cast their votes in SMK Mahmud here.

9am: Flamboyant celebrity Azwan Ali points out wrongly tagged ballot boxes as he was about the cast his vote at Sek Keb Klang Gate in Setapak, Kuala Lumpur. He noticed the mistake where yellow ballot papers were in the box tagged "Parliament" and orange ballot papers were in the box tagged "State". "It should be the other way around," he said. "This kind of mistake will get the people riled up."

Azwan who is running for the Bukit Antarabangsa state seat in Selangor barely missed bumping into his brother Datuk Seri Azmin Ali who arrived with his wife Shamshida Taharin to cast their vote at the school. "You journalists don't forget to go and vote too, don't just work only, because every vote counts," he told reporters. Dr Sim, who is Sarawak United People's Party (SUPP) president, is facing state DAP chairman Chong Chieng Jen, who cast his ballot at SMK Kuching High at 8.45am.

8.35am: Barisan Nasional candidate for Setiawangsa parliamentary seat Tan Sri Zulhasnan Rafique arrive at SK Setiawangsa with his family to cast their votes. 8.03am: Miri SUPP candidate Datuk Sebastian Ting voted at 8.03am at SK Bintang.

8am: PAS president Datuk Seri Abdul Hadi Awang, who is defending his Marang parliamentary seat, arrives at SK Rusila in Marang to cast his ballot.