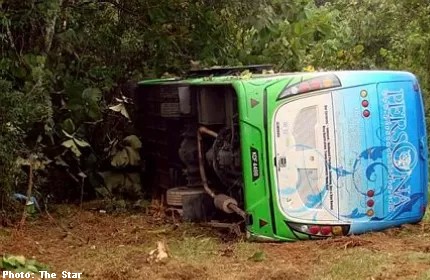 The express bus that overturned along the North-Sourth Highway near Simpang Renggam this morning.

JOHOR BARU - Two men died, while nine others were injured in two separate incidents in Kulaijaya and Simpang Renggam here in the past 24-hours.

In the first incident, Wan Seng Tim, 41, who was driving a Honda City car and Yap Kok Chin, 44, who was the front seat passenger, died on the spot when the car they were in crashed into a tree at Kilometre 26 of Jalan Kulai-Senai at about 12.10pm on Saturday.

Chai Nyet Chiew, 51, who was sitting in the rear seat, suffered injuries.

Meanwhile, eight people were injured when the express bus they were in overturned along the North-Sourth Highway near Simpang Renggam today at 8.15am.

Kluang district traffic police chief Assistant Superintendent Azmi Suratmat said, the express bus which had 40 passengers and was travelling from Alor Star, was believed to have been tailgating another vehicle.

The bus had earlier stopped at the Machap Rest and Recreation Area to fill up petrol and to change the driver.

Azmin said the driver lost control of the bus when the vehicle came to an emergency halt.

In panic, the driver swerved to the side and the vehicle overturned by the side of the road.

Of the eight who were injured, three were locals, three Myanmar nationals and two Thais.

All the injured were sent to the Temenggong Seri Maharaja Tun Ibrahim Hospital in Kulaijaya for treatment.