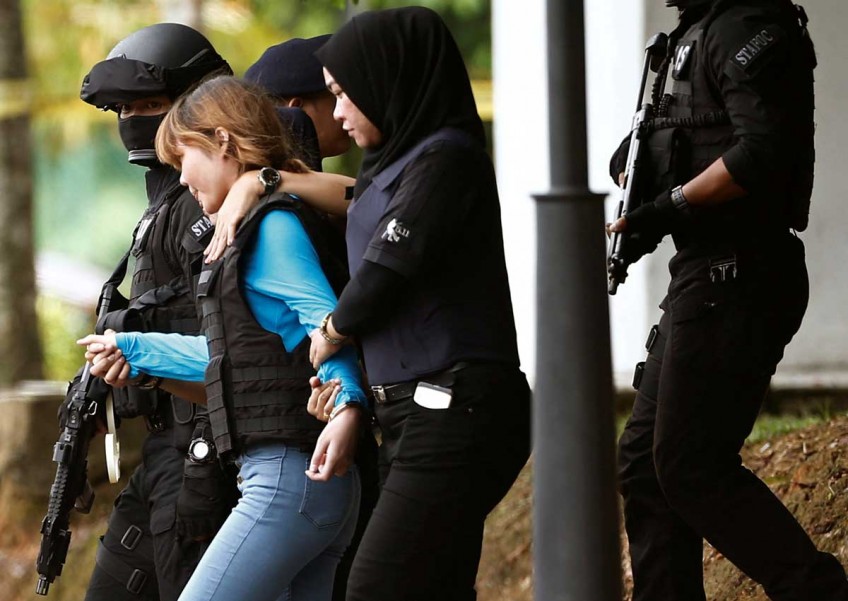 KUALA LUMPUR - Two women accused of assassinating the estranged half-brother of North Korean leader Kim Jong Un with a banned nerve agent pleaded not guilty at the start of a high-profile murder trial in a Malaysian court on Monday.

Indonesian Siti Aisyah, 25, and Doan Thi Huong, 28, a Vietnamese, are charged with killing Kim Jong Nam by smearing his face with VX, a chemical poison banned by the United Nations, at Kuala Lumpur's international airport on Feb. 13.

Both women wore bullet-proof vest as they were led into the court on the outskirts of the Malaysian capital. They face the death penalty if convicted.

The two women nodded their heads when the charge was read out to them at the Shah Alam court on the outskirts of the Malaysian capital.

Siti was dressed in a black floral suit, while Huong wore a white long-sleeved t-shirt and jeans.

The prosecution said in its charge sheet their actions showed "intent to kill the victim" by smearing his face and eyes with VX nerve agent, which a post-mortem confirmed had killed Kim.

Defence lawyers demanded that the prosecution immediately name four other suspects who have also been charged in the case but who are still at large. The prosecution said their identities would be revealed during the trial.

The women had told their lawyers they did not know they were participating in a deadly attack and believed they were carrying out a prank for a reality TV show.

They had carried out several practice runs at shopping malls in Kuala Lumpur ahead of the attack on Kim Jong Nam, the prosecution said.

"The prank practice carried out by the first and second accused with the supervision of the four who are still at large was preparation to see through their common intention to kill the victim," the prosecution said in its charge sheet.

South Korean and US officials have said that Kim Jong Un's regime was behind the murder. North Korea denies the allegation.

The prosecution also said in its opening statement that expert testimony would be presented to prove that VX was the cause of death.