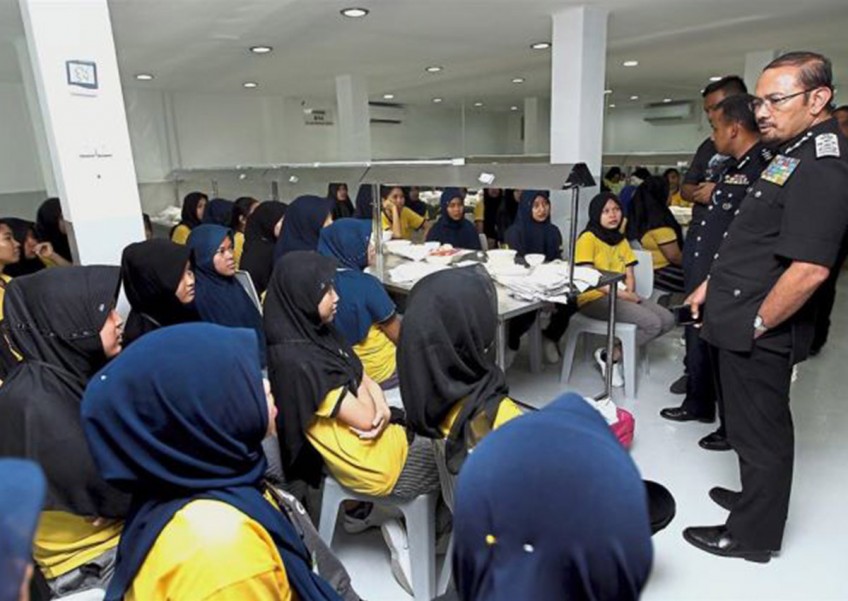 Nest of inequity: Mustafar (right) talking to some of the Indonesian workers at the bird's nest processing centre during a raid in Klang.
The Star/Asia News Network

KLANG, Malaysia - A 29-year-old man with a Datuk title who ran a bird's nest cultivation factory here has been arrested after authorities discovered that its workers were forced to work without rest days.

The Datuk and the workers were caught by surprise in the raid at the factory located at Jalan Pasar here at 10.45am yesterday.

The officers detained 172 workers in the factory, comprising 152 from Indonesia, three from Myanmar and 17 Malaysians.

The workers, aged between 18 and 40, had been working at the factory for between two and three years.

Bukit Aman Anti-Trafficking in Persons Unit chief DSP Hadzwan Zulkefle said officers carried out a three-week long surveillance of the factory following a tip-off that the workers were forced to work long hours without being paid for the extra hours they put in.

He added the factory's business owners had broken various laws, such as forcing the foreign employees to work some 16 hours a day.

"The premises have been operating since 2014 and the workers were suffering from mental torture due to daily overtime, with a few fainting due to fatigue," he added.

"We also found that the deductions to their salaries were excessive and the workers were also forced to work on their rest days," he added.

Hadzwan said the case was being investigated under the Anti-Trafficking in Persons and Smuggling of Migrants Act 2007, the Immigration Act and the Employment Act.

The Datuk is being detained under the Anti-Trafficking in Persons and Smuggling of Migrants Act 2007 as well as the Immigration Act, among others.

Immigration Department director-general Datuk Seri Mustafar Ali, who was also present, said his department will not compromise with any employer that enslaved foreign workers.

He said this was to protect Malaysia from being labelled as a country that was involved in human trafficking.

"We will freeze the bank accounts and assets of such companies as retribution and as a lesson for other employers," he said.