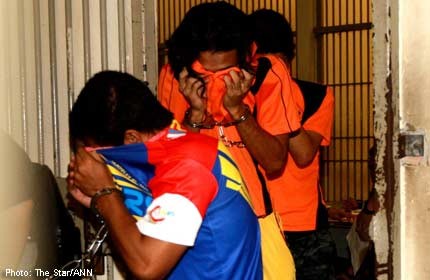 Megat Farzeril was charged with raping the woman at about 4am, Mohammad Shaizzad at about 4.05am and Adib at about 4.10am in a room in Enggang Block at Second College, Universiti Putra Malaysia in Serdang on July 4.

They were charged under Section 376(1) of the Penal Code.

Family members cried and hugged the three who were clad in orange sports jerseys when they were brought into the courtroom yesterday.

"Therefore, there is a tendency the trio will harass the witnesses," he said.

In seeking a lower bail, counsel Stephanie Wong, who appeared for Adib, said her client's father, who was a lorry driver, would post bail.

Counsel Datuk Suraj Singh, who appeared for Megat Farzeril and Mohammad Shaizzad, said the former, helps his mother who is a trader and had to support his four siblings with a RM800 (S$318) monthly salary.

He said Mohammad Shaizzad, a student at a college in Gombak, lived with his mother in Selayang.

The courts later granted bail at RM10,000 in one surety each and fixed Aug 20 for mention.

The three judges ordered them to report to the nearest police station once a month and not to harass the prosecution witnesses or the woman.

Ranjit Singh and Brian Ho are holding a watching brief for the woman and her family.